“GUILTY.” A man is sentenced to death in front of your very eyes. Then comes the audible gasp of the audience as the stage in front of them transforms into a gallows and a terrified young man screams his innocence as he looks deep into the abyss below. The audience is mortified…what if he is innocent? What if the jury have got it wrong? Are they sending an innocent man to his death? 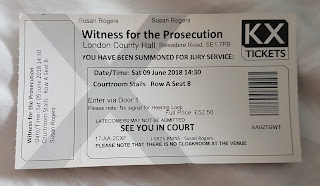 Witness for the Prosecution was adapted for the stage by Agatha Christie and the premiere was held in 1953 in the Winter Garden Theatre, London. Peter Saunders, Christie’s theatre producer, had suggested that she adapt her short story “Traitor Hands” for the stage. Her response was to tell him that if he wanted a play he’d have to write it himself. Saunders duly took up the challenge, but Agatha was not impressed with his work, dismissing it and writing it again from scratch.

Leonard Vole has been accused of murdering a wealthy widow for her money. This is life or death for Vole. As each witness is brought forward, can he convince the judge and jury (and the audience) of his innocence? Both the setting and the outstanding performances from all involved keep you gripped throughout the proceedings. In a tale of murder, passion, betrayal and justice, the scales keep falling from one side to the other and his life hangs in the balance. 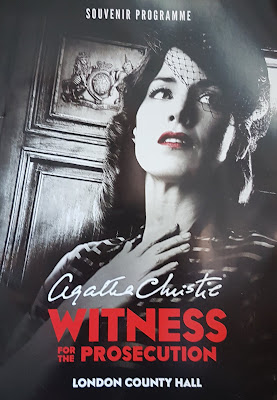 On the one hand you can watch the play as a nice Agatha Christie Who Dunnit, but on the other hand it leaves you wondering about how flawed the justice system is. People are so easily manipulated. In these days of a consumerist society, we are so easily swayed into buying or even doing things that we don’t want/to do. We’re unable to say no to our children anymore for fear of being disliked or embarrassed as we’re screamed at and publicly humiliated. In a society that now seems to be unable to think for itself, what makes us believe that our justice system is fair? What if a jury could be so easily manipulated…what if the jury members can’t face the prospect of perhaps being the only one in the room to stand their ground for what they believe to be the truth?

A good criminal can ensure that their lawyer believes every word that they say. A good lawyer, a lawyer that has been taught to win an argument, counter every move, dispute the oppositions claims, has the ability to throw a jury off the scent. But just because the lawyer can win the argument, it doesn’t mean that justice is done or that all of the evidence in the trial is valid. Truth, can be twisted. The “facts” presented to the jury can see an innocent person hang and a guilty person walk free. 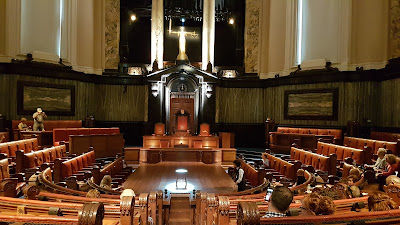 Watching a murder mystery play staged in a court room as historic and beautiful as London County Hall is not to be missed. From the moment you are summoned to take your seat (a plush leather seat where no view is a bad view) you feel as though you are inside The Old Bailey. It is mesmerising watching this small stage space transform from dock to chambers and back again, but it is also a reminder that the law is based in theatrical rituals, if it wasn’t; there wouldn’t be so many court room dramas on the TV schedule. The set, the production and even the echoed sound of usher’s summoning the witnesses to the stand, all reinforce that we are in a criminal court rather than a theatre.

Witness for the Prosecution is an entertaining play, with a thoughtful and unsettling reminder about how many innocent people may have seen the hangman’s rope. The play has been extended until March 2019, and it is definitely worth seeing, whether you are a fan of Agatha Christie or not. You have therefore been summoned. I’ll see you in court!

https://www.witnesscountyhall.com
Posted by Sioux Rogers at 21:25 No comments: 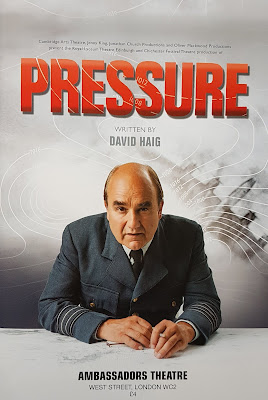 We Brits do love to talk about the weather. It’s like some compulsion programmed into our DNA to call over to complete strangers “lovely weather we’re having” or “I don’t like the look of those clouds, storm approaching don't you think?!”

So, on this grey, overcast day, with the wind blowing the washing dry (perfect weather for a washing day) I’m sat in the garden with a cup of tea reflecting about the weekend that has passed and the various plays I have seen.

I don’t recall learning much about WWII at school. My dad loved war films and war planes, especially Spitfires and so most of my teachings probably came from him. A few years ago, I stayed at a friend’s house in Normandy and we visited the beaches of Gold, Omaha, Juno, Utah and Sword. We drove up to Pegasus Bridge and the museum there and so I knew a little bit about how weather had played an important part of the D-Day landings, but I wasn’t fully aware of James Stagg’s involvement in the success of the mission.

David Haig has changed all of that with his play, Pressure, which tells the story of Dr James Stagg, a Scottish meteorologist charged with forecasting what the weather would be like on Monday 5th June 1944. Weather forecasting had been around since the 1860’s, but the science behind it was still in its infancy. Stagg was convinced that changes in Earth’s magnetic field affected the upper atmosphere which in turn effected the world's weather. His work led him to holding the position of Chief Meteorological Adviser to the supreme commander of the allied forces in Europe. Stagg was charged with forecasting the weather conditions for the D-Day landings, a task confounded by working with Colonel Irving P Krick, an American meteorologist who had conflicting views and opinions on what conditions would be like on 5th June 1944. 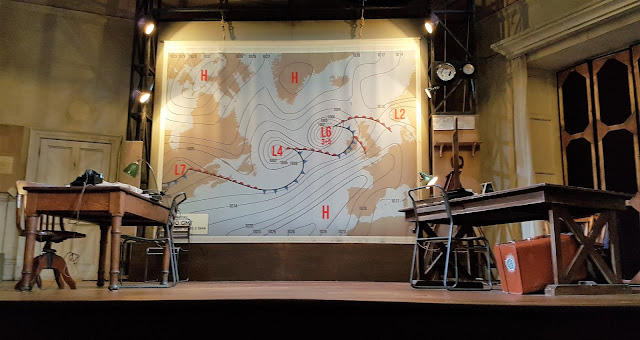 Krick had been employed by the US Strategic Air Forces in Europe in the Weather Information Centre. He joined Stagg as part of General Dwight Eisenhower’s team, however, his methods were dramatically different to those of Stagg, preferring instead to pay attention to historical weather charts rather than embracing new science.

So whose word are you going to follow? The man of new untrusted science, or the man who thinks the weather will follow a similar pattern to his previous years charts? The play beautifully illustrates the pressure that Stagg, Krick and Eisenhower were under to ensure that the D-Day landings would be as successful as possible. David Haig plays the brusque, bad-mannered Scot who as the play unfolds becomes this endearing character that you cannot help but warm too. It was his tenacity that made Eisenhower listen to him. Stagg stood his ground, he didn’t tell Eisenhower what he knew he wanted to hear like Krick did. Stagg believed in himself, and with that he helped save the lives of potentially 80,000 men, by predicting the violent storms that would have capsized the flat-bottomed boats that were due to ferry men across the English Channel. 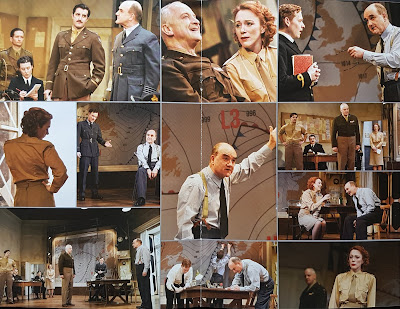 This was a beautifully written piece of history, both compelling and laced with humour, showcasing what was a severely stressful situation people were under. The scenes between both Eisenhower (Malcolm Sinclair) and Kay Summersby (Laura Rogers) and  Stagg and Summersby were particularly poignant and added depth and humanity to the piece.

As I write, the great British weather does its thing…the sun is now poking it’s head from behind a cloud trying to make up for the morning misery. As Stagg tried to explain to Krick:- "Ten o'clock in the morning, it's baking hot, the beach is packed. By midday, there's a howling wind and the Punch and Judy man has packed up for the day. By two o'clock, the rain is horizontal, but by four o'clock...the sun is beating down again and it's eighty degrees. Nothing is predictable about British weather, that's why we love to talk about it." 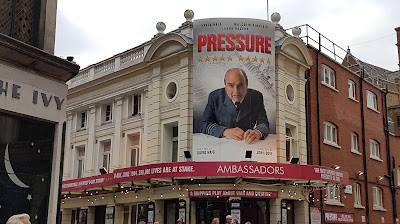 And despite our unpredictable weather, a man was asked, without the aid of modern computer charts, to predict the weather in the channel to save the lives of men. Who say's the British weather is boring?!  (And yes...we did go to The Ivy for dinner first!)

Pressure is playing at The Ambassadors Theatre, London until 1st September 2018.

Posted by Sioux Rogers at 14:22 No comments: