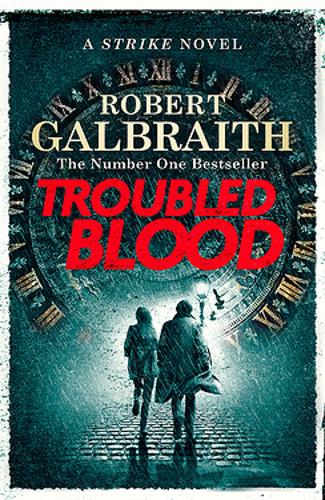 2020, the year of constant surprises. I’ve never been a huge JK Rowling fan (I mean her books, not the person.  I’ve never met the woman so I can’t comment on her personally, unlike the Twitter dunderheads who like to misconstrue everything they read.) I have to give her credit for her vivid imagination and her wealth of knowledge and the amount of research she must undertake before putting pen to paper, but for me, her writing is prone to too much repetition which detracts from what could be an excellent read.

So why do I read the Strike books if I’m not a fan of her writing? Easy. Tom Burke plays the lead in the TV adaptations and with it he has brought an interesting, complex character to life, one full of charm, charisma, and sparkle. I’ve become invested in the character; I want to know what the next instalment is about and what the future holds for Strike. So, for me to keep up with Strike, and to not feel like I’m wasting any of my day, I turned to Audible books for both Lethal White and Troubled Blood. This way I could go for a walk or do chores and “read” at the same time. 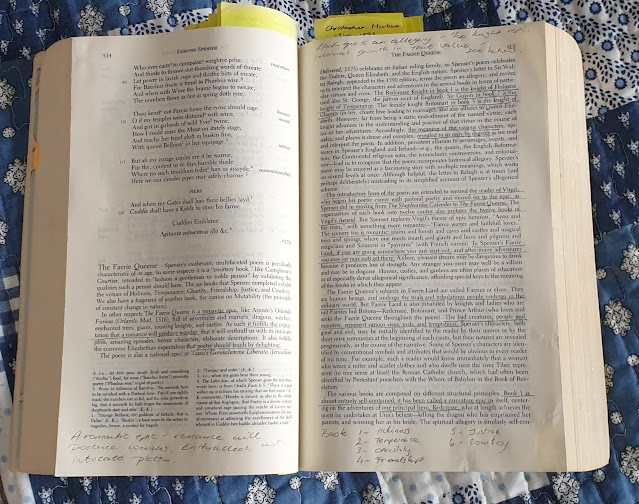 As the orotund voice of Robert Glenister began permeating my ears, I realised that the format of this book was to be the same as the others. Each chapter to be preceded by a quotation…this time it was Edmund Spenser’s The Faerie Queen. I hit pause, puzzled. It rang a distant bell in my memory and so I trotted over to the bookcase and pulled out my battered Norton’s Anthology of English Literature. Ah yes…there it was…battered and having obviously seen all of its 25 years of service, there was the page marker for Edmund Spencer, and more importantly the Cantos of The Fairey Queen. Forgetting I was supposed to be listening to Strikes adventures, I started pouring over the old verses and the associated notes I’d scribbled throughout the margins.

Anyone familiar with Chekov will undoubtedly remember his principal “If in Act One you have a pistol hanging on the wall, then it must fire in the last act.” As we enter Strikes world for the fifth time, we find him in Cornwall, visiting his terminally ill aunt, and catching up with his oldest friend Dave Polworth in the pub. The question of marriage arises, and in the defence of marriage, Polworth quotes from another Russian literary giant, Tolstoy’s Anna Karenina.  With Strike coming back to his childhood “home” Cornwall and all the people he loved there, Robin dealing with a long and acrimonious divorce, and Strike’s ex Charlotte causing him no end of emotional reckoning, surely the poignant quote must have a bearing by the end of the novel. Or is JKR following Hemingway, whereby inconsequential details are just part of the plot?

In a departure for Strike and Robin, they take on the 40-year-old cold case of a doctor who mysteriously vanished one night. The client gives Strike a year to solve the case, and what a year it will be for both Cormoran and Robin. Many of the original witnesses for the case are dead, and for those still alive, how accurate will their memory of events be? Looking through the notes of the original chief detective on the case, it was apparent he was suffering with his mental health. Were his notes a sign of madness, or was there something more to his readings of tarot and astrological charts?

Falling Angels in the Garden of Good and Evil (John Berendt) 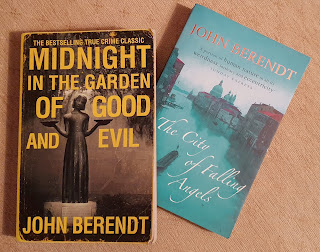 The last holiday I partook was a week up in Scotland (Lauder) last Christmas. It was sublime; a chalet in the middle of a working farm, bedecked with Christmas trees and lights, and surrounded by various livestock. Being December, it meant there were long evenings in which to amuse oneself, and whilst it was the perfect setting to sit in a hot tub every night, there’s only so much wallowing and Prosecco that can be consumed in a week. I needed a book to read and the novel I'd grabbed and chucked into my rucksack this time was:

Midnight in the Garden of Good and Evil by John Berendt

The book is based on a true story, a crime classic published in 1994, set in a world of highly original literary characters who only required the author to weave their tales together to produce this compelling gothic tale of a Savannah society. Settling back on the veranda of the lodge, mug of tea in hand, I travelled to America to be alarmed, entertained and to laugh out loud with these overtly colourful characters.

The main narrative of the book is the shooting of Danny Hansford. Shots are heard ringing out of the home of respected antiques dealer Jim Williams in the early hours of 2nd May 1981. For a decade, the question that required an answer was whether the shooting was murder or self-defence. Jim Williams maintained that the killing was in self-defence and that Danny (his employee and also a male prostitute) was prone to losing his temper, and, on this occasion, had grabbed a gun that was on display and pointed it at him. He had therefore shot back to protect himself and he testified that the murder had not been premeditated in any way. The complexities around the shooting, and a desire for the truth led to four murder trials taking place; the fourth eventually being moved outside of Savannah so that a different jury could be sworn in.

“there is truth in the Hebrew fable, that the knowledge of Good and Evil brings forth Death.” Alestair Crowley 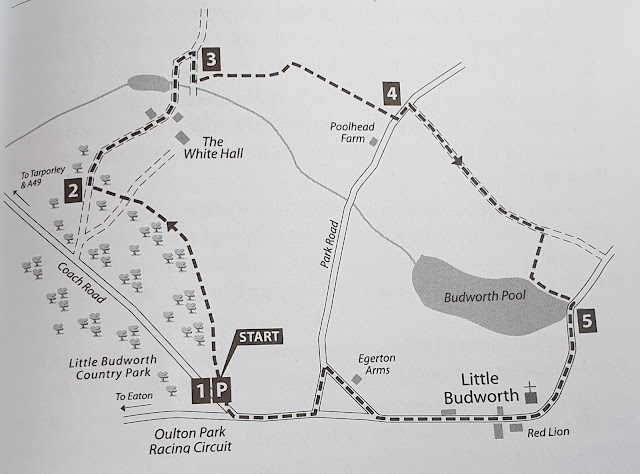 “I thought we could do a walk in Little Budworth and hopefully find a spot by the lake for a picnic.”

In Norman times, much of Cheshire was covered by four forests. To the west was Wirral Forest which had been substantially cleared, Macclesfield Forest covered the east Pennine slopes, whilst the central part of Cheshire was covered by the forests of Mara (now Delamere) and Mondrum. Back in those times, forests were no more than wastelands which were protected by laws so that the privileged may hunt in them. The forests were a patchwork of mixed oak woodlands and open lowland heath dotted with meres. Up until the 14th century, wolf packs could be found hunting amongst the cover of the trees, and both red and fallow deer grazed the lands until they were hunted out during the 17th century Civil War. Rare birds such as merlins, hobbys and sparrowhawks graced the skies, whilst swarms of bees gathered nectar for honey. Until the 1800s, Little Budworth was called Budworth-Le-Frith, from the Welsh for woodland ffridd. By the 17th century, as the forests were cleared and settlements began to spring up, Mondrum was no longer forest…that is, apart from the most worthless part, Little Budworth Common. This was the last vestige of the forest to remain standing, and this was where today’s walk was going take us. 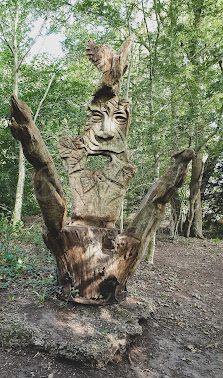 For once, the guidebook showed what looked like an ample sized carpark. This didn’t stop me from driving straight past it, and having looked in my rear-view mirror, I screeched to a halt and reversed back up the road to turn into it. Kate arrived shortly after, and after dancing around the carpark with the “are we, are we not allowed to do huggy hello’s” nonsense, we got our walking boots on and checked what the book said about the start of the walk.

“From the car park, go through a narrow gap in the fence, on the opposite side of the car park to the toilets, and walk past the large sculptured chair.”

“Ermmmm, I can’t see a fence” I stated. “When it says opposite the toilets, does it mean like directly opposite…or does it mean where that large wooden board is that’s kinda to the right of the toilets??” Kate looked non the wiser and just shrugged. Hmm…. “let’s go investigate the big wooden board” I suggested. (Oh this walk was going brilliantly, we couldn’t even find our way out of the car park!) “I think we should go in here” I suggested, and a few metres later I suddenly spied a large sculptured chair and nearly wet myself with excitement. Suddenly I felt like Anneka Rice on Treasure Hunt. All was not lost and it seemed neither were we, as we strode off confidently on the start of our 3 mile walk around the village of Little Budworth.

Travels with my Aunt by Graham Greene

How annoying. You listen to a book. Write a few paragraphs about it, and then get distracted whilst supposedly looking for a suitable visual aid. Several weeks later you realise that all your thoughts are still sitting there unpublished!!!

Graham Greene is possibly best known for his seminal works like The Power and The Glory, Brighton Rock and The Third Man. I can’t pretend to be an authority on his work, I read Brighton Rock whilst still at school and a few other extracts from various novels for “comparative purposes”, and whilst I’ve never read The Third Man, I admit to enjoying the filmed version starring Joseph Cotton and Orson Welles.

Greene apparently wrote Travels With my Aunt as a bit of fun and a departure from his normal style of writing. His work often involved fragile, flawed characters that found themselves in distant lands; so this novel is no different in that respect, however, it’s impossible to try to tie Greene down to one stylistic genre. For those who have read nothing by Greene before, this humoristic jaunt in Travels With My Aunt is not like his other writings which are very dark. Traces of darkness are evident in this book and they give an interesting insight into the authors character.

She is a rebel, he a conformist.

Henry Pulling is a single, retired bank manager; a straightforward, honest man, whose greatest pleasure is growing dahlias in his garden. He is a man who lives a quiet and sheltered type of life, who has seldom left the British shore he was born on. It is at his mother’s funeral that he encounters his long-lost Aunt Augusta, a formidable woman, equally glamourous and eccentric, who has rather a bombshell to deliver Henry whom she has not seen for over fifty years.

Ally’s relationship is over, and she’s taking the cat... 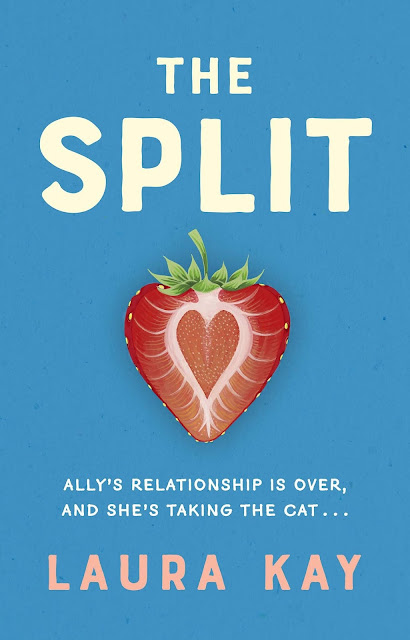 When this book appeared in my in-tray, it was the comment about the cat that grabbed my attention. The cover didn’t interest me, nor the title, but the idea of someone storming off having found out that they have been betrayed by a loved one, cat whisked underarm, really appealed to my sense of justice.

Romantic novels (or RomComs) are not the typical genre of book I’ll head towards in a bookshop; however within reading the first few pages, I realised that Laura had written a rather special novel which kept me engaged throughout the course of the story.

The Split is a story of love but not your typical romance, it is about the strongest love of all…friendship. It doesn’t really matter what life throws at you if you have a strong support network of friends and this novel highlighted this.

Ally lives with her girlfriend on a houseboat in London; that is until one morning when she is brutally dumped by Emily. She announces she is going to spend the night at her “friends” house and leaves Ally to wallow in self-pity, despair and confusion. Now homeless, jobless, friendless and unable to face Emily’s return the next morning, Ally bundles up her belongings and decides to head home to Yorkshire to stay with her dad. She’s not going home alone though; she bundles Emily’s cat Malcolm into his carrier and heads off to the train station with suitcase and cat in tow.