Travels with my Aunt by Graham Greene

How annoying. You listen to a book. Write a few paragraphs about it, and then get distracted whilst supposedly looking for a suitable visual aid. Several weeks later you realise that all your thoughts are still sitting there unpublished!!!

Graham Greene is possibly best known for his seminal works like The Power and The Glory, Brighton Rock and The Third Man. I can’t pretend to be an authority on his work, I read Brighton Rock whilst still at school and a few other extracts from various novels for “comparative purposes”, and whilst I’ve never read The Third Man, I admit to enjoying the filmed version starring Joseph Cotton and Orson Welles.

Greene apparently wrote Travels With my Aunt as a bit of fun and a departure from his normal style of writing. His work often involved fragile, flawed characters that found themselves in distant lands; so this novel is no different in that respect, however, it’s impossible to try to tie Greene down to one stylistic genre. For those who have read nothing by Greene before, this humoristic jaunt in Travels With My Aunt is not like his other writings which are very dark. Traces of darkness are evident in this book and they give an interesting insight into the authors character.

She is a rebel, he a conformist.

Henry Pulling is a single, retired bank manager; a straightforward, honest man, whose greatest pleasure is growing dahlias in his garden. He is a man who lives a quiet and sheltered type of life, who has seldom left the British shore he was born on. It is at his mother’s funeral that he encounters his long-lost Aunt Augusta, a formidable woman, equally glamourous and eccentric, who has rather a bombshell to deliver Henry whom she has not seen for over fifty years.

As Henry begins to become acquainted with Aunt Augusta, he realises she is the opposite of him, she has a huge appetite for adventure and an even greater desire to tack down her old flame Mr Visconti. Aunt Augusta is the woman who has done everything, amorality and illegality do not phase her. She is a rebel, he a conformist. It is due to Aunt Augusta that Henry makes a life changing discovery – travelling. 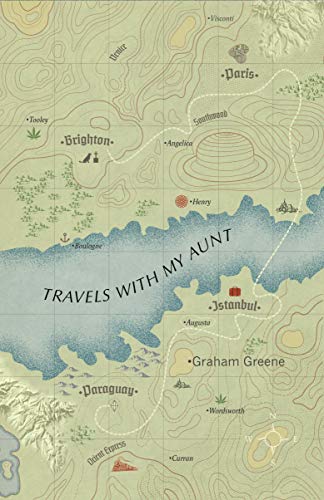 Reading the book, I thought it would make a fabulously entertaining play, but after doing a bit of Googling, I realised I’d missed that boat. The play had been first performed at the Citizen’s Theatre – Glasgow, in 1989 (a rather tenuous link to Tom Burke for any fan who went to see him read William Tell at The Bunker Theatre) and again in 2013 at the Menier Chocolate Factory – London.

Oh I know the feeling Henry! I read Travels With my Aunt during my August holiday break. It seemed rather fitting to read books about faraway places whilst sitting on the sofa. (I say holiday in the sense that it was a few days off work sat at home…which is pretty much no change from the rest of the year then.) I think the weather was only suitable for one day trip out in the whole week, which resulted in the picnic basket being cleared of mothballs and a determination that we were going to eat al fresco if it killed me. To be fair, we only popped up the road to a local mountain and the climb did finish me off, as I am now both more unfit and overweight thanks to a very sedentary year due to Welsh Covid-19 restrictions. As I sat on top of the mountain taking in the views, I wondered…will I ever get to see the sea again, or take a flight abroad? I suppose the least I could do was to enjoy Henry’s distant travels even if I couldn’t partake in my own.

Aunt’s in real life are never like literary Aunts. Between the pages of a book, literary aunts are always tough cookies. Whether they are battle-axes, cruel, domineering, inspiring or intoxicating, you can be sure that they will never do anything by half. The first words Aunt Augusta says shows that Greene’s aunt is a classic of the literary breed. “I was once present at a premature cremation.” You already know that this is a woman with stories to tell, a life fully lived, but it is still with surprise that she goes on to tell Henry that his mother was probably a virgin, his father was most certainly not, and that he’d best come round to hers for a strong drink.

So why are aunts more interesting than mother’s for authors to write about? I imagine it’s because they are like grandparents…they have fun with children and can break the rules. Parents have to be the voice of authority and that can be seen so clearly in this book. Under Henry’s mother’s tutelage, Henry was a dutiful son who lived at home, had a dull job in a bank (trust me - working in a bank for over 20 years becomes very dull and soul destroying – you stop being a person full of imagination and turn into some corporative idiot) and he missed out on a life full of fun and adventure. Within weeks of meeting his Aunt Augusta, he has the police turning up on his doorstep, he has smuggled money abroad, smoked weed for the first time and learnt about Parisian brothels! (I thought I’d become more adventurous after leaving the bank, turns out I’m a novice in comparison.)

Greene, however, has made Aunt Augusta a far more nuanced character than the typical literary aunt. She is a caring individual who ran a church for dogs; she is highly entertaining but with an acerbic tongue. When she orders drinks on a flight, the attendant tells her they are about to land, her quick retort is "The more reason for you to hurry, young man." Why can’t I be that self-assured in such situations? I might be a little bit cheeky from time to time, but there is a line which I don’t have the guts to cross…or more precisely I was brought up to be polite and to “think of others before yourself.” In most situations if asked what I would prefer I say, “I don’t mind.” I mean generally I don’t mind, I’m quite easy going, but I can’t imagine for one moment Aunt Augusta saying that. I’ve surrounded myself with the Aunt Augusta types before – I admired these people with a conflicting sense of awe and disgust at their rudeness and then berated myself for thinking that having the confidence to say what you want is rude.  Aunt Augusta is human, she isn’t perfect, in fact she’s a pretty despicable character if one looks at her closely enough; she’s selfish, she’s cruel, she has a strange taste in friends…on closer inspection, perhaps she isn’t a “typical” literary aunt at all.

Greene was bipolar and struggled throughout his life with depression. He spent a large proportion of his life working as a secret agent, being sent to strange places and meeting curious, disreputable people. I’m sure Aunt Augusta would have approved immensely of the people he kept company with, and I’m sure these encounters helped him create the characters poor Henry Pulling got himself embroiled with!

Greene converted to Catholicism in 1926 but he didn’t let religious views stand in his way of living the life he wanted to lead, he was an adulterer and during the 1920’s and 30’s he kept a list of names of the 47 prostitutes he had had relations with. His moral behaviour might not have been everyone’s cup of tea, but he had a strong sense of what was right and wrong, to the extent that he was outspoken against US foreign policy and had a strong hatred of injustice. One of his last books was J’Accuse: The Darker Side of Nice. It was a book about small-town corruption which led him to be sued for libel by the mayor of Nice, unfortunately for Greene, it wasn’t until after his death three years later, the mayor was convicted for the fraud that Greene had accused him of.

With Greene’s backstory in mind, it is not surprising that he created the character of Henry for a bit of fun. Henry and Aunt Augusta get to travel the world extensively, to meet the types of characters that Greene himself would have met with, so it is unsurprising that after Henry’s first trip abroad he gets home and thinks “this is nice” but then quite quickly yearns for some more excitement. He is obviously the type of person who has a natural curiosity for adventure but has always been too scared to try and just needs the moral support of someone with more experience than him.

Life is fleeting – so embrace the good times

Obviously for Henry, his life became far more interesting after meeting Aunt Augusta. I’m sure he’d have been happy at home deadheading the dahlia’s; but life is fleeting, and you should embrace whoever and whatever steps onto your timeline…even if the excitement and joy of those interactions is short lived.

Henry, under the influence of Aunt Augusta began to understand his true desires, but this came at a cost. He had forgone the chance of love with Miss Keene and so she moved to South Africa; but she continued to remain in touch with Henry, trying to keep alive that hope that they may one day reunite. As Henry’s life took on a whirlwind of unsavoury exploits, which may seem exciting but probably shouldn’t be condoned, Miss Keene’s letters started to take on a unsavoury tone. She may have seemed a dull character to Henry, but she was harmless, and she obviously loved him, she didn’t really deserve to be treated by him as she was. Her letters practically begged him to rescue her from South Africa but the Henry of her past had gone – Aunt Augusta had taught him, not only the joys of travel, but how to be callous and self-serving.

In "Travels with my Aunt," Greene has produced a novel that can be read as a bit of fun, but there are these beats running through it that prick at the conscience. Henry undoubtedly begins to lead a life that on one level has been enriched; but at what ultimate cost? Perhaps Miss Keene was saved after all!