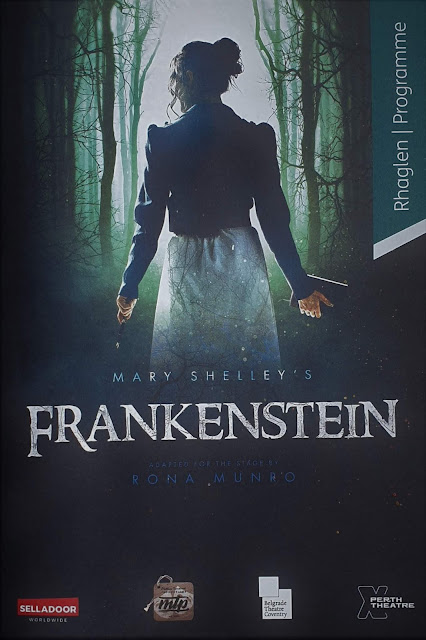 I have a confession to make. I’ve never read Frankenstein. It was on the curriculum, but I couldn’t be bothered…I read the minimum amount of Gothic Horror I could in order to get me through the semester and then I spent the rest of the time horse-riding. I’ve never watched the films, so I have no idea if they’re any good or not, although I’ve heard that the book and the films have very little in common.

I haven’t seen the National Theatre production starring Benedict Cumberbatch and Johnny Lee Miller as my preconceptions meant that I just didn’t find the tale that appealing.*  I did watch a version of Frankenstein by Box Clever Theatre Company once; it was a thought-provoking production and I thought that perhaps I should buy the book, but once again…before I could think about buying it, other tomes on the bookcase had vied for my attention and won.

Now there was something that intrigued me in the advertisement for Rona Munro’s adaptation which compelled me to go and watch it. Her version puts the novelist, Mary Shelley, right at the heart of the production. That idea aroused my curiosity…the idea of her, the creator of Frankenstein, being on stage with Frankenstein, the creator of the monster. What a spine-tingling thought!

“I do not wish them [women] to have power over men; but over themselves.” Mary Wollstonecraft

Before looking at the play, it is interesting to understand a little about Mary Shelley and novels in the era she lived. She was the daughter of Mary Wollstonecraft, herself an English writer and advocate of women’s rights. Interestingly – in her book The Vindication of the Rights of Women (1792) - she argued that women should be given an education, further elaborating that it was because women educate their children and they could also be more than mere ornamental wives to their husbands.

The book is one of the earliest known forms of feminist writing and Wollstonecraft argued that women deserved the same fundamental rights as men. What was interesting about her book, was that she argued that women were superficial because they lacked an education, and in it she launched a brutal attack on those women who had an obsession for reading sentimental novels. There were far better things women could be doing with their time than idly lying around filling their heads with saccharine tosh!