The Burketeers out on The Deep Blue Sea

June 24, 2016
It's been a little while since I'd met up with the Burketeers, so I was really looking forward to seeing the old faces back together (and of course seeing Tom on stage was an additional bonus!) I knew that as usual I would end up in a bit of a flap, because my train arrived at Euston at 12:05 and Angie had arranged for us to go on a backstage tour of The National Theatre (on the Southbank) at 1:00. It would be cutting it fine to say the least! 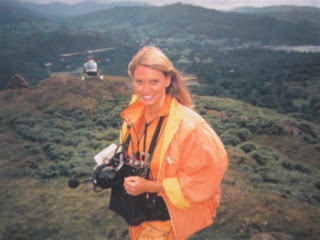 I sat cursing the chap next to me who refused to leap out of his seat as though he'd been stung by something and stalwartly just sat there letting everyone else of the train whilst he gathered his belongings together (slowly!) Once off the train I hurtled to the underground and headed to Waterloo. Surprisingly I was at Waterloo for about 12:30, so the next conundrum was if I should head to the hotel to drop off my bag or head straight to the theatre. I decided that the hotel wasn't far from the station so I'd head there, forgetting Waterloo has about 50 exits (OK, slight exaggeration). Anyway I stood looking vacantly on the roadside and decided to head left, a few minutes later I saw the welcoming sign of the Premier Inn and so I ran inside to dump my bag and ask directions for The National Theatre. The chap at reception was lovely, but again, the male of the species does not recognise the word hurry, and so he dutifully explained in detail how to get to my destination. I snatched the map off him and started running in the direction I had just come from. I felt like Anneka Rice on Treasure Hunt, hurtling off down the road, hair flapping in the wind, and a face going a strange shade of vermilion, all I needed was an orange jumpsuit. I ran to the theatre in less than 10 minutes (STOP THE CLOCK) That's the first time I've run anywhere in a while and hopefully it is the last time too!

By the time everyone else arrived I had resumed breathing in a more normal manner, however I was still in a bit of a flap and unable to get my rather funky dayglo orange safety vest on (still not a jumpsuit) for the guided tour. If ever I have felt a bit stupid, it was then! The tour itself was brilliant, and I can only thank Natalie and The National Theatre for allowing us to view what goes on behind the scenes. Natalie was very informative and it was a joy to listen to her. I was surprised that we were allowed backstage so close to the curtain going up. Props had already been laid out and we were under strict instructions not to touch anything! We got to see carved wooden decorations which were not made of wood at all, but some lite rubberised material, and into the workshops where the set designs are created.

Once the tour had finished a group of us sat and had a spot of lunch together and then we wandered slowly back to the hotel to get ready for the evening. I had heard that one of our group had not felt well on the journey down, but was feeling a bit better now. By the time we got back to the hotel, a second member of the party decided it was their turn to lie groaning on a cold ceramic tiled floor. The remainder of us sat rather worried outside the disabled toilet wondering if by 7pm there would be anybody left to watch Tom on stage that evening.

Tom obviously has a Lazarus effect on people though, no-one will miss him, and so fortunately a full complement of Burketeers met at The Lyttelton Theatre (part of the National) to watch Helen McCrory and Tom Burke perform in Terence Rattigan's The Deep Blue Sea. It was a stunning production and you can access my thoughts on the play by clicking here. http://imblatheringnow.blogspot.co.uk/2016/06/the-deep-blue-sea-national-theatre.html


"I can do things with my hands"

Once the play had finished we hurtled to the Stage Door area. There was an tabled area nearby, and two unsuspecting men said it was fine for us to join them at their table. As we looked around we saw some of our party was missing, although once they arrived, it was fair to say the two men bolted off rather rapidly! The cast were having a birthday get together after the show, so we didn't see Helen McCrory or the rest of the cast. Tom however set foot outside and a number of fans started talking to him. One of our group wandered through everyone, tapped Tom on the shoulder and said something like "We're over there when you're ready". Bless him, he came wandering around the corner to say hello to us all. As we crowded around him telling him we thought the play was very good he suddenly said "I can do things with my hands." Hmmm I bet you can Tom! 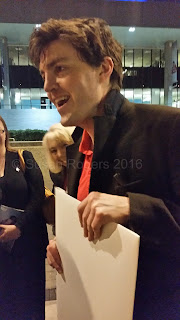 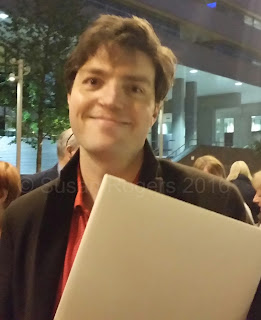 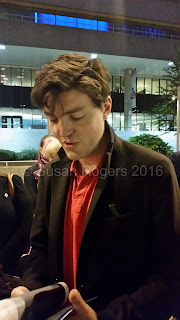 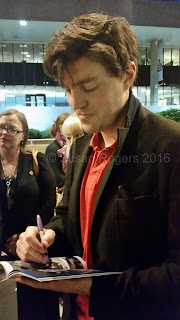 So Tom started signing autographs whilst chatting away, and then he started having pictures taken with his harem of very happy ladies. He seemed very comfortable with everyone and posed making silly faces and had lots of general chit chat with people. Normally I won't ask for a photograph, but this time I asked my friend Mel if she'd oblige. Whilst Tom and I stood huggled together he said, "you're outfit's my favourite of the night." I was sure I'd misheard, or that he was talking to someone else so the snap was taken during my mid pondering, checking he had really said it, then thanking him!  Must remember next time, don't talk just smile!!! Still the picture is a fabulous reminder that I've spoken to him again and that it isn't some dream that I'll wake out of if I pinch myself. Really I should be grateful and not worry about what I look like, there's far too many people out there yet to meet him! (It's also a piccy with him whilst he's got short hair, so that's a bonus; I've been waiting for one at a Comic Con because I'm really stupid and didn't like to ask him for a photo at Carols or Reasons to be Happy.) 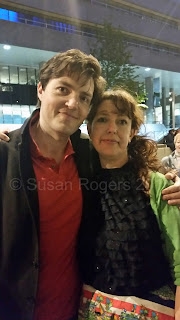 Once we finally let the poor man go, we headed off to find food. On our way down the Southbank some lady ran up to me and said "you're outfit is so cool...respect." To be honest I thought she was taking the proverbial, but apparently not. She stopped and chatted and then let me carry on. My friends Cheryl and Angie thought I knew her..."nope" I said, "never seen her in my life before!" We managed to find somewhere that was still open for food, but as per usual, it isn't a proper Burketeer night out unless we are thrown out of somewhere (church, cocktail bars, Hampstead Theatre...) so we were the penultimate people to finally leave the restaurant to wend our way back to the hotel and to stay up chatting into the small hours about how wonderful Tom is with us all!!

The day after the night before

The next day started with a lovely, lazy breakfast as four of us sat discussing the play and putting the world to rights. We then realised that we had agreed to meet some other Burketeer friends at Shakespeare's Globe. We hadn't checked out of the hotel and it was at least a half hour walk to meet them, and we had about ten minutes to get everything done.  No problem we rearranged to meet them a little later. We decided that as we had now walked breakfast off it would seem polite to sit and have a drink and ponder about what to have to for lunch. As we walked into the courtyard we saw another Burketeer out with her daughter... "cooooooeeeeeee" we all yelled and waved at her. (No, it seems you can't take us anywhere!)

We ordered a Pimms and as it was the only alcohol to pass our lips that weekend, it went to our heads rather quickly. We sat and talked and laughed, and Janet...oh we will have to put you on Pimms again...your comments were priceless. I haven't laughed to the point of being in that much agony for ages... "It's when you suck up something in your straw that you're not expecting!" (I had a vision of Tom popping out of the straw saying hello!) It was just one classic line after another. Once we had laughed ourselves silly and finished lunch we went for a little amble around the Globe's shop. A couple of purchases later, and we wondered what we should do next...well all this sitting around chatting is hard work, so we headed downstairs to the cafe for a cuppa and some cake! Then it was time for me to say my goodbyes and head off for my train home. The post Burke blues hit on the tube train to Euston, but I realised it wasn't Tom I was missing, it was my fabulously funny Burketeers!