Strike – The Cuckoo’s Calling (Episode One)

August 12, 2017
BBC1’s new detective drama, Strike, premiered at the BFI on London’s Southbank on Thursday night. There was a screening of the first episode, followed by a Q&A session with the stars of the show, Tom Burke and Holliday Grainger, as well as executive producer Ruth Kenley-Letts, director Michael Keillor and writer Ben Richards. 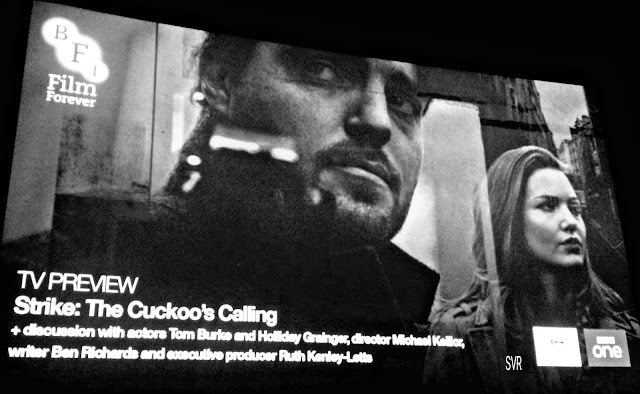 The Cuckoo’s Calling is the first of three detective novels featuring Cormoran Strike and his partner Robin Ellacott, written by J K Rowling under the pseudonym Robert Galbraith. Fans of this detective duo have eagerly being waiting to see their heroes brought to life on screen and so I was interested to see their reactions on Thursday night. Twitter feeds and social media had been rife with many querying whether Tom Burke could take on the enormity of the role of Strike. In the book Strike is 6’2, overweight, not particularly attractive, and with “pube-like” hair. That is NOT a description of Tom! It is difficult for me to be objective on this point. I didn’t read the books until after I had been told that this was going to be Tom’s next role. I immediately visualised him as Strike – although I did pray the producers would see sense and not give him a Kevin Keegan perm. (Tom did say in the Q&A he had offered to have a perm, thank goodness that offer was turned down!)

Tom Burke is a phenomenally talented actor. If you watch the depth of his back catalogue you’ll see that he’s taken on an enormous variety of characters, and that he has the calibre to make every role his own. If you want someone kind hearted, thoughtful and gentle there is Davy in Third Star; for a hardened football thug, there is Bullet in The Hooligan Factory; and so it was no surprise to me that he could become the Cornish giant that is Cormoran Strike. Tom’s acting skills, a bit of padding and some clever camera work have brought this screen character to life.

Strike is a war veteran turned private detective who has been wounded both physically, losing part of his leg in Afghanistan, and psychologically. He lives and operates out of his tiny office in London’s Denmark Street and draws on his previous experience as an SIB Investigator to solve complex cases which have eluded the police. This gives scope for a dark detective series, but this adaptation has taken a fresh approach to the detective genre rather than falling into the popular Nordic Noir trap. The filming is very real, with a lot taking place on location, including beautiful wide angle shots of Strike roaming the busy streets of London. Cinematically, Bronte Film and TV and the BBC have produced some stunning visuals, and with a powerful music score in addition, they have generated a haunting and authentic feel to the show. 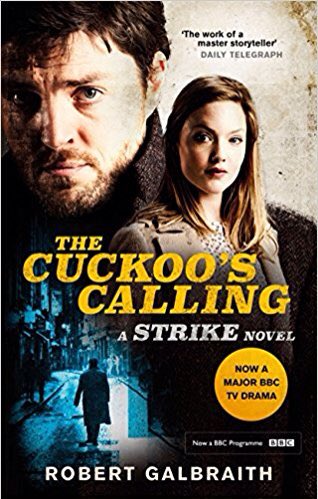 Diehard fans need to approach the series as an adaptation of the books and expect some changes to the original novels. Locations have altered, some main characters have been lost, and scenes have been rewritten to condense and sharpen the storyline, but fear not, the show still retains the soul of the original books. Most of this soul comes from Tom Burke and Holliday Grainger, who are perfectly cast as the two main characters, Strike and Robin. Their on screen partnership is so believable it has you entranced from the very beginning and Ben Richards has created a script with a subtle humour that you don’t get in the books; this gives an added dimension and warmth to both Strike and Robin’s characters. My favourite moments from the preview were Strike’s expression upon watching an American rap star, and the tricky problem of going to the toilet the minute you have just removed your prosthetic leg (which in addition he talks to!)

Holliday Grainger has captured both the look and attitude of Robin from her first moments on screen. Robin is an office temp, and her first moments heading to Strike’s office are action packed to say the least. Her gung-ho attitude to the job in hand is met with admiration by Strike, and to the audience in general. There is an honesty about Robin in the books and her confusion, ethics and desire to do well for her new boss is captured so expressively by Holliday that there is no need for words.

The Cuckoo’s Calling revolves around the death of a model, Lula Landry. The opening sequences show her posing for paparazzi shots at a party, and making her way home as swirls of snowflakes flutter around her. As her body lies in the snow below her luxury penthouse apartment, the question is posed, did she commit suicide or was she murdered? But who gets changed before they kill themselves ponders Robin? This leaves the door open for the secrets of Lula’s family to open up and for those who haven’t read the books to wonder whodunnit?

As a Tom Burke fan, I’m always hoping that his work will be well received; therefore it was joy to sit next to a gentleman who wasn’t a fan, and to hear him laughing loudly throughout the show. He and I collectively let out a sigh of disappointment that the final credits had come far too soon. It didn’t feel like we had sat through an hour long episode.  At the Q&A session, Ruth Kenley-Letts joked that it wouldn’t be good for her career if the show was a turkey. I believe she doesn’t need to worry; the BBC has a new hit on their hands, this is a memorable detective duo that will impress fans and non-fans of the books alike. 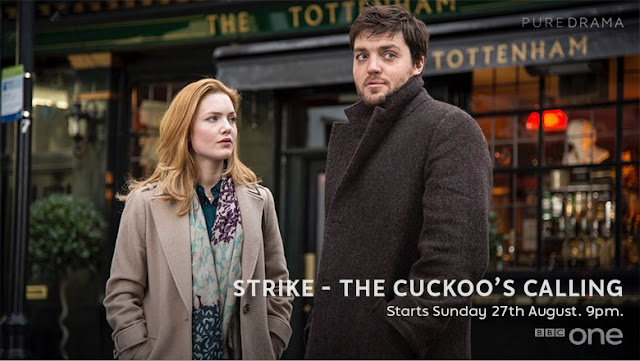