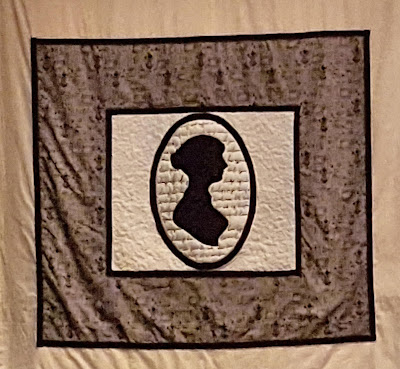 It isn’t often that I head into the dark unknown world of theatre. Usually I will have read a copy of the play beforehand, or at least seen or heard of the playwrights work. Not this time. This was unchartered territory, but I was assured it would be a thoroughly enjoyable evening with plenty of laughs.

From the very start of the play, it immediately becomes obvious that Maggie Fox and Sue Ryding have a great passion and knowledge of English Literature. They have been writing and performing together since 1985 putting their unique brand of humour on the UK and international stage. Looking through their past hits which include The Picture of Doreen Gray; Inspector Norse and Withering Looks, you know you are going to spend the evening being purely entertained; it isn’t going to be a night where you walk out of the theatre feeling drained or needing to dismantle a complex plot.

The Guardian has called LipService Theatre Company “the Laurel and Hardy of literary deconstruction” and it is easy to see why. We are immersed into the world of domestic women writers, who are trying to juggle life and writing, in between nursing the baby and entertaining visitors.

Jane Austin has started writing Pride and Prejudice, she has crafted the haughty character of Mr Darcy, but poor ole boring Bingham is just being sketched out…literally! Sue appears on stage with a biro drawing of a body pinned to her front…the character of Bingham needs padding out a bit! Jane gets called away to answer the door, leaving Darcy to contemplate why Austin won’t write him the lake scene, so infamous with those who watched the BBC production starring Colin Firth. Clearly unhappy with how his story is panning out, he starts to write a new tale about himself, taking on board other famous female writers. He wanders off and finds himself in Daphne du Maurier’s Rebecca and being mistaken for Maxim De Winter – Darcy is proud of this mistaken identity, even though he doesn’t have a clue what is going on, and this leads to some rather silly shenanigans and some of the biggest laughs of the evening. 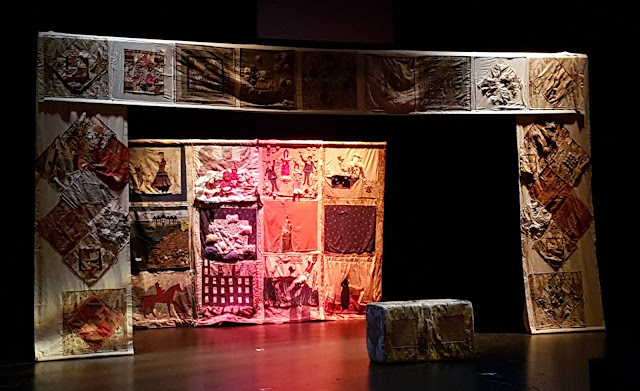 The stage is adorned with quilts (showing the domestic side of the female life, she was expected to sew and read, not write novels!) and these quilts create moving screens in which our duo can carry out swift scene changes; they also allow for live stage action to mix with filmed interactive scenes. In one particularly clever scene, Darcy and Elizabeth Bennet are at a ball dancing – a film is shown in which the actors are seen on screen, and then they disappear from view at either side only to re-emerge on the stage. It was timed to perfection and added an interesting element to the viewing experience.

Maggie had an unfortunately timed nosebleed within minutes of the show starting, however, her ability to adlib was second to none, and perhaps was one of the funniest parts of the evening. This was a signed performance, a screen at the top of the stage showed the text, whilst a lady did live signing at the side of the stage. The subtitles stopped whilst Maggie disappeared to stem the flow of blood, but she kept on with a running commentary. As she pointed out, some audience members who could keep up with the signing would know what was going on, the rest would just see the “stuck” subtitles. 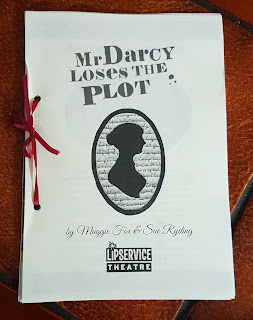 After the interval, there was a funny sketch showing the problems of saving your literary endeavours to “The Cloud.” It was spot on, I think everyone is aware of that slow uploading speed and the adverts for buying more storage space to "make your life better." However, this is where the production began to falter slightly. Darcy soon gets mixed up in the writings of Beatrix Potter and Elizabeth Gaskill and it’s here where the jokes begin to feel a bit staged, not flowing as well as they did in the first half.

It was a thoroughly entertaining evening and it is easy to see why Maggie and Sue have gained a cult following. They have warm and engaging personalities that show case their ability to take the great classic novel and turn it on its head.

Mr Darcy Loses the Plot is on tour throughout September, October and November. Check out their website to see if it’s coming to a theatre near you.