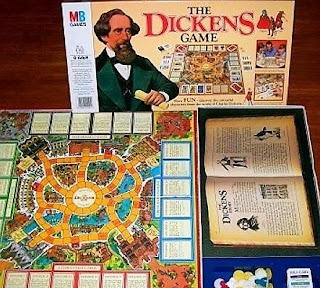 As a child one of my favourite board games was “The Dickens Game.” I hadn’t read anything by
Dicken’s at the time, but I soon learnt about him with this game. Players moved from inn to inn collecting characters to complete 6 chapters of one of Dicken’s novels (Oliver Twist, A Christmas Carol, David Copperfield or Great Expectations.) No-one I knew enjoyed playing it and so I spent most of my childhood making the cat and two teddy bears pit their wits against me. I always collected the cards for Great Expectations and they never argued with me!


"So, I called myself Pip, and came to be called Pip.”

The tale of Great Expectations commences Christmas Eve 1803. The young orphan Pip is visiting the graves of his parents. Here he meets with the criminal Abel Magwitch who he agrees to help. This meeting will have a profound effect on the rest of Pip’s life.

A year after the meeting, Pip is invited to Satis House, the home of the wealthy spinster Miss Havisham. Locked in a time warp, she plays games with Pip. It is here where he encounters the beautiful Estella and whilst he falls in love with her, she treats him unkindly, teasing him, making him fall under her spell more and more. After several years, Estella is sent away and Miss Havisham puts a stop to Pips visits. She has finished toying with him, as a cat would toy with a mouse.

Pip becomes the blacksmiths apprentice, but after four years into his service, he is visited by a London lawyer named Jaggers; Pip is to go to London to become a gentleman of good fortune, but just who is his mysterious benefactor?

The BBC did a fabulous adaptation of Great Expectations in 2011 with Gillian Anderson as Miss Havisham, David Suchet as Jaggers and Tom Burke as the villain of the piece…the dastardly Bentley Drummle!

It was a wonderful TV production, but whilst it had an extraordinary cast, it also benefitted from filming in numerous locations to add weight to Dickens’ great tome. Could a lengthy, well-known book and TV adaptation, do well on stage, or would it be butchered beyond repair? 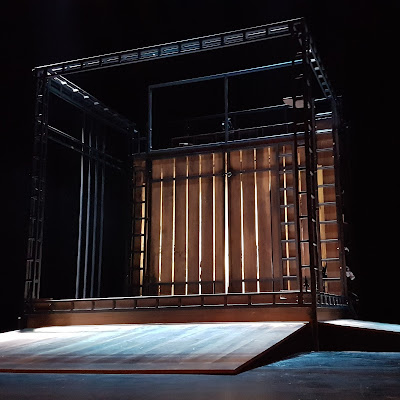 The creative team should be justifiably proud of themselves, especially James Turner’s clever story box set. Whilst at first glance the box on the stage looks very simple, it does make you feel (with the use of a little imagination) that you are visiting the locations from the book.

At its smallest it shows the tightly-knit space of Joe’s forge, and being cast in metal it linked in with the idea of Pip’s apprenticeship. Extending the metal sides echoes the spacious houses and offices of London; but most impressively, opening of the wooden doors at the back reveal the decaying fairy-tale interior of Satis house, complete with ragged curtains and uneaten wedding cake.

I also loved the integral cupboard of sound effects; it was like a “reveal” into the world of the radio play, and the inbuilt climbing frame which allowed the actors more movement about the stage.

Nichola McAuliffe (Surgical Spirit, Cheri) inhabits Miss Havisham with echoes of Gillian Anderson’s portrayal about her. Jilted on her marriage day, humiliated and feeling betrayed she suffered a mental breakdown and never left Satis House again. She wore her wedding dress for the rest of her life and eventually ordered her lawyer, Jaggers, to adopt a girl for her. 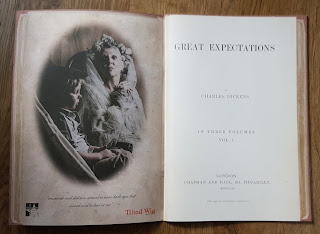 She wanted to prevent Estella from suffering at the hands of a man as she had once suffered but things changed, Miss Havisham became set upon revenge. Rather than being a mad eccentric, she was devious, plotting and used Estella to break young men’s hearts. Pip becomes the victim of her callous scheming, and it is only seeing the result of her work that she realises revenge achieves nothing. Nichola McAuliffe’s demeanour encompasses all these nuances of Miss Havisham’s character as we journey with her from protector, to revenge seeker, to repentance. At times it is quite terrifying seeing how easily she grooms and manipulates each of the children.

Sean Aydon as Pip is believable as he grows seamlessly from the young Pip to the London bound gentleman. His scenes with Edward Ferrow as Joe Gargery are amongst some of the most emotive in the show and offer a tenderness that counters that of Miss Haversham’s callousness. 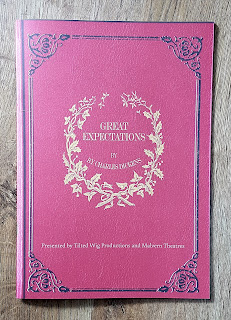 This is a faithful but innovative production of Dicken’s classic, and being true to the novel requires a multitude of characters. Six actors take on the roles of approximately 24 characters plus ensemble, switching accents, costumes and demeanour at break-neck speed. All should be highly commended for being able to switch persona so quickly, however, there is only one person who can ever bring the full range of Bentley Drummle’s dislikeable character to life (Tom Burke) but Daniel Goode did give him a good run for his money!

Great Expectations is a Tilted Wig and Malvern Theatres production. It is currently touring nationwide until 23rd June 2018. https://www.tiltedwigproductions.com/productions