"What were you in life?" - Allelujah! London Bridge Theatre 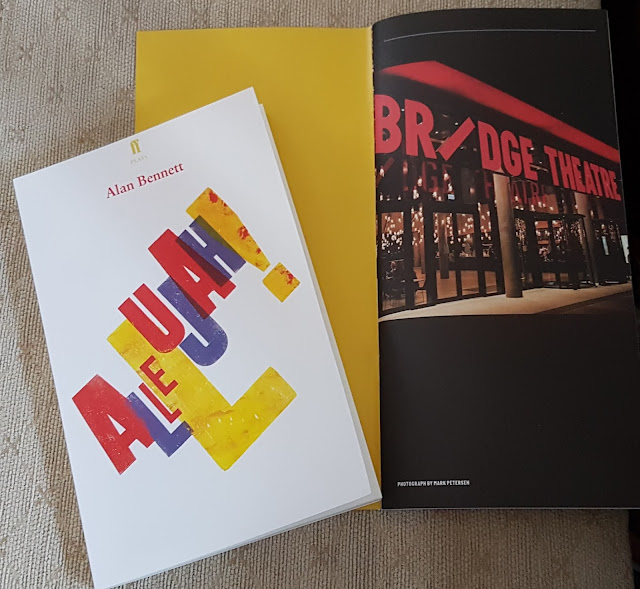 On paper, Allelujah didn’t sound that promising. Set in a old style Yorkshire hospital, The Bethlehem, which is facing closure, it tells the story about a group of patients on a geriatric ward. It was typical Alan Bennett. Strong, straight talking Yorkshire dialogue about various political issues past and present. The afternoon could have been a preachy and tedious couple of hours, however this was a light-hearted piece about serious issues and I’m pleased I went to watch it.

Alan Bennett is something of a national treasure. Now in his 84th year, he still has that ability to make you think about the days of "good ole England" when life was simpler, and people had time for one another. And what better place to show that lack of empathy the nation has with people, especially the older generations, than a geriatric ward on a hospital.

Capitalism has taken its toll and paved the way for a less caring society. Often we mean well, we intend to see people, to contact them more, but those good intentions are lost through working long hours, commuting further to earn the money to buy the nice things advertisers tell us we need. If we don't have the latest technology we're scared of being left behind; scared of what others may think of us. Bennett takes us back to the conversations we had as children with our grandparents, when we had the time to sit and listen to them reminisce about their pasts. Pasts which they held dear, memories that they wished to share so they wouldn't die with the person; a reminder for other generations to learn about their individual histories.

Colin works for the health ministry, a management consultant who wants to assist refresh the ailing health industry. The old-fashioned idea of a local cradle-to-grave hospital is no longer sustainable and despite the endeavours of the staff making it a fully functioning cost-effective business. In the eyes of the ministry a well-run business is just one more reason why the hospital needs to close. "The state should not be seen to work." But the Bethlehem is not going to go quietly, the Chairman of the hospital trust has seen to that by inviting a camera crew to make a documentary about the place and its patients! 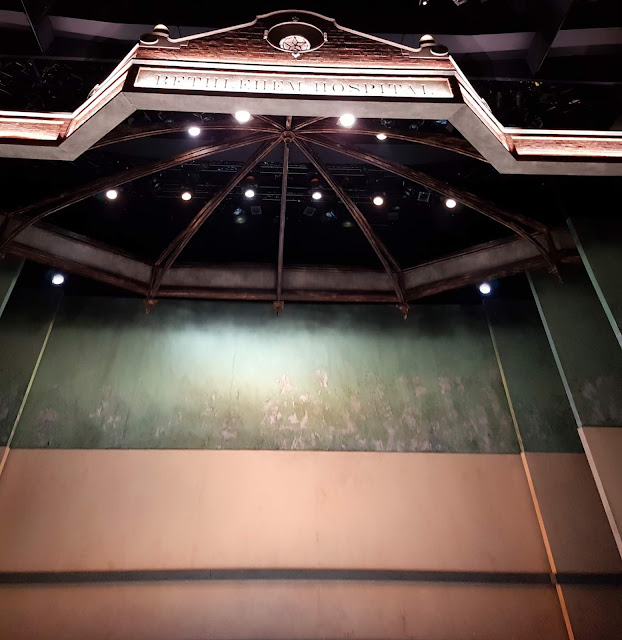 The hospital is a cheery place, the patients are encouraged to join the choir "those with dementia can sometimes sing even when they cannot talk." And so from the start we are transported to an upbeat world of song and dance to keep everyone's spirits up, somewhat reminiscent of the stories of communities singing to Vera Lynn to keep their spirits up during the war. But amidst all this gaiety, serious issues arise.

Sister Gilchrist, played so heart-warmingly by Deborah Findley, is up for an award.  An "old school nursing mentality, you don't mess with her, but her hearts in the right place. She cares. She cares about her patients and she cares about her ward. "The first priority is to keep them clean. And I don't mean clean as masked by air freshener...Pine Fragrance, Forest Glade...because you know that underneath there is the smell of urine." "I like my wards to smell of fresh air or smell of nothing at all." So it makes the closing scene of Act One even more poignant as the play breaks questioning her efficiency.

It's a large cast of 25, and there are some fantastic performances throughout. Samuel Barnett as the aforementioned Colin, shines as he cycles onto stage fully kitted out in lycra. It turns out he hasn't arrived at the hospital for work reasons, he has returned home to see his dad who is a patient at The Bethlehem. But it speaks volumes that this young, time deprived man, chose to cycle 198 miles from London to Yorkshire rather than nipping up on the train, the reluctant visitor as echoed by Charles Causley's poem which is alluded to in the play.

Sacha Dhawan is also impressive as Dr Valentine, the amenable doctor who takes great of his patients, but despite this, he entered the UK on a student visa and his position has become precarious. Will this illegal immigrant be able to fight to stay in the country he now classes as home and one which he pays his taxes to?

Bennett's writing has echoes of Rattigan's Separate Tables in the character of Ambrose, the scholarly teacher waiting patiently for the visit from a former student that is unlikely to ever happen. Simon Williams stands out playing this sharp witted, educated man who still enjoys reciting poetry and helping Dr Valentine learn about the UK, but he is subjected to the daily unwanted attention of Hazel...

Hazel "I was singing it for you."
Ambrose "I wouldn't bother."
Hazel "You wouldn't say that if I was Dorothy Squires."
Ambrose "On the contrary, I would say it if you were Kiri-Te-Fucking-Kanawa."

Arlene Phillips choreographed some great ensemble routines and the choice of music made you want to sing along in the aisles as this great bunch of actors showed there are no limits to old age, and a reminder of happier days.

Allelujah runs at The Bridge Theatre until 29th September 2018.