Apparently, I’ve been languishing. Organisational psychologist Adam Grant, PhD, wrote in a recent article in the New York Times, that languishing is "a sense of stagnation and emptiness." Whilst in this state, you may not see the point of things; simple pleasures lose all meaning, you lack any sense of purpose, basically you are feeling a bit "meh."

I can attest to that. A global pandemic sort of does that to you. What’s the point of booking a holiday when you know the chances of it being cancelled are so high? Last year I ended up taking my summer holiday in December. Why organise meeting friends when the border between England and Wales keeps opening and closing with more regularity than Tower Bridge? My second “home” at Theatr Clwyd was closed, along with theatres up and down the UK, so there was nothing to get excited about – let alone blog about. Happily, things are now starting to change, and there is a light at the end of the tunnel.

In the heart of a European city, the lights change at a major crossroads. A car grinds to a halt. Its driver, without warning, has gone blind. Within hours, it becomes obvious that this blindness has started to spread throughout the city. The government tries to contain what has become an epidemic by quarantining those infected in a disused asylum. In a panic driven city, are these measures enough, or will they contribute to something more sinister? 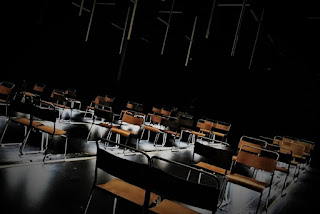 It feels so strange to finally be walking back through the theatre doors. Even stranger, after sanitising my hands and giving my contact details, I’m told to sit down in the bar and someone will come for me. I’m then called forward and asked to accompany a member of staff through the door reserved for actors/staff. I walk onto a very dark stage. I’m told there will only be three ticket holders for this performance, but that a member of staff will sit with us for the duration of the performance. I’m shown to my seat and told to put on the headphones that are laid out for me. I’m also told there is a torch beneath my seat should I feel the need to use it to make my escape…but if I leave, I won’t be allowed to return.

I’m starting to feel a little anxious, a little unnerved as to what to expect.

Based on the 1995 novel by the Portuguese author José Saramago, Blindness is the gripping story of the rise and fall of an unimaginable global pandemic. I know what you’re probably thinking dear reader, why “watch” a play about a global pandemic when we’re currently already living through one. The only answer I can give you is that I’ve read a number of books about plagues throughout lockdown and the reactions of the people and governments fascinated me.

I used the term “watch” because there are no actors on stage to observe. Blackness surrounds you. The stage is a stark set of spaced-out wooden chairs which adds to the feeling of isolation, and fluorescent lights hang vertically and horizontally from the ceiling.

The story is played out through the headset, voiced by Juliet Stevenson playing the role of both narrator and Dr’s wife. Throughout the play the lights change colour as the story progresses…until suddenly, there is total blackout.

During lockdown I watched The Encounter by Complicite (Barbican Theatre – digital) on my laptop, it was one-man retelling another man's story and you felt as though you were with him as he trekked through the jungle; but because I was in the sanctity of my own home it lost some of the intensity it would have held in a live theatre environment. Even having watched that performance, it didn’t prepare me for how engrossed I would be, sitting on a stage, listening to a play through headphones. As I was emersed into darkness, it felt as though Juliet Stevenson was whispering directly into my left ear. I physically flinched and the hairs on the back of my neck stood on end, and at one point, I even tucked my outstretched legs underneath my chair so she wouldn’t fall over them as she brushed past me!

It was an extraordinary experience. It wasn’t like listening to an audio book, the immersive binaural sound design by Ben and Max Ringham submerged you straight into the heart of this dystopian landscape. Like many Saramago novels, the characters are not given names, instead they are referred to as "the doctor's wife", "the car thief", "the first blind man or "the girl with the dark glasses". This, along with the unidentified place or country in which the pandemic occurs, increases the timelessness and universal appeal of the play, making it a “must-see” production if the opportunity arises.

From May – July 2021, Blindness will tour to seven venues across the UK: