For people of a certain vintage, they’d come home from school, be handed a glass of Kia-Ora and sit and watch Take Hart with the aroma of fish fingers, chips and beans wafting in the air. For the uninitiated, Take Hart was a BBC children’s TV programme about art, presented by a chap call Tony Hart, who had a Plasticine animated side-kick called Morph. Unlike progressive UK Governments, Tony could see the benefit of encouraging children to be creative. He would demonstrate small-scale projects you could easily try to recreate or adapt, and large-scale projects on the studio floor, or a beach which you’d just watch in amazement. There was a special part of the show “The Gallery” in which young viewers could send in their own artwork and if they were lucky, Tony would select their work and it would be shown on the TV. 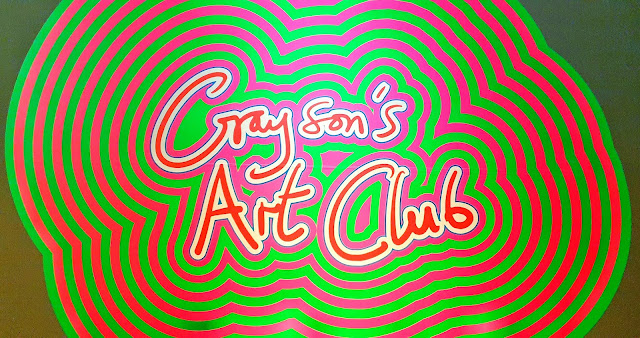 The reason for my trip down memory lane is that during lockdown, Grayson Perry, one of Britain’s leading artists, took this idea one step further. No longer just the domain of young children, Grayson and his wife opened the doors of the artworld for everyone; no matter their age, or their ability, everyone was welcome at Art Club. The Channel 4 show was only 6 episodes long, but it quickly brought the British nation together during the first lockdown.

“We want to encourage everyone to express their creativity through art. Art is good for you, whoever you are.”

Each week, Grayson and Philippa would set a creative theme and people would submit their artwork to them. Alongside the artwork submitted by the public, celebratory guests contributed their artwork, and of course Philippa and Grayson shared their creativity with us too. 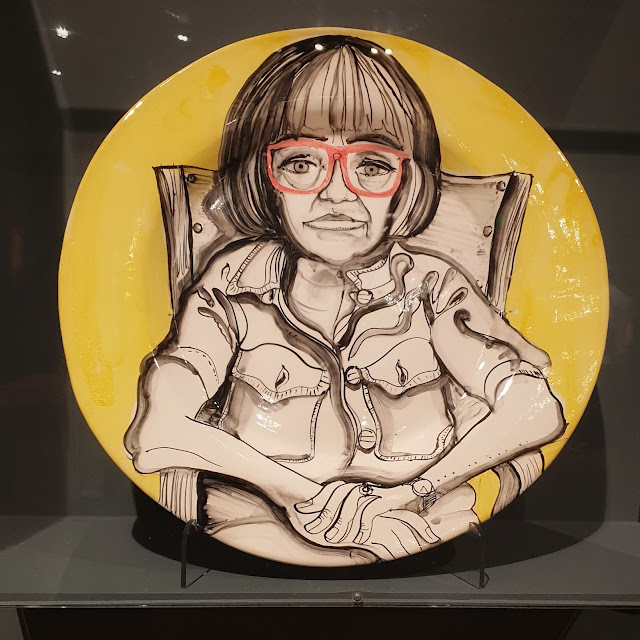 Nearly ten thousand people submitted their work to Grayson and Philippa, and art chosen by them, and their celebratory guests, was shared on national television and more latterly in an exhibition at Manchester Art Gallery. Grayson was adamant that the exhibition would not be shown in London. In his own words, he loves London, it’s the centre of the British art world, but Art Club wasn’t for the art world, it was for the whole country.

Lockdown Two thwarted Grayson’s plans for opening the exhibition, however, it did allow us a second series of Art Club and offered six new themes for the nation to unleash their creativity. Family, nature, food, dreams, work and travel were the hot topics of series two and once again the country united to explore and share its artwork once more with Grayson, Philippa and Kevin the cat. The divided UK was again united, showing that making art unites us and comforts us in our times of need. Whether it’s going back to childhood with some Lego or grabbing a pencil and paper and scribbling away our unconscious thoughts or fears, art is the therapy that heled many people come to terms with being forced to stay at home. 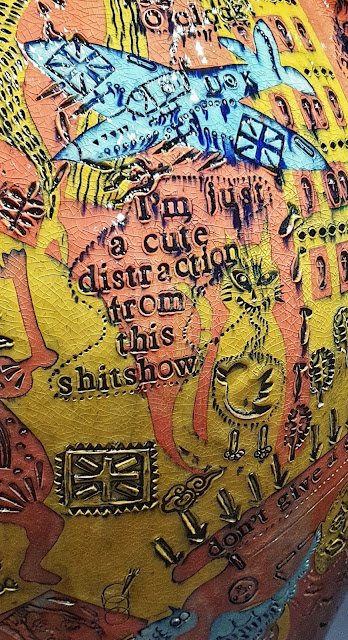 Now the lockdowns have ended, Manchester Art Gallery is open, and the public can reminisce about those early, dark days of lockdown. The exhibition is an incredible reminder of what we, as a nation went through. It chronicles how we got through the changing mood of the pandemic, from one of fear, to one of anger, to one of unity and tolerance.

Below are my personal favourites from the exhibition catagories: 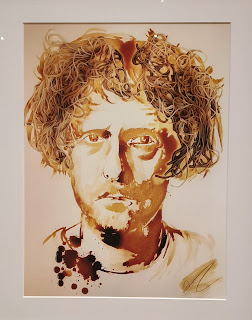 When I visit a gallery, I’m not immediately drawn to the portrait section. (Strange when you consider that for the last few years, I returned to drawing by doing portraits of my favourite actor Tom Burke.) I was pleasantly surprised by how many of the portraits spoke to me and there were a few pieces that really caught my attention, but I loved the simplicity of Nathan’s work; how by raiding a few condiments from the kitchen cupboard, he could produce a portrait of Grayson using soya sauce and noodles! 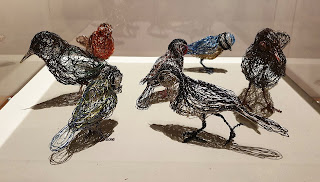 My favourite artist is Georges Stubbs; the way he captures the details of his animals, especially the horses he is famed for is sublime. I was captivated by several animal paintings in this exhibit, but it was these garden birds made of wire that stole this section. The attention to detail in these tiny sculptures brought home the joy these daily garden visitors gave me and watching them have the freedom to go wherever they wanted whilst I was being told I had to stay at home! 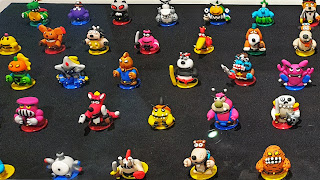 There was something so endearing about Alex’s fantasy Fimo clay models. They took me back to a time when it was acceptable to lose yourself in a world of make believe. Each character is unique, but all exhibit Alex’s personal style. Best of all, they made me smile, and what could be better than disappearing from the harshness of reality, to take time out and allow yourself to take in the joyfulness of these little characters.

View From My Window 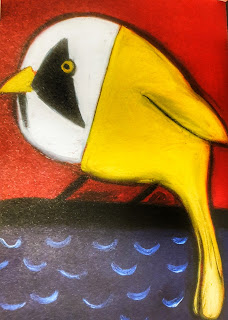 I didn’t feel much connection with this category. I didn’t spend much time looking out of the window during lockdown, but if I did, it was watching the birds on the feeders. It’s like watching a soap opera being played out, the different birds playing their roles to aplomb. I really loved how Jim had stripped our feathered friends back to their most simplistic form and used bold primary colours – a bit of brightness and cheer in the dark days that stretched ahead of us. 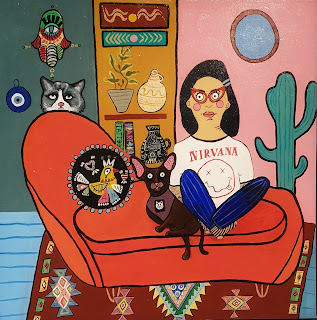 At home with my cats 2020 by Ania Newland

Ania’s painting stood out for me as it had an echo of a Mr Man book to it. I don’t make that comment flippantly or disrespectfully – it is the bright colours outlined in black that made the thought pop into my head. And what could be a more homely thought than being a child tucked up in bed having Mr Men books read to them? There was also a hint of longing to be the person sitting on the sofa surrounded by cats. When lockdown began, the only animals I had keeping me sane were the yard cats at work. Things are different now, and heaven forbid, if there’s another lockdown, I have a cat to share my sofa with! 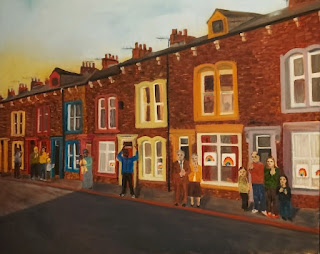 This image was a stark reminder of lockdown. I think we’ve easily forgotten how bad the early days were, when you could only leave your house to go on a walk (on your own.) The car sat on the driveway unless you were going to work or the supermarket. There was a feeling of being trapped, your home suddenly became your prison; children stuck inside trying to find a way through the school day when formal schooling was no longer an option. And then, without warning, neighbourhoods were showing signs of solidarity – windows were being bestowed with children’s paintings of rainbows. This wasn’t a new concept, it had started in Italy, one of the first European countries to be hit hard by Covid. In Italy the art was accompanied by the phrase ‘Andrà Tutto Bene’, or All Will Be Well. The rainbow was a simple way for children to show their appreciation for the NHS – and on a Thursday evening at 8pm, residents up and down the country joined together and clapped for their overstretched NHS. If there is one piece of art in the whole exhibition which has a historical context to it, it’s this one. In ten years’ time, if we look at it again, those memories of lockdown will come flooding back. 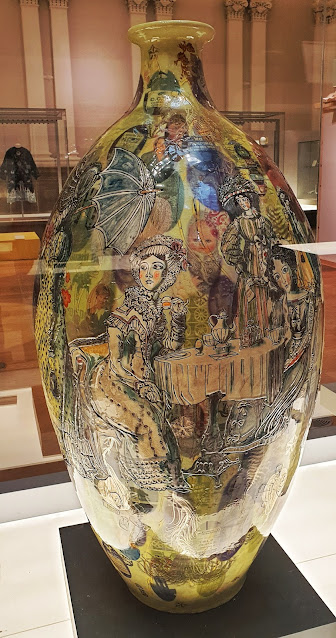