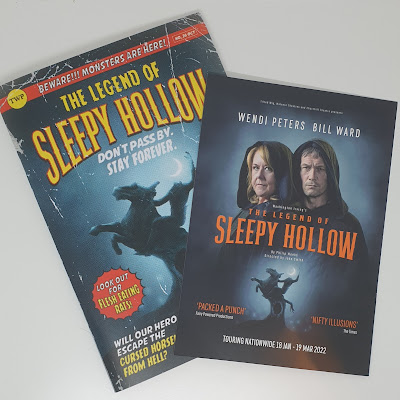 I love, love, love the comic book effect programme for The Legend of Sleepy Hollow, but that’s pretty much where my love for this production began to run out.

“Don’t pass by. Stay forever.” Beseeches the sign outside of Sleepy Hollow, but this is not a place you are likely to linger. The show is loosely adapted from Washington Irving’s short story, and unlike Tim Burton’s film starring Johnny Depp, it remains true to the original in that it follows the arrival of schoolmaster Ichabod Crane (Sam Jackson) to the superstitious hamlet of Sleepy Hollow.

The Headless Horseman represents a past that never dies, but always haunts the living.

Journalist and biographer Washington Irving, born in 1783, created arguably the earliest of the American-made horror creatures…The Headless Horseman. Ichabod Crane, a young man from the city of Boston, arrives in the backwater of Sleepy Hollow to open a school, but in reality he has a darker motive for coming to this small hamlet. Irving was obsessed with early American history, the folklore surrounding the Headless Horseman maintained that the Horseman was a Hessian trooper during the American Revoltunary War and killed during the battle of White Plains in 1776. The legend stated that he lost his head by an American cannonball, and whilst his body was collected, his shattered head remained on the battlefield. He was buried in the cemetery at Sleepy Hollow from where he was said to rise as a malevolent ghost, seeking his head, or a replacement from someone else.

Having watched, and enjoyed, the film, I really struggled with this version of the story. Writer Philip Meeks has adapted the original short tale into a long, rambling tale that doesn’t quite add up. Every person in Sleepy Hollow harbours a deep, dark secret, including newcomer Ichabod. This makes for an incoherent messy plot, which is exacerbated by not being able to hear what is being said. Now it is very rare for me to go to Theatr Clwyd and not sit in either the front row, or the row behind, so even if the sound engineer has messed up, I can hear what is being said, but apart from Wendi Peters (Widow Mariette Papenfuss) the dialogue was garbled, shouted rather than projected, and the accents were all over the place.

The play started off well, it was atmospheric and built up a level of tension that you would expect from gothic horror, but that quickly went downhill. I started to wonder if the programme was an indication that this was jibe towards the genre. The play lasted approximately two and a half hours and for a horror story it was very tame and not at all scary. The only shivers I had down my spine were from the lack of heating in the theatre. Lots of dry ice tried to create a haunting and chilly atmosphere, but it quickly became an overused prop losing its intensity. Equally the short scenes filled with strange song and dance routines which were there to remind us we were in Sleepy Hollow, a scary place filled with superstition and ritual, just felt out of place. 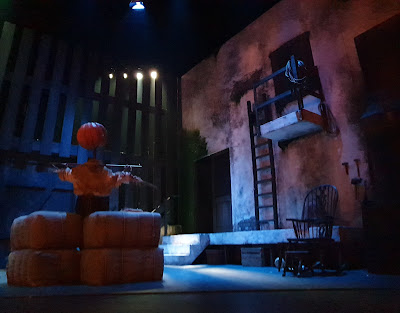 Not everything was bad though, there were some really good illusions, such as a mysterious character switch which drew gasps of awe from the audience, and Wendi Peters diving headfirst into the cellar had the audience clapping and whooping, but most of the play left me and many audience members baffled. In fact, the chap next to me was so confused by it all he decided he’d had enough and left at the interval never to return.


With careful editing, this could be a great production. The first half hour could be removed as most of what goes on adds little to the eventual tale. The storyline is far too complicated trying to weave together the story of the headless horseman with another American legend – that of the Wendigo, a creature that can be summoned by mentioning its name. Then there is the story of sexual identity acceptance…just because that message is going on in the world, it doesn’t have to be shoehorned into every stage play. Thirdly there is the exploration of man versus magic or conspiracy theories. Structure the storyline, remove the meaningless dancing, concentrate on a clearer dialogue without actors turning their backs to the audience and create a sense of foreboding through the script rather than gimmicks. These tweaks would transform this production into something well worth watching as opposed to the muddled stream of thoughts I have just watched.

Washington Irving’s - The Legend of Sleepy Hollow by Phillip Meeks