It was called Jumpy, and starred Sara Stewart (Sugar Rush, Ashes to Ashes) as 50 year old Hilary. She is stuck in a rut, she is fearful of losing her job, she is having difficulties with her teenage daughter, her marriage is one of habit, and she feels that life is passing her by.

Whilst the premise of the play sounds rather dreary, it is actually a hilarious play, peppered with poignant moments that most of the audience would be able to relate to at some point or other in their life. Sometimes you are laughing in sympathy with the characters, other times you are holding your sides crying with the absurdity of it all! 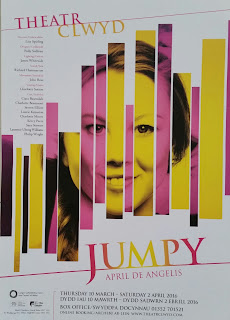 The play is mainly set in the London home of Hilary, and the set is a simple one of stepped tiers for the cast to step in and out of shot as their roles require. Scenes changes are carried out by swift moving cast members as they provide costume and prop changes under the cover of dimmed lights and loud music.

Hilary, whilst despondent about how her life has turned, is eager that her daughter Tilly gets the best in life. Tilly (Charlotte Beaumont - Broadchurch, Waterloo Road) has other ideas. She is keen to drive her mother mad, having sex at 15, becoming pregnant, staying out all night at parties, the typical horrendous teenager!

To cut through the teenage angst, we a treated to a dazzling display by Kerry Peers (The Bill, Waterloo Road)  who plays 50 year old Frances, Hilary's friend, a woman desperate to keep up with the likes of Kim Catterell in looks and sexuality, and thinks the answer to everything starts with a glass of wine. The audience is rendered speechless by a hilarious burlesque type routine, complete with balloons and whip! If this isn't funny enough, she then tries to convince Hilary to become a lap dancer too, complete with maids outfit and feather duster!

The play was performed in a lovely intimate setting and the short sharp scenes, mixed the problems we have as we go through life from the eyes of a teenager and the eyes of the older generation. At times poignant, at times hysterical, it truly was a joy to watch.