Three Strikes and You're Out! (Box Clever Challenge - September)

September 27, 2016
I know this is going to seem a strange choice as a classic read, but I’m sure when Agatha Christie wrote her crime novels they weren’t seen as classics at the time either.

When I heard that Tom Burke would be portraying the role of Cormoran Strike in the BBC’s dramatization of the Robert Galbraith novels my heart sank. Robert Galbraith is the pseudonym of J K Rowling.  I remember years ago trying to “get into” the Harry Potter novels. I managed 3 and a half books before giving up. I did not like her style of writing and I did not care for any of her characters. They lacked substance; her imagination was good, but the delivery was lacking. I had grown up reading Alan Garner, C S Lewis and Susan Cooper, these were authors who could transport you and make you care about characters; there was a plot and a straightforward narrative.  I told Tom I would watch him and support him in the role of Cormoran Strike, but I wouldn’t be reading the books. He didn’t seem too perturbed about my comments, maybe he didn’t care, maybe he knew me better than I knew myself and he knew I’d give in. Maybe he even knew if I gave them a chance I might like them. Only he knows. (But if that is what he thought…then he was right!)

I managed 4 days from my big announcement to Tom. I was in work and had to take part in a 2 hour webinar…it seemed rather dull…I downloaded The Cuckoo’s Calling onto my phone (that’s another first…I hate Kindle but I thought the book would be that bad I wouldn’t sully my bookcase with it, I’d just download it.) I had lots to do over the next 10 days, work, maintaining a home, a papier mache cat to finish to post to London and a full M’lady de Winter dress to sew…I didn’t have any spare time for reading…yet by the Friday I saw Tom I only had 20% of the third book to finish. I confessed he was right, I was wrong, and by the time I saw him on the Saturday I had bought the paperbacks and was able to hand him the third book and say “I finished this one at 6am…please will you sign it?!” He did, bless him, and I love the message he wrote!

So September classic reading is the first three Cormoran Strike novels, The Cuckoo’s Calling, The Silkworm and Career of Evil.

You should have come to the cuckoo’s calling…

The first novel introduces us to the private detective, Cormoran Strike, a war veteran who lost his leg in Afghanistan. Cormoran not only has the physical wounds of war to deal with, but the psychological issues too.  He has just finished a long and tumultuous relationship with his girlfriend, he has substantial debts that need paying off; he has resorted to living in his office and is now down to his last client.  Then John Bristow walks through his door, and Cormoron’s life is about to change.  John’s sister, the beautiful model Lula Landry had fallen to her death from a balcony months earlier. The police ruled it a suicide, but John knows differently.  He wants Strike to investigate the glamorous world of modelling, rock stars and designers, to find out did Lula fall, or was she pushed? 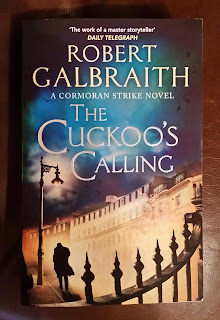 I was pleasantly surprised reading this novel and how absorbed I was with the two main characters, Cormoran, and his new assistant Robin. It seems an unlikely pairing, however, the two characters bounce off one another and I instantly fell in love with them both; although I didn’t fall in love with Galbraith’s writing.  I enjoy the author giving sufficient detail to transport you to a specific place; she really encapsulates what a traditional London pub is like for instance. I like that she has visualised our modern society, (her comments about fandom especially struck a chord that made me question and think quite deeply about what she had written) but I sometimes get exasperated that long meandering narratives that serve no purpose and just grate on the reader are incorporated.  “ ’Is there any chance,’ asked Strike, as they were momentarily impeded by a tiny hooded, bearded man like an Old Testament prophet, who stopped in front of them and slowly stuck out his tongue, ‘that I could come and have a look inside some time?’”  It was a cleverly written sentence, but it served no purpose, it was as if she had had an idea and was so pleased with the sentence it had to be placed in the novel.

Whilst I enjoyed the book, I did feel the plot was a little loose. I’m a little conflicted by the ending.  I was a little disappointed and confused (I can’t say too much without giving the ending away) but on the other hand it was a clever twist, obviously the guilty party was playing on the idea that Cormoran was a bit of a loser and desperate for cash, therefore he didn’t have the wherewithal to put the pieces of the jigsaw together!

Despite the book being far from perfect, I finished the book craving more; fortunately it was easy enough to slake my thirst for more of Mr Strike… The Silkworm was already downloading to my Kindle App!

Anyone for Bombay Mix?

Bombyx Mori – it’s latin for ‘silkworm of the mulberry tree’, but as I raced through book two, my mind kept changing the words to Bombay Mix, I have no idea why, although I did think the phrase was overused! 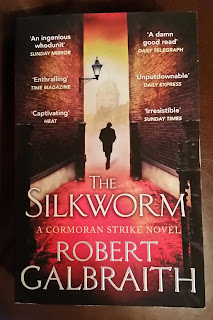 Owen Quine is a novelist who wrote the novel Bombyx Mori, a book that betrays his editor, publisher, agent…and now he has gone missing.  We’ve left the world of models and fashionistas behind to replace it with a world of novelists and amateur writers. This book is faster paced and a lot darker and gorier than the first novel and to be fair to Galbraith the writing has steadily improved from book one, but I found it still kept grating in parts. The Silkworm is not a silky smooth read!

Whilst I might be considered too critical, I found that maybe I am not the only one uncomfortable with the narrative of the book; Galbraith actually points out the issues in the novel with a huge highlighter pen! Whilst diving into the background of a self-published writer, Robin, Strikes partner, finds a potential suspect’s blog.  She states, “A lot of it’s about how traditional publishers wouldn’t know good books if they were hit over the head with them.” Galbraith then tries to inform the reader what the difference is between plot and narrative. "Plot is what happens," "narrative is how much you show your readers and how you show it to them." I don’t wish to discredit Galbraith, I find the imaginative side of her writing phenomenal, but, if I think back to when I tried to read Harry Potter, the main thing that struck me was how one dimensional the characters were. I didn’t care about them at all and thus I never got further than part way through book four. The Strike novels have addressed this particular problem to an extent, but I have to be honest with myself and wonder whether my love for Strike is because of Galbraith’s prose, or because I can visualise Tom Burke playing him. I honestly suspect it’s the latter!

That said the structure of the second book was certainly better than that of the first. There was more complexity around the crime, and the growing relationship between Strike and Robin is mesmerising.  There is a level of humour that lightens the mood, although often Robin is rather daunted by Strike and his ambivalence towards the horrors that they have witnessed.

The compulsive nature of these books meant that as soon as The Silkworm was finished I needed to know more about the fortunes of Strike. I became obsessed with him and found myself finishing book 3 at 6 o’clock in the morning!

I’m making a Career of Evil…

Career of Evil is by far the best of the three books. Galbraith has found an intimacy with her characters and they have begun to flow naturally from the pages. In book 3, Robin takes delivery of a gruesome package, we recoil with her, and we feel her repulsion when she opens the packet to find a leg has been sent to her together with some lyrics from the band Blue Oyster Cult.  Strike is gloriously deadpan as he tells the police that the leg isn’t even his size (Strike having lost his leg in Afghanistan!) and this wry humour lifts what could be a novel that takes its-self too seriously. 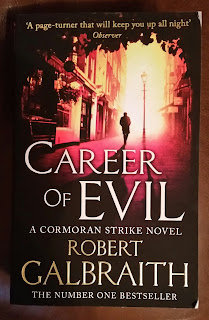 Just as Inspector Lestrade was dismissive of Sherlock Holmes, and Inspector Japp was dismissive of Poirot, Strike has upset the police too many times and so they are scornful of his suggestions that this is no ordinary crime. This crime is personal, someone is after Strike and they will use whatever means necessary, including Robin, to undermine and hurt him. And so the game is afoot, pardon the pun, to delve into Strikes murky past to work out who is sending body parts to Robin…and it turns out that Strike has upset a multitude of people during his life, so it really could be anybody!

If Strike thinks that trying to locate a murderer is a complex affair, then that is nothing in comparison to the quirks of human nature.  Robin is trying to organise her wedding to Matthew, and Strike is trying to establish a relationship with a gorgeous but dull woman in the throes of divorce. What is blindingly obvious to the reader is wasted on Robin and Strike, however hard they try, it is crystal clear that their feelings for each other far outweigh the feelings they have for their respective other halves!

Career of Evil has it all, complex relationships, an enormity of disturbed characters intent on revenge, a travelogue up and down the country from Scotland to London  (I specifically liked Robin’s trip to Harrogate…I love Betty’s tearooms, and if I’m there I always have a pot of Betty’s house blend tea and a fat rascal. Galbraith did not disappoint, both got a mention…and it reminded me of earlier in the year when I bought Betty’s tea and fat rascals for Tom!) And let us not forget Strike’s amusing sofa that is constantly mentioned throughout the book. If the BBC adaptation doesn’t have the farting sofa, I have my complaint letter at the ready!

So roll on book number 4. I have been converted! They are not the greatest pieces of literature in the world, but they are compulsive reading, you want to turn the next page, you want to know what happens next. And whilst it is fun trying to solve the “who dunnits”…the biggest mystery of all is what will happen between Strike and Robin…that is…if anything happens at all!