October 03, 2016
I really can’t believe how quickly September has passed me by (or how bad I am at keeping the blog up to date). September is the month of my birth and so I decided I would celebrate it by seeing The Deep Blue Sea more times than is strictly necessary…although in my mind the show was extended into my birthday month for a reason…and it would be very rude not to take advantage of the fact! 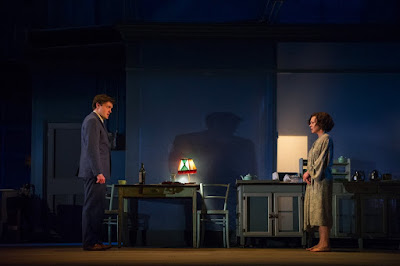 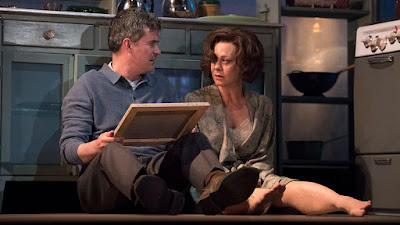 I started my birthday celebrations by visiting my local cinema on 1st September with some friends, who could not make it with me to London, to watch the NTLive version of The Deep Blue Sea. I love NTLive, it means if you can’t get to London, London can come to you.  I actually realised that it brought a different perspective of the play to me. I was able to see close ups of faces and see Helen McCrory physically shaking as Hester. For the first time I saw Hester’s frailty and I felt some sympathy towards her character; I still thought she was very needy and manipulative, and I still feel more empathy towards Freddie, but for the first time my blinkers came off and I could see another facet of the story! It was interesting how the dynamics had changed from watching it live on stage, to watching a live recording! The 2nd September had me back on the now familiar journey to London!!!!

The House at Lydda - Sam Wanamaker Playhouse (The Globe).

I was treated to a gorgeous dinner at The Ship by way of a birthday pressie before settling down to watch the play.  The playhouse itself is so beautiful. If you have never been, go! The playhouse is a small and intimate space, lit by candlelight. It is beguiling and as I sat in awe waiting for the play begin, I looked up at the painted ceiling which reminded me a little of an old deck of tarot cards! I got a quizzical look from my friend before I admitted that I dabbled a long time ago. I can’t remember much about it now; so much so, I read a book called The House of Rumour by Jake Arnott a while back and I had already read a few chapters before I realised that each chapter was based on the Major Arcana of The Tarot!!! (I remember reading the book and wondering if it was intentional or not that the writer had switched the order of The Devil and Death.) Fortunately before I could continue with this train of thought, and to the relief of my friend, the play started! 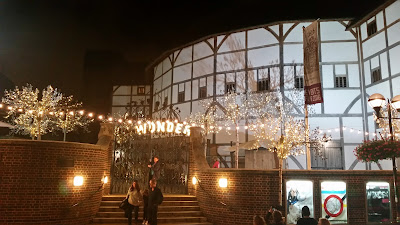 The House at Lydda tells the story of the critically ill Roman Emperor Tiberius Caesar. He has heard of this healer who lives in Jerusalem and sets out on a voyage to the Holy Land so that he can be healed by this miracle man. Upon reaching the city of Lydda, he finds out that the man he is searching for has been crucified 3 days earlier. Tiberius is distraught that he is too late to be healed, but then he has a chance encounter with a chap called Jesus! It was a fabulous play, and my friend and I left the theatre ready to discuss our thoughts, but before we could, we were immediately transfixed by St Paul’s cathedral which appeared to be on fire! 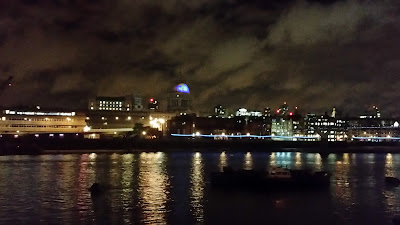 We stood and watched in awe as the dome appeared to flicker and burn as artificial flames licked around the dome. Somewhat dazed and confused we continued heading up the South Bank towards the Tate Gallery; everywhere appeared to be on fire. Plant pots we had walked past earlier danced and flickered on fire, the heat being emitted was extraordinary.  And then it suddenly made sense, it was 350 years since the Great Fire of London, and this was a week of celebrations, finishing a couple of days later with a model of a replica skyline being set on fire. 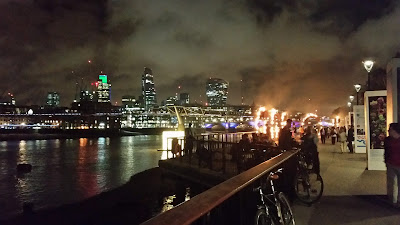 As we left the flames behind and neared The National Theatre on our walk back to our hotel, we decided to stop off for a quick glass of prosecco and to chat about our extraordinary night. We finished chatting and gathered ourselves for the final stage of our route home, believing that we had had the most fantastical evening possible, and then we bumped into a familiar figure making his way home. “Oh hello Tom” I quipped!  My friend Cheryl then said hello and Tom asked if we’d been to see the play. “Erm, no! We’ve been The Globe…BUT, we will be watching you twice tomorrow instead!!” The three of us had a lovely conversation about all manner of things, then Tom went on his way and Cheryl and I headed off to our hotel.  What an amazing and extraordinary evening!

I had been lucky enough to notice that there were cheap seats available for The Deep Blue Sea, so I was able to buy tickets for the matinée and evening performance on Saturday, and they were close to the stage (rows B & D…I don’t like row A even thought that was available!) Yes it IS overkill, but you only live once and it was like watching the live stream again, you could see and hear everything. As I sat waiting between the two performances, wondering if Mr B would make an appearance, my tummy started talking to me. I grabbed a pizza, and the minute I shoved a quarter of it into my gullet a certain someone turned up and said hello! I was not impressed as I tried to mumble “hi” back!! I did eventually manage a few words before saying I’d hopefully see him later. 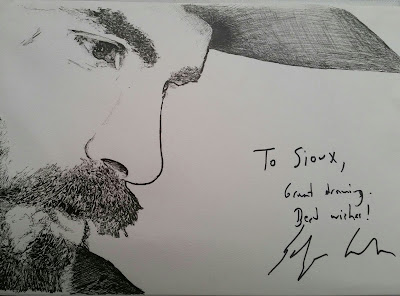 As we took to our seats for the evening show, a buzz went round the theatre that Santiago Cabrera was there. I saw him come in and take his seat and I noticed he was on his own. Cheryl said to me, if he is on his own shall we buy him a drink at the interval? I agreed! At the interval we found him wandering round the bar on his own, so we did buy him a drink, and a small group of us chatted to him. I have been blessed to meet many famous people over the years, some charming, some fools, some I’d rather not say, but I am so pleased I met and chatted to Santi. He is such a charming man, quietly spoken but so enthusiastic about his job, and he had plenty of kind words to say about his mate Tom! That really struck a chord with me, you often see in press reports “oh yes we’re great friends off set” but this showed it was true and that the actors are truly supportive of one another in their new ventures. We chatted about filming his new movie, and how he had taken to fatherhood. Santi then whipped his phone out of his pocket and started showing us pictures of his son. He was definitely one very proud father and it felt like an honour to be sharing these prized photo's with him. 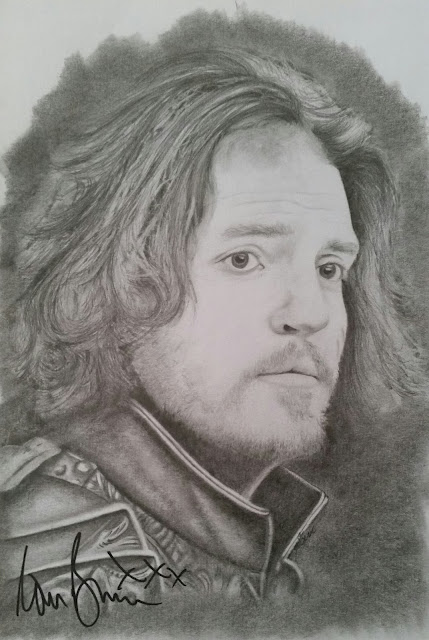 After the performance we sat outside the stage door wondering if Tom would come out. We thought he might not have time for us bearing in mind Santi was over from LA, but to my surprise and delight, both of them came out and talked to us. Santi tried to stay out of the limelight' however, I had brought a drawing for Tom to sign so it could be auctioned off for the Operation Smile Tea Party. I had kept the drawing with all of my other Musketeer drawings and I remembered that I had an ink sketch of Santi with me, so I slipped away and asked him if he would sign it for me. He seemed genuinely pleased to be signing something Santi related and not just Tom’s Deep Blue Sea programme which other people had asked him to sign. And as for the drawing of Tom/Athos...well Tom's reaction really took me by surprise. I just asked him if he would sign it, I was stunned that my sketch seemed to transport him back to when he was filming the scene with Luke. It still makes me smile just thinking that not only did he recognise himself, but his recognition of the actual scene too.......ho hum!!!! ;-) 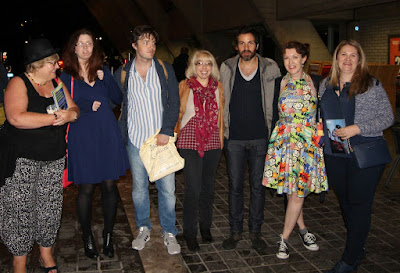 Ah, it is so hard to believe what magical encounters happen in the World of Burke…and there are yet more to come in Goodnight Mr Tom…Burke! (part 2)!


Thank you to @c_u_thru_a_lens for the photo on the left.


(Tea party, confessions and more meeting with Muskies to come in part 2 – September was a birthday month to remember!)