A couple of non-eventful weeks passed, which gave me time to finish The Cheshire Cat and my “M’lady de Winter vs The Queen of Hearts” costume for the Operation Smile/Burketeers “Mad Hatter” tea party. I do like to set myself a challenge, and this was going to be a huge challenge! I am positive the man in the local hardware store thinks I have a glue addiction! 7 litres of PVA glue later (yes 7!) and “Chesh” was ready for his paint job. Now I’m not a huge fan of Disney, I don’t like sugary sweet films, so my Cheshire Cat was not going to be the fluffy pink cat people were expecting. The fact that a cat can disappear leaving just a big grin in the air is a bit disturbing, and I think my cat had just the right element of being bright, but a little maniacal! (My favourite drawing of The Cheshire Cat has to be Arthur Rackham’s version - below).

My dress was also a great challenge. It’s the first costume I’ve made in a while and it’s the first time I have tried to make a corset. I’ve always fancied doing the course at RADA in corset making, but it’s very expensive and I didn’t know whether technically I’d be able to do something so fiddly. I really loved M’lady de Winter’s red cape dress from the first series of The Musketeers. I thought I could do a mash up of her dress, and the Queen of Hearts, as I was going to a Mad Hatters Tea Party. I must say, by the time I had finished I was actually rather proud of my handy work. I think I’d done rather well, especially with my tea cup fascinator!!! 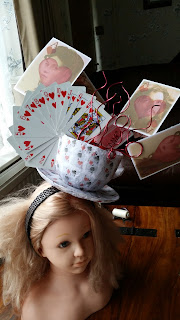 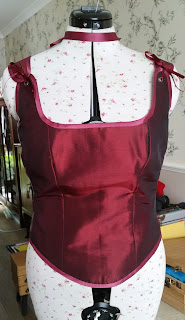 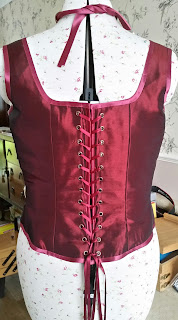 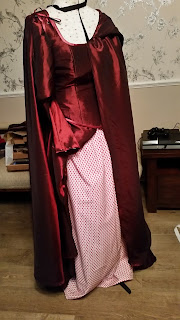 Friday the 16th September, and back down to London. Fortunately I arrived at Chester station 45 mins early for my train. Good job I did because there had been problems with the weather in London and my train had been cancelled! Horrified I ran to the ticket office. Before I could say two words the lady at the counter said “SHUSH” “Platform 1 to Crewe leaves in 3 mins. Go to Crewe and get on any train to London…now run.” So I did…whilst shouting “oh my god I love you!” I squeezed onto the train which was packed, and managed to get on the first train to London, nabbing myself a table seat with plug socket so I could read my Cormoran Strike book. Yes you read that right. I thought the books would be that terrible I downloaded them to my Kindle app rather than buying paperbacks. By the time I’d got to Waterloo I’d popped into the bookshop, bought the paperbacks and decided I’d get Tom to sign them all; seeing it was his fault I’d deigned to read them in the first place! (Tom of course will be playing Cormoran Strike in the TV dramatization of the books if you haven’t guessed!)

In the evening I headed off to watch The Deep Blue Sea (is there anything else on at the theatre?!) As I sat down, I thought I recognised the lady about to sit down in front of me. HELENA BONHAM CARTER!!! Arghhhh. HBC is sat in front of me, hang on a minute, she played the Queen of Hearts in Alice in Wonderland…and I’m dressing up as her tomorrow at the tea party. Well that’s kind of freaky!

We saw Tom after the show for a hug and a quick chat, I managed to confess to him to that after telling him previously that I would never (ever) read the Cormoran Strike books but would be happy to watch him on the telly…I’d gone and read the books and they were ok. I even managed to bore him rigid with an in-depth analysis of the books! Once he had regained consciousness he signed book number one for me. I had to laugh when I read it, we were no longer on formal terms, and after his message he signed it “Tom.” Apparently we don’t need surnames now! Tom still had things to do, places to go, and couldn’t stay too long, so he went back into the theatre and brought Peter Sullivan down for us to talk to instead! What a lovely man he is, collectively we discussed the changes he had made to his character which we’d witnessed throughout the run. When we each told him how many times we had seen the production he said “WHAAATTT?” It was a brilliant moment! His poor bewildered face!

Saturday was the day of the Mad Hatter’s Tea Party. My friend Fiona had done a fantastic job of organising the whole event. It was held in The Duchy Arms, Kennington and the staff couldn’t have been more obliging. Fiona had paid so much attention to detail; we even had flamingo croquet outside! There was a hat competition, and everyone had put a considerable amount of effort into designing and making their hats. I arrived in my jeans and got my friend Cheryl to help corset me up. I tell you what, I could do with wearing a corset every day; it must be the first time I’ve stood up straight in the whole of my life! Sadly it meant not too much eating, but there was plenty of room for a cheeky glass of prosecco or two. As the afternoon of revelry drew to a close, I asked Cheryl to help me out of my costume. I was not going to The National dressed as M’lady de Winter!  Cheryl said she would join me, 10 mins later there was no sign. Thank God Angie was in the toilets to help me out of my bindings! By the time I had got dressed and sorted myself out, I went back into the main room. Cheryl was still merrily chatting and had obviously forgotten all about me! 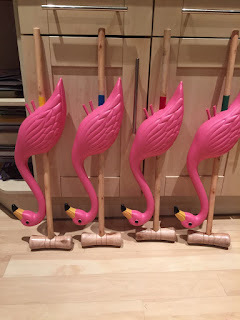 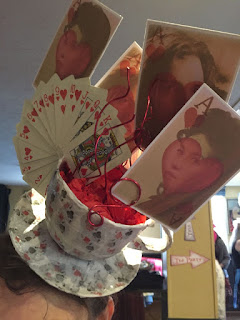 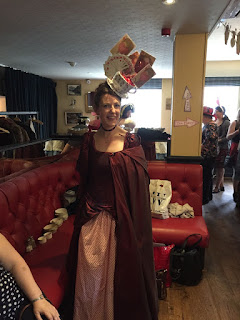 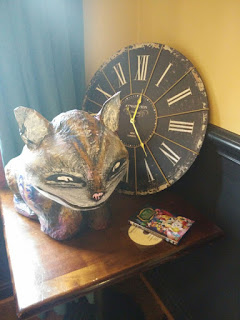 We left the pub and headed off to watch The Deep Blue Sea – surprise surprise! Well, there was a surprise waiting for us, Minister Treville from The Musketeers was there! We saw Hugo Speer just before we were going to head into the theatre; we introduced ourselves and asked him if we could buy him and his wife a drink in the interval as a thank you for such a special show. He said that was kind, and he held the door open for us allowing us to take our seats. Well blow me, he was sat in the row in front of us. At the interval he came out, and whilst Cheryl headed to the bar to buy him a drink, I asked him what he was up to now. He talked about his work on a new 10-part drama called Britannia. He said it was set in 43AD and filming was taking place in Prague! So no sooner had he left Prague when he finished The Musketeers, he was back again for this! 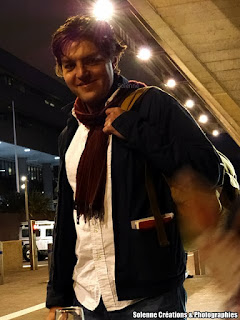 After the show we sat outside having a drink, wearing our tea party hats! No-one gave us a second glance! Eventually Tom came out and grinned as he saw how ridiculous we looked and he came and signed my third CS book. I don’t know why I told him I’d finished reading it at 6am, but the message he wrote was brilliant…as he handed my book back he said “hmm that could be taken the wrong way!” He stayed for as long as he could, he was heading out with Hugo and his wife, so I think we all managed to get the photo’s and signatures we wanted before waving him off and shouting  we’d see him on the final night. We then decided we really needed to find a chippy, and as luck would have it, one not far from our hotel was still open. Those chips were like the food of the Gods! 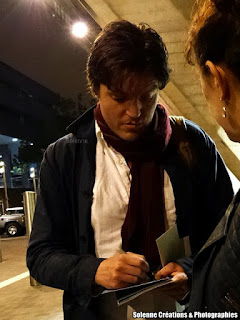 I went home for a couple of nights, and then headed back to London for the final night of The Deep Blue Sea. (Really, you’d think Virgin would have given me my own personal seat by now!)
The last night of the show was exceptional. I think every actor threw their all into it; the play was on an entirely different level. Tonight Tom was shouting at Helen, Peter started out speaking quietly to Helen then raising his voice by the end. She was sobbing her heart out. Oh they all really went for it leaving the audience in no doubt that it was worthy of a standing ovation!

It has been an amazing time coming to see this play. I’ve seen how the play has metamorphosed, and discussed with actors why they have made the changes they have, what’s worked, what hasn’t. Obviously it was a thrill to be able to speak to Tom so many times, not many people are blessed to see their hero, let alone engage in conversation with them. But I was a little bit sad that in all the times I’d been down, I hadn’t got Nick Fletcher’s autograph, or met Helen McCrory.

This was my last chance. As I hustled my friend over to say hi to Peter Sullivan, I suddenly realised the lady hidden by a huge bouquet of flowers was Helen. “Please will you sign my book?” I asked. “Yes” she said looking for it. I said “hang on a mo, I left it on the table.” NEVER have I run so fast in all my life. It was worth it though.  Helen’s signature was on my book and I had a quick chat (very quick, I couldn’t breathe let alone speak!) Do you know this must have been about 11pm and she was going to be off filming at 4am the next day! 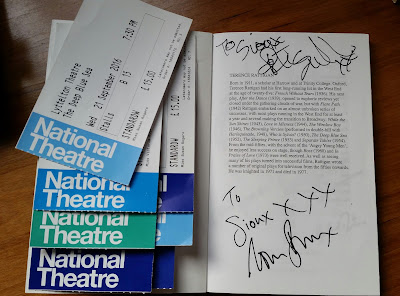 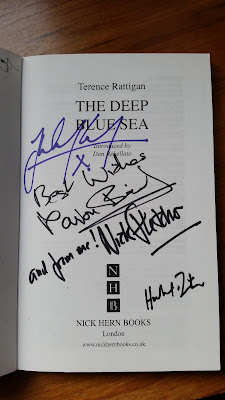 So there was only Nick to go. I did the unthinkable. I saw him head to the bar with his friends, so I went up to him, apologising profusely, and explained that I kept missing him and I would love his autograph as I thought Miller and Mrs Elton were the best two characters in the play. He was brilliant. He didn’t seem to mind me interrupting him, and he seemed surprised to see all those National Theatre tickets glued to the front of my play book. I got the chance of a quick chat, and left happy in the knowledge I had all the autographs I really wanted…I think by the end I was only missing two signatures! 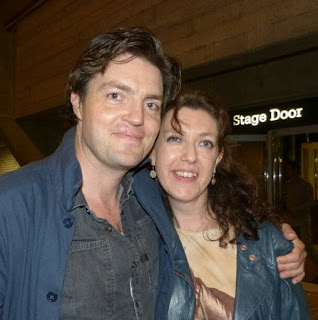 And so that was that. I’d given Tom a goodbye hug and told him he’d be great as Cormoran and now it was all over.  Time to say goodbye to watching the same play over and over again, and goodbye to the mass of Burketeers’ crowding round the stage door! Well…that is until the next time Mr B takes to the stage.  [You know you can’t escape from me that easily Mr B!!! ;-)]