In 1889, Leo Tolstoy’s novella The Kreutzer Sonata was published.  It told a stark tale of jealousy, betrayal and obsession. It was named after the composer Beethoven’s The Kreutzer Sonata and it told the tale of Pozdnyshev, a man who claimed he had killed his wife because she was unfaithful.

In the novella, the tale is told by an unnamed person on a train; it features the husband’s story, but his wife and her “lover” never get to tell their side of the tale.  In this dramatic work, the audience visit the music room where the infidelity is supposed to have taken place, and through music and speech two dramatically different scenarios are pieced together. By the end of the evening you are left wondering whether the wife was faithful, or if was she rightly condemned by her husband.

Jemima Rooper (Kinky Boots) and Samuel West (Mr Selfridge) star in an exceptional play for voices. There is no dominating set, or beautiful costumes to distract the audience, instead clever use of language, rhyme and rhythm create evocative pictures in the audiences mind. Together with complete performances of Beethoven’s Kreutzer Violin Sonata and Janácek’s Kreutzer String Quartet the question is raised whether music can create a strong sexual desire between a man and a woman, and whether it can cause a man to commit murder.

Beethoven’s Violin Sonata No 9 is a wild piece of music in three movements. Rooper and West cleverly enact quick-witted dialogue between each of the three movements at a fast pace which matches the fast notes of the music, which at times seems rather frenzied. It is interspersed with moments of lucid calm. It embraces the mood of the husband who is consumed with these wild imaginings that his wife is not having a music lesson or practicing a duet with her violinist teacher, she is having a wild and torrid affair instead, culminating in him imagining that they are making love astride the piano! 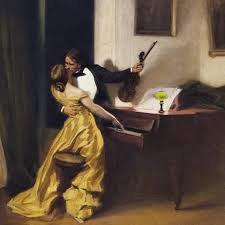 In the Second Act, the start of the play mirrors the start of the first Act, but Janácek’s String Quartet No 1 “Kreutzer Sonata” (1923) provides the audience with a contradictory story. What if the wife was the object of another man’s desire, but she never reciprocated his feelings? The Czech composer had fallen in love with a married woman and he was sympathetic to the plight of Pozdnyshev’s wife. Rooper gives an incredible heartfelt performance about why she should be to blame if a man falls in love with her. Surely it is the man’s fault and not hers.

Again, the writing mirrors the tone and tempo of the music. The music in the First Act ebbs and flows with exuberant dynamism, but the Second Act the music becomes disjointed, even “alienatory” as the violins start screeching intermittently, and thus the dialogue becomes more strained, more desperate. You feel uncomfortable as you try to consider who the guilty party is in this love triangle, because you can never truly know whether the wife was innocent or not.

The juxtaposition of music and theatre was explosive. Watching the orchestra play both pieces of work showed just how passionate music can be. As a musician gets drawn into a piece of music, it is not just the instrument that sings, the body takes over until the person playing is consumed by the score they are playing. Could the passion of the music be felt by two disparate bodies and could this be a catalyst for the husband’s jealousy, that two people can be connected by something that he cannot feel or understand?

I was enthralled during the evening. It was a magical mix of literary genius coupled with extraordinary music, which brought home that we were witnessing a tragic event unfolding before our eyes. My only complaint?  That it was only on for one night!
Home Theatr Clwyd Theatre Reviews