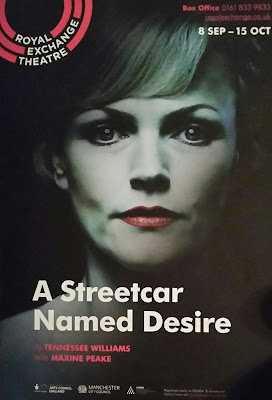 I am a bit of a fan of Tennessee Williams. I love the way he writes about real people. He wasn't afraid to shy away from domestic issues or bring mental illness out of the shadows; he showed people what is was, an illness and one that affected real people. I watched Cat on a Hot Tin Roof and The Glass Menagerie in February, so when I saw that another of Tennessee Williams’ classics was being produced near me, I thought I should make the effort to see it; especially as it was starring Maxine Peake who I had not seen on stage before.


Maxine Peake is a familiar name to the Manchester Royal Exchange, yet whilst I’ve watched her on TV I’ve never seen her on stage, so for me it was interesting how well she would translate from screen to stage.


Williams’ plays work because he writes from the heart. His family life was dogged by mental illness, and so he was in a position to bring these issues into the public arena, not overly sentimentalising things, but showing the world that people should be treated carefully, and respectfully. He was close to his family and carried a lifetime of guilt about how his sister Rose was treated. She was given a lobotomy in 1943 which he said left her permanently institutionalised.  His feelings towards his sister and how she was dealt with are most prominently seen in The Glass Menagerie.

Here, in Streetcar, he deals with the nostalgia of his mother and sister and their love for the Deep South. This is endorsed in many of the female characters he has so carefully crafted. In this production, Peake has manged to take the soul of Blanche DuBois and make her this delicate individual, you sympathise with her plight, yet you don’t feel sorry for her. She has this harshness in her turn of phrase that stops you feeling too sentimental for her.

The staging of the play helps to add closeness to the characters. As Blanche arrives at her sister’s flat, you arrive with her, right into the centre of things. You are practically sat in Stanley and Stella’s home. It is almost like a fly on the wall documentary. You feel a bit like an voyeur, spying on the truth that goes on behind closed doors.

As Blanche sweeps in, in her glamourous clothes and dark shades, to this darker side of tenement life, you see a snob, someone who looks down her nose. Stanley is beneath her. How could her sister marry such a common person? Blanche is disgusted that her sister lives like this, a one room flat with a bathroom. She has to share the same room as her sister and husband, mattresses lying on the floor to sleep on, but from the start you can see this is all a façade. Blanche is pretending her life is perfect, but is she pretending so she doesn’t lose face with her sister, or is it because she cannot bear to face the
reality of her situation?

It is the element of uncertainty about Blanche which draws you into this play. Peake’s performance is exceptional. She has a real connection with the audience, even at the height of her most awful comments. She can’t stop calling Stanley a “Polack” even when he tells her he is as American as she is. She is living in a world of make believe; as she states she doesn’t really drink, you see her sneaking a quick tipple from the hidden bottle of Southern Comfort! This fragility is exquisitely realised, especially when Stanley delivers the cold hard facts to Blanche as he finds out about her non too perfect past!

Ben Batt is a credible Stanley. Having watched Marlon Brando in the film version, Ben had a lot to live up to.  He watches, listens, and then delivers the truth with an unassuming brutality, both physically and mentally. As Blanche slowly disintegrates before our eyes. It is hard to watch Stanley and Stella’s treatment of her. You can understand why they are frustrated by Blanche’s lies, but they never try to understand why she feels the need to live in world of make believe, they never really talk to her. Blanche is secretly crying out for help, but no-one sees this.

At times it is an uncomfortable play to watch, but this is because of the themes, not the performances. Watching someone descend into madness in front of your eyes is both fascinating and painful. As Williams himself said “to desire a thing…is to place yourself in a vulnerable position. And as Blanche delivers her final lines directly into the eyes of the audience, you feel most intimately that vulnerability.
Home Manchester Tennessee Williams Theatre Reviews