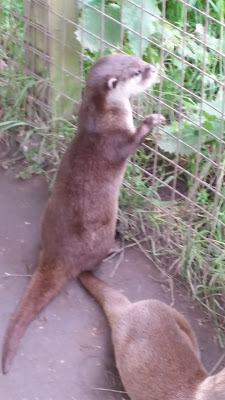 I visited the Cotebrook Shire Horse Centre in the summer. Whilst the horses were stunning, it was the otters that held my attention. They were cheeky creatures, holding onto the wire fencing and making high pitched screeching noises. One of them just lay on his back and played with a stone; he was transfixed tossing it from one paw to another. I thought the poor creatures were bored and unhappy, but no...they were just passing the time as they knew their food was due to arrive soon. As soon as they saw their keeper, the stone was dropped and the screeching stopped, to be replaced by the hunting and satisfaction of munching fish in the long grass.

A few weeks later I was visiting the Blue Planet Aquarium. They have an outside pen of otters too, and I witnessed them playing in and out of the water; otters splashing one another, finding "toys" in the undergrowth, and so I was spurred on to find my old copy of Tarka the Otter that I have had since childhood, but never read. (You can tell it's an old copy of the book, it only cost 30p!)

Henry Williamson's tale of Tarka takes us through an unsentimental journey around Devon. It is a fascinating book for both old and young, male or female, and will leave you with a new found respect for the countryside. What we have lost, how we have grown, and why hunting with dogs should never be considered sport.

The book is written from Tarka's viewpoint...that of being low on the ground, shrubs become trees, man becomes a giant. Henry Williamson begun his novel in June 1923 and finished it in February 1927. He wrote and rewrote passages to ensure he gave his reader the truest viewpoint of a wild otters life, taking in the smallest details of the river, so that armed with a map, the reader could follow Tarka's journey. You get the sense whilst reading the book that this is a true story, and that's not far off the mark. 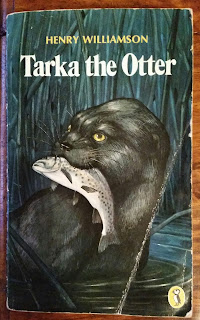 After the First World War, Williamson was a lost soul. He left London behind him and rented a cottage in Devon, living there alone, except for the wildlife surrounding him. A stranger knocked at his door asking for help digging out some otter cubs from a hole after a farmer had killed their mother. He only found one cub alive and took it back to his cottage where he introduced it to a cat who was still nursing a kitten. After some intervention, the cat accepted the otter cub and nursed it until the cub was old enough to eat solid food. He followed Williamson everywhere, but on one walk he got caught in a rabbit trap. Writhing in fear and pain, Williamson was able to free the cub, however that was the end of their relationship. The otter fled, never to be seen again. This was where the story of Tarka began. Williamson was already at one with nature, preferring it to human contact, but in order to understand the otters life he would have to enter into the world of the huntsman. So Williamson entered the otters world, seeing it both as a carefree animal playing in the river, and that of the fearful persecuted animal, desperately fighting for his life.

"She ate her prey, holding it in her fore-paws and crunching with her head on one side."

As soon as I started reading this book, the otters from the Cotebrook centre entered my mind. They too ate with their heads to one side, merrily crunching on the bones of the fish they were eating. They looked so joyful, so full of satisfaction. This satisfied otter was Tarka's mother. Tarka was the eldest of her brood, the biggest, a dog cub. His name meant Little Water Wanderer, or Wandering as Water. 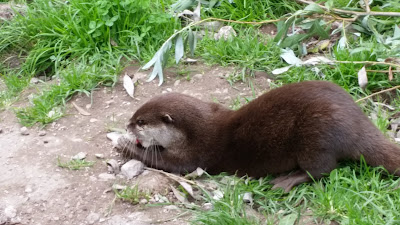 The keenest observations of an otter cub show they have similarities to a toddler. They mirror a child not getting their own way. His mother tried to keep Tarka clean, and as she washed him he kicked back at his mother, fighting to get his own way, struggling to be free of the tongue washing his face, in much the same way a child tries to shirk away from the wet wipe a mother insists on clearing all traces of crumbs from their child's face. Tarka also showed that inquisitiveness of a child learning by play. He finds the skull of a field-vole... "Tarka moved it between his paws; some of its teeth dropped out and rattled inside the hollow." Tarka had inadvertently made himself a rattle, and he played and played with his toy. This reminded me of the young otter at the centre, lying on his back, tossing a stone from paw to paw and squealing with delight.

Williamson's novel takes us through the stages of Tarka growing up to adulthood. His first encounter of learning how to swim, spluttering and sneezing as the water went up his nose. The terror he felt when hiding from the hunt as a cub, and the relief when he found his mum again. This is a warts and all account of life in the wild. It's not pretty. Whilst otters fear the huntsman, animals fear the otter. The fox flees from a hole for fear of the otters sharp teeth and claws. Frogs are caught and skinned for supper, bits are left behind for the hedgehog to pick up, only for the hedgehog to be caught and eaten by a badger. But none of the hunting in nature comes close to the animals greatest enemy...man.

Nature is a cruel beast 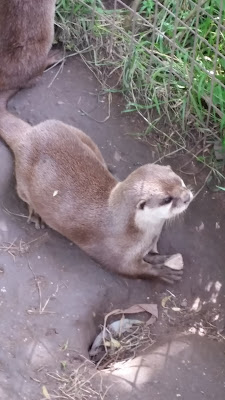 A poignant moment is when Tarka is no longer a cub, he knows he has become a dog when his days of play in the river with his mother are over. She hears the mating call of a dog otter and instantly forgets who Tarka is. It is time for Tarka to leave home, to forget his mother and sisters, as they have forgetton him. His journey takes him to the sea, and the arctic icy winds of winter. There is a desperation amongst the wild as cold and hunger sets in. An otter kills a swan, which a fox tries to steal. The badger however succeeds them all, leaving with the prize whilst the losers look on, starving, falling asleep, never to waken again. But in all of this bleakness there is a poetic resonance throughout. Williamson's writing sings to you like the tinkling of the streams and rivers of summer, "snow began to fall in flakes like the breast feathers of swans." In this harsh landscape, nature still lets her beauty shine through.

"When the bees' feet shake the bells of the heather, and the ruddy strings of the sap-stealing dodder are twined about the green spikes of the furze, it is summertime on the common."

Summertime comes, and with it new challenges. The otters return to the river to play and squeal and mate, but their whistles fall on human ears where landowners see fit to hide traps in the water to catch or maim their victims; trapping and bringing them to their watery graves as they fight to release themselves.

When you read the book you are transported back to a far off time when the land was full of Bog Pimpernell, and John-go-to-bed-at-noon. Where Curlews, Turtle Doves, Snipe and Ring Plovers fly around the landscape in their droves, and hounds are legally allowed to tear otters apart in the name of sport. It is a time gone by, but the novel doesn't feel antiquated. The way it has been written is so visually stunning you could be fooled into thinking you were watching a David Attenborough documentary. There is such attention to detail that you would think you were reading non-fiction, but then you are transported into a land of poetry as your mind wanders across the various landscapes.

This is a book that has stood the test of time, and long may it continue to do so. It gives us an insight into life in the wild, and why, if conservation is needed, it should be carried out sympathetically, and not by the call to the hound. Hopefully those days are long gone for the otter, and may it stay like that forever.