October 12, 2016
Well that was the week that was! Monday was a trip to Theatre Clwyd to see Kreutzer vs Kreutzer based on Leo Tolstoy’s novella.  I’ve already written a review for that one, but must say once again what a joy it was to see Sam West in the flesh! He’s an incredible actor.

A couple of days in work and then it was time to head off to Manchester to watch Maxine Peake in Tennessee Williams’ classic A Streetcar Named Desire. I can’t remember if I’ve ever been to Manchester’s Royal Exchange theatre before…I’m sure I must have been when I was younger, but I really didn’t recognise the place. From the outside it is a beautiful grade II listed building, inside the building’s Great Hall sits the theatre, a circular steel and glass construction. The unique design means that plays are shown in the round, seating surrounds all sides of the stage, and this brings an immediate relationship between the actor and the audience. I can't believe just how close to the action the audience are. No barriers, the audience are practically part of the stage!

Friday. After spending the night at my friend’s parents’ house, I was kindly dropped off at Stockport railway station for my trip to London. What an amazing journey! I normally end up reading and talking to no-one when I travel from Chester, however, this trip was filled with fun and laughter. The couple who were sharing the table seat with me seemed nice; we exchanged a few words and then did our own thing for a bit. There was a man sitting on the table next to me who somehow looked familiar but I didn’t know why. After an hour the lady opposite me said to the group in general, “so I’m really nosey and you all seem interesting people, why are you going to London? Work or pleasure?”  The chap near me said, “well I’m off for an audition for a new programme on the I-player that Simon Amstell has written.” “Really?” Well this was going to be an interesting conversation, and so it was! We had a nice chat with him, and then the lady and I had a good ole gossip. The time flew by in a carriage filled with chatting and laughter. I must remember in future to travel to London from Stockport and not Chester!!!!

I met up with my friends at St Pancras for lunch and Prosecco! We then meandered to our hotel and got ready for our first show of the weekend, The Entertainer at the Garrick Theatre starring Sir Kenneth Branagh. It wasn’t a play I was familiar with, but I thought it would be rather light hearted with a title like that…how wrong I was. It was a play filled with jokes but with some very poignant moments too. Sir Ken put on a fabulous show, but I left the theatre feeling like someone had ripped my insides out. I was almost void of emotion, a hollow feeling that I couldn’t explain…perhaps a sense of loss over the old music hall days when entertainers were funny because they were clever rather than puerile and smutty! It took a couple of days to come to terms with the play, and to realise why I had felt like that. 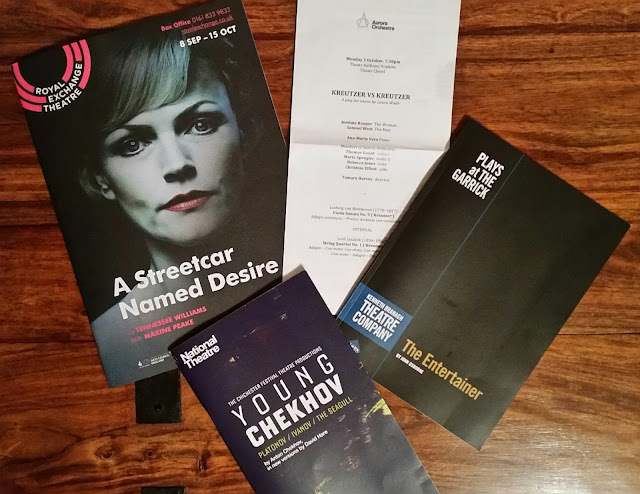 Saturday was Chekhov day, the day I had been looking forward to. Three plays one after the other, Platonov, Ivanov and The Seagull. I really didn’t know what to expect. When I read the plays they were rather heavy and full of angst; watching three in a row might be a bit too much. I was pleasantly surprised at the amount of comedy in the productions, David Hare had created three fantastic versions of these classic plays.

When I arrived in the theatre, I was entranced by the stage which was like a woodland clearing, silver birch trees loomed in the darkness. As I went to take my seat, I politely said excuse me to this couple, I then looked into the eyes of the lady and thought “Oh my God that’s Celia Imrie.” I smiled and said thank you. OMG…Celia Imrie is a couple of seats from me watching the same play!!!!

After the plays had finished, it seemed hard not to stick to The National tradition of running round to The Burketeer Table to have a drink. It seemed rather strange sitting there knowing that there was no Tom to walk out for a chat; however, we had our script book to hand and were ready to converse with the Chekhov actors if they were willing. Fortunately the actors we collared were up for a chat and happy to hand out autographs. They thought we were mad to watch all three plays in one day, and then when they realised we’d read the scripts too, I’m sure they thought we should be committed. A big thank you has to go to James McArdle who kindly chatted to us even though he had friends waiting for him (we did tell him to go and join them but he stayed to talk about Chekhov) and Geoffrey Streatfield who had just been announced as part of the cast for Wild Honey which we will be watching in January! It was such a fabulous day, and one that I was sad to see finish.

Sunday. Time to head home. It was a gorgeous sunny day, so I said goodbye to my friends who were heading to the airport and I wandered down to The National for a walk along the river. Cheryl had bought me a book about pretentiousness (that’s another story) and so I sat in the sun reading it, chuckling to myself upon reading the opening chapter. It seems that her comment to Tom was not as much of an insult as I had thought! Soon it was time was time to walk to Waterloo and back to Chester. And yes, the train journey home was quiet and uneventful, that Stockport train really was a winner!

Back home, and one last play to make it 7 plays in 7 days…and of course you already know, we can’t have a week of theatricals without our Tom! The BBC Radio 3 play that night was The Visa Affair by Jake Arnott, all about the life of Joe Orton. It’s a sorrowful and surreal tale, one I had forgotten about, but upon listening to Russell Tovey and Tom Burke, I started to remember elements about the story of the two pranksters defacing library books and the tragic events that unfolded due to the repercussions of their unruly behaviour.

I will eventually write a separate piece about the plays I saw and I know I still have Goodnight Mr Tom part 2 to finish, but I seem to be lacking time at the moment…I can’t think why!!!


So there we are; seven plays, seven days, and now the hit of reality! I don’t head back to theatreland for a whole two weeks, so I guess I should get a bit of writing done while I have the chance!