A Lie of the Mind – Southwark Playhouse, London

May 21, 2017
I don’t blog about all of the plays I see, all of the books I read or all of the activities I partake in; I write about the things which I have avidity for and which may be of interest to others. So when I start writing about a play within 24 hours of seeing it, you know it has left a mark on me.

As soon as the play came to the Burketeers attention, a group booked to see it, but I foolishly said no, I didn’t see the appeal of travelling a long way to see a play about domestic abuse. If it hadn’t been for a marathon box set of Elementary I would have missed out on a gem of a play. How so you ask? Well the name Aidan Quinn kept popping up on Elementary and it was like an annoying blue bottle buzzing around. WHY DO I KNOW THAT NAME???? Best friend Google told me he was in Desperately Seeking Susan (I loved that film when it came out – I was 12, forgive me!) It turned out that he was also in the New York production of A Lie of the Mind in ‘85. 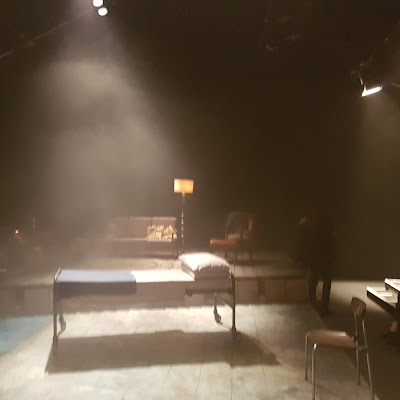 I’m not sure if I believe in serendipity or not, it does seem to happen to me a lot, but I took it as a sign to read the play. I bought a copy of the script and by page 5 I knew I would be buying a ticket and joining the other “Burketeers” for a highly intense and thought provoking theatre experience.

A Lie of the Mind is about Beth, a woman who has been so severely beaten up by her jealous husband that she has been left brain damaged and living back home with her parents and brother. Her husband, convinced that he has killed her, confesses his sins to his brother and returns to his familiar home to be nursed by his mother. On the surface of the play it seems that Beth is the troubled one, she is the one with an injury to the brain, but go under the surface and every member of the two families have their own deep, dark issues to contend with. 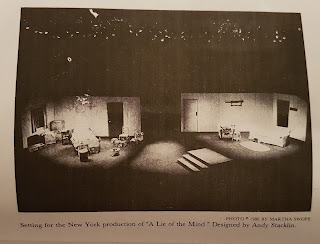 When I read the play, I couldn’t imagine how the large scale set of New York could be reduced to the small and intimate space of Southwark Playhouse, but clever staging and directing by James Hillier allayed all my fears. I loved the simplicity at the start of Act 1, whereby the cast simply turned a hospital bed around to switch back and forth from Beth’s story to that of her husband, Jake’s. This intimacy made each person’s story more powerful.

“You could see right through her damn blouse. Right clean through it. And she never wore underpants either. That’s what really got me. No underpants. You could see everything.”

The play centres around two families, both joined and torn apart by marriage.  It sounds depressing, but in amongst the darkness, there is a light of hope and strength of human spirit that refuses to be diminished. We don’t meet Beth until after she wakes up in a hospital bed, bruised and bandaged. We only have her husband’s words echoing in our ears to know what she was like before. Was she really a slutty dresser? Did she purposefully try to incite jealousy and rage into her husband? Was she a woman who liked to play with fire? Was this just all in Jake’s head? We will never know the Beth of the past; we can only see the Beth of the present, the Beth who has a childlike innocence, played so evocatively by Ali Dowling.

Beth inhabits a world of self-created delusion. Having suffered brain damage at the hands of her husband, she can no longer communicate as effectively as she once did. She shows the frustrations and inadequacies of human nature and learns to survive the only way she can, through her head, through the lies she tells herself. When I read the play I wondered what Beth would be like. If she was brain damaged, would she be able to remember any of her past, what life was like? Would she be angry and frustrated because she couldn’t do all the things she used to do? Would she be happy because she knew nothing else? She is a complex character and through the state of her mind she could travel in a number of directions. I loved Ali’s emotive take on her character and it answered many of my questions. At times she did show frustration, at others confusion, and throughout she showed the hope of one doing their best to survive the best way they can.

“Please don’t yell in the house. The walls can’t take it.”

But it is not only Beth that creates an alternative reality. You cannot access someone’s head, however hard you try; you can never know what someone is really thinking. You can never know what their take on reality is. Having been emerged into Beth’s family, you see that she is not the only damaged person, nor the only person to have suffered abuse. Meg, her mother is very meek and mild, but there is something about her demeanour that suggests this isn’t just because her husband is dominating and loud. She is fearful of conflict “Please don’t yell in the house. The walls can’t take it.”Nancy Crane trills, which seems an amusing thing to say and you chuckle when she says it, but then you reflect and think; how can a mother forget her own daughter’s wedding? Meg is a nostalgic character; she meditates on times gone past, such as Baylor fishing in the shirt that Beth has chosen to wear. But this is selective memory, she remembers the things she wants to remember, and blocks those she doesn’t want to recall. Why does she want to forget her daughter’s wedding?

Baylor, the father, prefers to spend the icy days hiding in a hut trying to shoot deer. It is hunting season and that’s what you’re supposed to do. But why do it? Why subject yourself to the freezing cold when it turns out you hate venison? This is Baylor’s world, he needs an excuse to run away and hide from reality. When Baylor and Meg visit their daughter in hospital, Baylor appears more concerned about selling his mules than showing worry or concern for Beth. Beth’s brother Mike does show his sister compassion, he sits with her trying to encourage her recovery in hospital, but he is a man of limited patience and frustrated by everything around him, included Beth’s inability to communicate with him. He is an angry man whose anger is exacerbated by what he allows his mind to tell him.

Tainted by events in their past

You would think that a man who beats up his wife so badly, to the extent that he believes he has killed her, would be the villain of the piece. Not so. At first you do hate Jake. There is no excuse for domestic violence, less so when he tries to avoid any responsibility for his actions, but as his story unravels, you realise how mentally unstable he his. Gethin Anthony gives such extraordinary life to this psychopath, a man who pretends to be insane, who psychologically unravels before our eyes as his unwitting mother tries to take care of him. The only person who can see through him is his sister, and that is only because she helped him to escape the blame for his father’s death by using the same tactics before. 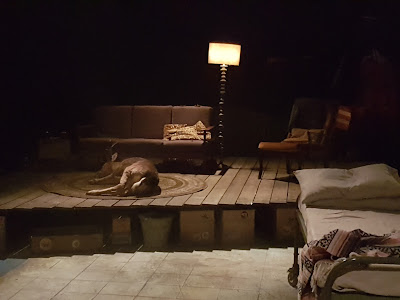 Lorraine, his mother, is blinkered; her son can do no wrong. He can’t have hurt Beth…and who is Beth anyway? It’s frightening how easily two mothers can allow themselves to forget their offspring’s wedding. But Lorraine needs to block out the pain of abandonment. Her marriage wasn’t a happy one, but that is a hard thing to admit to, so she feigns indifference. If you tell yourself you don’t care for long enough, you begin to believe yourself. So everything is fine. She is fine, her son is fine, her daughter is fine.

But they are not fine. Lorraine, Jake and his sister Sally are all tainted by the events in their past, what they have witnessed, and how they have chosen to remember those events. Sally tries to run away from the past but knows she can’t, she knows she has to face reality, she knows she now has to make her mother see sense, to tell her the truth about Jake.  She has tried to erase the memories of the Mexican drinking race that led to her father’s death just like Jake had, but she needs to leave the world of make-believe, she needs to come clean to her mother so they can start a new life together. She may be a minor character, but she is an important one and integral to the story.

The only person who doesn’t seem tainted by the past is Jake’s brother Frankie. Michael Fox’s character seems to be less affected than any of the other characters. He has a level head on his shoulders; rather than reacting to news, he seeks to find out the truth. Is Beth really dead? Sadly for him, his idea of finding out whether Beth is alive or dead leads to him getting shot and ending up with even more complex issues to deal with. The only character to have shown any stability is now locked in a house with a confused Beth looking after him! 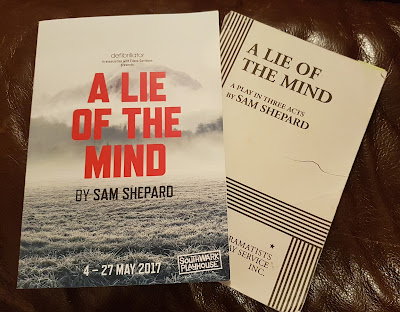 It is a fascinating play exploring the workings of the mind and the lies we tell ourselves, the worlds we create for ourselves and each other, how delusional we can become; how ambivalent we are of family relationships; how isolated people can feel despite being surrounded by people. The cast and creatives have done an exceptional job in creating this disturbed world. And whilst this play is set in the vast wilderness of Montana, America, it could be set anywhere; you don’t have to be in the wilderness to feel lonely and misunderstood. I feel very blessed that I watched this play, despite my initial preconceived ideas! Even better, I get a second opportunity to watch it next week, thanks to winning tickets from Defibrillator Theatre Company!

A Lie of the Mind plays at Southwark Playhouse until 27th May 2017.