May 02, 2017
Play-wise, April has been quite busy: Hamlet, Love In Idleness, The Goat, Othello, Arsenic and Old Lace, Gabriel, Rosencrantz and Guildenstern Are Dead, The Dumb Waiter and The Dock Brief...phew! But in spite of these distractions, I've also managed to get a bit of reading in (and some house work... but the less said about that the better!)

I ended March reading Sharon Bolton's third book in her Lacey Flint series, "Like This For Ever" and I was going to start April with the fourth installment, however, I got side tracked by a book that a friend bought for me. She was interested to see what my take on it was. 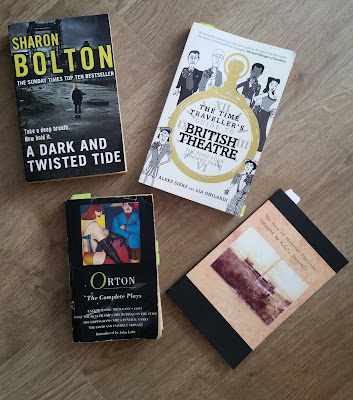 Now I love a good crime/mystery novel. The darker and more twisted the better! From the Famous Five and Nancy Drew, to Agatha Christie and Sherlock Holmes, my childhood was never devoid of a good mystery to solve and questionable characters to think about. As an adult I've enjoyed being swept away to Venice with Commiserio Brunetti, to the darker side of Victorian Britain with Ann Granger novels. Somehow, I've even read (and enjoyed) the private detective series by Robert Galbraith. (I won't lie, there is no way in the world that I would have read the books unless I'd been speaking to Tom Burke about them. He obviously knows me better than I know myself and he didn't seem at all surprised when a couple of weeks later I confessed nosiness had got the better of me - I'd read them.)

How Powerful Can the Mind Be? 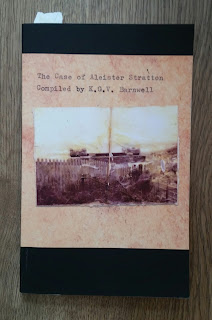 The book my friend bought for me was The Case of Aleister Stratton - Compiled by K.G.V Barnwell. I was instantly intrigued the moment I saw the cover with its old fashioned typewritten font. Before opening the pages I was reminded of the occultist Aleister Crowley, due to the unusual spelling of the name, so I was anticipating a dark, twisted tale, and that, I am pleased to say is what I got. The premis of the story is what it would be like to wake up one morning, believing that you have committed a murder. Is it a dream, or is it reality? The mind is a powerful organ, but just how powerful can it be?

Little touches such as the novella being "compiled" rather than "written by" appealed to my strange sense of nostalgia. (My friend once called me a Victorian throwback because I told her that tea comes from a teapot, NOT a Tassimo!)

The Case of Aleister Stratton is something of a revelation. I've not read anything like it before.  Kate Barnwell is known for her poetry, and that is clearly evident in her prose. This is a novella full of poetic imagery; you get swept away with words which create a painting in the mind. Maybe I enjoyed the tale because it appealed to my antiquated sensibilities, the words painted a bygone Edwardian era. The details and imagery of the mother's bedroom were exquisite, you were transported into the room, as though you, the reader, were actually walking around in it. You could imagine being able to pick things up from the bedside table. I half expected Sherlock Holmes to appear to tell me the game was afoot!

"Something has been done, but not as I thought" 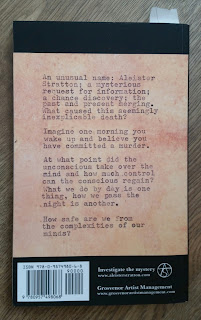 Aleister believes he has killed his mother and his sister, he confides his dreadful crime to a professor of English Literature, turning the poor man's life upside down. It is compelling reading. Are we voyeurs of a horrific crime, or are we just seeing into someone's vivid imagination? This drifting between Aleister's conscious and unconscious mind makes intriguing and compulsive reading. This is no ordinary crime novel. It mixes the Kafkaesque disturbed mind with the eloquent language of Edgar Allen Poe. It looks at the darker side of life, the bleakness of human nature, questioning why we do the things we do, whilst interweaving the beauty and complexities of the English language.

This is a book which warrants the readers attention, so curl up in your favourite chair and be transported to a bygone age. Once you have picked the book up, you won't be able to put it back down.

I managed to got side tracked again as I had promised to see a friend in Arsenic and Old Lace. I decided I'd better read the script before going to watch it. Funnily enough, even between those pages I still couldn't escape a murder or two!  Finally I got myself back on track and read the fourth Lacey Flint novel. I heartily recommend Sharon Bolton's crime novels, they leave you gripped at the turn of each page. Each chapter flits between Lacey, the various crimes that are committed, and the various personalities that she comes across. The books take us to various haunts around London, and it's interesting when a street or area is mentioned and you recognise it. When you next walk down the street, you start seeing things from a new point of view. I love Lacey's feisty yet damaged character, and I hope that there will be more tales for her to tell in the future, especially as in the last novel her past is beginning to unravel. For the time being though, I'll have to concentrate on clearing the bookcase of the pile of other unread novels that I have calling to me. 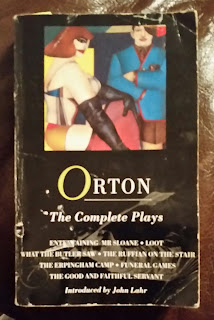 I'd started trying to read The Complete Plays by Joe Orton a few weeks after listening to the BBC Radio 3 drama The Visa Affair starring Tom Burke and Russell Tovey, but I made the mistake of reading the book in order! The introduction about Joe Orton's life was interesting, but his first play The Ruffian on the Stair seemed to go nowhere. It ended rather abruptly. I found I was wanting more, in need of some sort of explanation. I felt a bit cheated and bored and so the book got cast aside. I suddenly took a notion to pick it up again, however, this time I flicked through and landed on a play called Loot. This was far superior. I was laughing out loud at the absurdity of it all and really, it was no laughing matter. It is a play of many depths, a bit like its writer, and it allowed me to venture further into the trademark world of Orton and the complexities of relationships. Having given the book a second chance I decided that he was another playwright to add to my list of "must see" plays. I don't know if serendipity struck me again, but a few days later it was announced that Loot is being performed in the summer. I immediately bought a ticket, that is one play I'm not going to miss! 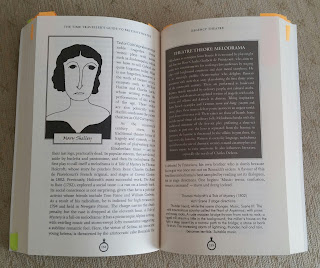 Finally it was time for a history lesson. Whilst down in London watching plays, I always end up in The National Theatre bookshop...let's face it, the last thing I really need is anymore books, I have a huge pile to read, but this one sang out to me - The Time Traveller's Guide to British Theatre. Now I am hopeless at history. I can't remember dates or people's names and my history teachers were as dull as ditchwater, but I do find the past a fascinating place. This is not the book for your serious historian, this is a lighthearted review of the last 400 years of British theatre. Each era has a guide showing us around, it is written in the style of a tourism guide, and it gives some interesting incites into the world of Shakespeare, the rivalry of theatre companies, the evolving audiences and the styles of play written for them. As you are guided around Britain, there are resumes of some of our more prolific playwrights and snippets of reviews from newspapers. I really hope that an audible version of this book is recorded in the future, as it is the perfect thing to listen to in the car, or whilst relaxing in bed when your eyes are too tired to focus on the pages!