Not About Heroes – Theatr Clwyd - Mold 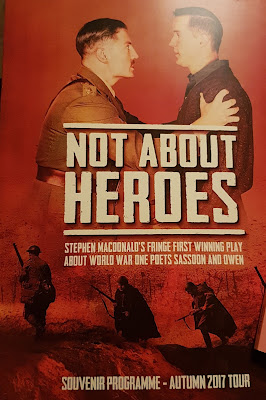 Britain declared war on Germany on 4th August 1914. Germany had ignored Britain’s request to stop violating Belgium’s neutrality in its attack against France. The bloodiest battle in history was about to commence. The casualties of WWI far surpassed those of WWII. It wiped out generations of young men, men who had everything to live for, many of whom had such bright futures ahead of them. No-one could prepare themselves for what was about to become. No-one could envisage the horrors of “modern” warfare. Britain was living in the glorious Georgian age of poetry, a soft and meditative state of romanticism. Their perception of war was still one of cavalry charges and heroics for the greater good. How innocent they all were. The brutality of trench warfare was an unknown quantity, but the poets who were prepared to speak out about their experiences would soon change all of that. Even the likes of Edward Thomas who waxed lyrically about the beauty of the English countryside and the world around him would start to write poetry of a darker, bleaker nature, once he took to the trenches, no doubt spurred on by the thought of impending death.

Siegfried Sassoon (so named because his mother loved Wagner’s opera’s rather than German ancestry) was blessed to come from a wealthy family. It meant he had a private income so that he could divide his time between that of a country gentleman, and a London literary lover. His world was a far cry from the trenches that he would soon find himself ensconced him. Despite his privileged background, Sassoon was noted for being a courageous, if not almost “mad” fighter. His bravado earnt him the Military Cross, however his acts of bravado led to him being hit by a snipers bullet in 1917. He was moved from the trenches back to England to recover, but it was here that he started to have different thoughts about the war. He made a public statement to his commanding officer "…as an act of wilful defiance of military authority, because I believe that the war is being deliberately prolonged by those who have the power to stop it…” He wanted to be court martialled – instead he was sent to Craiglockhart War Hospital in Edinburgh to recuperate from neurasthenia. The Military Cross he had earnt had been thrown into the River Mersey, not as an act of some symbolic statement against the war, but as something to get him out of his black mood.

As a poet, Sassoon employed the use of direct speech so often used by Thomas Hardy in his novels. He held responsible the church, the army and the government for the murder of so many young men who had their whole lives yet ahead of them. Despite his hatred of war, Sassoon felt he needed to see action again, and so he returned back to the front, to the place he had last been posted. But upon his return he was dismayed to find that, despite the enormous amount of bloodshed, nothing had changed. Men were still losing their lives, but for what? 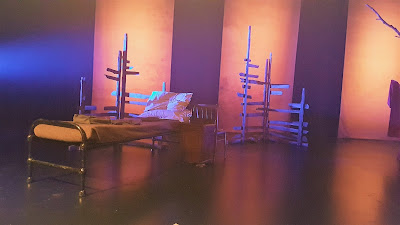 Wilfred Owen could be viewed as Sassoon’s young protégé! Brought up in Shropshire, the son of a railwayman, he finished school and took up employment as a lay assistant to a country vicar. Owen became critical of the church, he could see the difficulties that were faced by society and was dissatisfied with how matters were dealt with; he left his post and moved to France to teach English. Whilst Owen may not have believed in the practices of the church, he still believed in Christian teachings and so it was with great difficulty that he made up his mind to finally enlist, a year after the war had started. Within five months of active service, he was diagnosed with “shell-shock” and sent to Craiglockhart War Hospital. This is where he would meet his idol, Siegfried Sassoon. 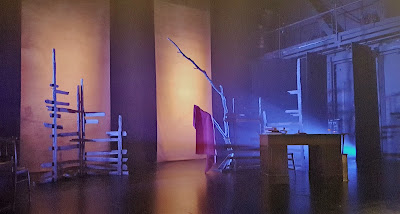 Not About Hereos by Stephen Macdonald tells the tale of their blossoming friendship. Whilst the narrative is fictional, it is based on the letters and memoirs of Owen and Sassoon. Their close friendship led the aspiring poet, Owen, to be taught by the master, Sassoon, to hone his craft and create some of literature's most poignant poetry. Owen’s poetry haunts the soul, but although I’ve read it many times, it is often still just words on paper. Whilst I could empathise with the horrors he had seen, Owen himself was still a two dimensional character to me. Reading Not About Heroes started to bring both characters to life and their poetry started to become more defined. I could finally start to see the people, the flesh and blood behind those verses. Having read the script beforehand, I thought I would get a little emotional watching; but nothing prepared me for the superbly moving performances in this two-hander play between Daniel Llewellyn-Williams and Iestyn Arwel as they brought these two great men to life before my eyes.

With Sassoon’s assistance, Owen became skilled in the use of alliteration, half-rhymes and the creator of pararhymes to reinforce his themes of dissonance. He wrote eloquent verses about the tragedy of young men being killed in battle, the irony being, in order for him to believe he could be a war poet he felt he had to endure the battlefield again, and so he returned to the front only to be killed by German machine gun fire one week before the war ended. He was only 25 years old. He had become the subject of his poems. The voice of a generation gunned down, another statistic of young men who would never be allowed to fulfil their destiny – their hopes cut short by the ravages of war.

No-one will ever know what private nightmares soldiers endured either at war or at Criaglockhart, but this play allows us a small window into what was happening a hundred years ago. It is an intimate portrayal of a close friendship that grew because of a shared experience of war and a love of poetry. Flying Bridge Theatre Company has produced a compelling and deeply moving production which recognises the sacrifices made during WWI. It might be about the horrors of war, but it also shows the beauty of poetry and the truth contained therein from the people with experience. It is a play for engaging the audience into the drama of two people’s viewpoints of a war in which they found themselves immersed; it serves as a reminder that WWI was especially harsh and should not be romanticised like a Georgian poem. It should be remembered that Sassoon himself went from writing about the patriotism and optimism of going into war, to the horror and reality of war, the shock and the anger of the trenches, and an aftermath which we cannot even begin to comprehend. It is a play which will engage you, but it is the spoken words of Owen that will leave the greatest impression.

I was blessed to see this play. Unfortunately the tour of the play ends on Saturday 11th November, the date when we remember all that have fought for us, not just those from WWI. I do hope that Flying Bridge Theatre Company will take Not About Heroes back on tour again next year, those who haven't seen have genuinely missed out.