November 04, 2017
Theatre is the gift that just keeps giving. It informs you, it educates you and it entertains you.

Friedrich Schiller – 10th November 1759 – 9th May 1805, was a famous German playwright, poet and philosopher. He was of great importance and influence in European theatres; however, he has never become mainstream, and still remains relatively unknown in the UK. He had a grammar school education until the age of 13, when he was commanded to go to the Military Academy, an institution founded by Duke Karl Eugen. Schiller learnt in his formative years what it was like to grow up under the rule of a petty tyrant who used and abused his power, and this theme echoes through many of Schiller’s plays.


Robert David MacDonald (David) 1929 – 2004 was fluent in eight languages (and it is noted could ‘get by’ in 22!) He was a Scottish musician, playwright, actor, director, and he translated five of Schiller’s plays, introducing this influential writer to a new wave of actors and audiences. It was because of David’s idiomatic translations that Schiller became more accessible to the masses. He became the co-artistic director of the Citizens Theatre (or Citz as it is affectionately known) in Glasgow in 1971, a theatre that helped with the careers of some of our best known actors: Celia Imrie, Mark Rylance, Sian Thomas, Alan Rickman, Glenda Jackson, Peter Guinness…the list goes on and on!

The Faction are currently hosting a festival celebrating the genius of Schiller between 31st October 2017 – 11th November 2017 at The Bunker Theatre, London. There will be a series of talks, performances and readings by The Faction’s ensemble in collaboration with guest DJs, singers, actors and academics, to showcase through theatre, poetry and opera, the revolutionary spirit of Schiller’s work.

I hang my head in shame. I had never heard of Schiller before, and if it wasn’t for Tom Burke, I still wouldn’t know about either of the extraordinary men that were celebrated during the evening’s events. I saw a tweet five days before the event, confirming that Tom was going to be hosting a Q&A about William Tell at The Bunker, a small theatre that was formerly an underground carpark!

Fortunately the stars were aligned; I would already be in London but due to go back home the night of the performance, so it was just a case of sweet talking my boss into another day off work, persuading Virgin to change my train ticket without bankrupting me, and then finding a hotel for the night. I didn’t really need to say much to my boss, as soon as he answered the  ‘phone he realised a “Tom emergency” was approaching, and so everything fell into place for a night out in this dark and unique 110 seat studio style theatre. After Mark Leipacher (Artistic Director of The Faction) introduced the evening by saying he expected about 90% of the audience to have never heard of Schiller, my head lifted slightly…I wasn’t sure I’d heard right, but I was happy to accept that statistic! 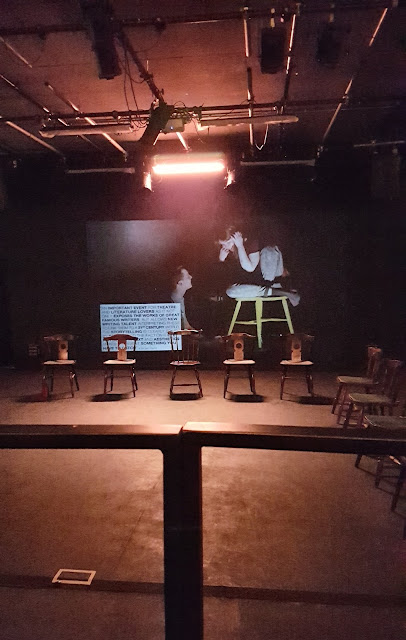 The stage was set. 13 chairs were lined up on three sides of the square stage for the actors to sit and read through David’s translation of Schiller’s version of the classic folktale William Tell. In the short time available, I’d bought a copy of William Tell and read it on the train to London. I wanted a vague notion of what to expect on the night. It was a beautifully written tale, with a poetic, almost lyrical quality to it, but I’d not been able to buy David’s version in so short a time. I was looking forward to hearing how his version would sound as it was brought to life by the talented cast of actors, and finding out who would be playing each character.

When I read the play, I could visualise it being brought to life on stage. I mentioned this to Tom later, but I don’t think he took on board my subtle hint! As I perused the cast list I noticed Owen Teale would play the part of William Tell. I was thrilled. I’ve had a soft spot for him ever since I bunked off school one day and saw him sat in my local pub. (He was filming Robin Hood in Frodsham where I grew up and he was sat having a quiet drink with other cast members. He was the only person I recognised and who I asked for an autograph - which nearly 30 years later I still have!)

I was transfixed throughout the entire read through, paying attention to each actor as they played their parts with such depth of feeling. Tom only had a few minor roles, which being Tom he put great thought into, using different accents for his different roles, but this was not a night about Tom. Sure, it was his name that enticed me along to see what was going on, but as I sat and watched the story unfold, and felt the intensity of the play rising, there were moments I forgot he was sat just a few feet in front of me. Apparently the play overran. I didn’t notice. Even though I was only watching an extraordinarily talented group of people sit on chairs, or casually stand up, and read their parts, I was mesmerised. They deserved their applause by the end, they were truly enchanting. 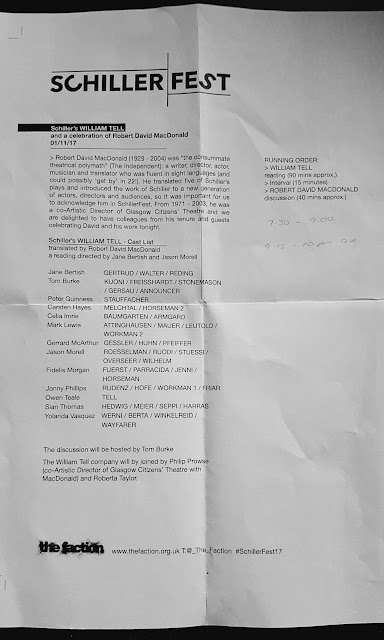 There was a short comfort break before a Q&A session, led by Tom, started. I hadn’t kept track of time, but apparently the Q&A was supposed to finish at 10pm. I was told it actually started at 10:10!(One day I may buy myself a watch to check such matters - but it showed that time does fly when you're enjoying yourself!) During the break I sat chatting to one of my friends as a) It was nice to catch up with her as it had been far too long, and b) I’m bone idle and couldn’t be bothered getting up! As I cast my eyes around the theatre, I saw Tom and a few others had come back out and were settling down for the Q&A session. Tom glanced over, smiled, gave a “thumbs up” and mouthed “thank you for coming.” He then gestured that he’d pop over later to say hello. It was a lovely indicator that he'd both recognised and remembered who I was. It had been about 13 months since I last spoke to him and he’s a very busy man, so it was a delight to be remembered with what appeared to be genuine affection.

Tom introduced the Q&A. As well as the actors who had performed that evening, Philip Prowse, who had been co-Artistic Director of Glasgow Citizen’s Theatre with MacDonald, and actor Roberta Taylor joined the line-up. Tom gave a brief background history about MacDonald to the audience, and advised he wouldn’t be saying much because he neither knew, nor had worked with David. He also confirmed that there were a couple of actors, including Owen Teale, in the night’s performance that were also ‘honorary’ members, not having worked with David either! The Q&A quickly dissolved into an evening of reminiscing about the past.  It was delight to be a part of. I suddenly felt as though I’d been whisked away to a thespians dinner party, and I was a fly on the wall listening to the gloriously funny anecdotes of the past. As the stories flowed thick and fast, it became an evening to be privileged to have been a part of. David was recognised as an amazing interpreter, who not only could speak various languages, but he understood the cadences of those languages. They weren’t just words, but words with emotional attachments, and that was why his plays worked so well. He was revered at home and abroad, he put Italian plays on in Italy…as Philip Prowse said, imagine, it would be like an Italian bringing Shakespeare to Stratford!

It was obvious that those who had the honour of working with him obviously held a great admiration and affection for him. Some of the actresses gushed about what a gorgeous man he was, and how they had been totally in love with him (at this point I did steal a surreptitious glance at Tom to see his reaction!) And that was the mood of the evening, not overtly sentimental, but fun, and a sharing of “secrets.” I couldn’t stop laughing as various actors told stories about different plays and Sian Thomas kept piping up “I was in that.” And then a little bit later… "I was in that too. I was very good." Cue for lots of raucous laughter!!! 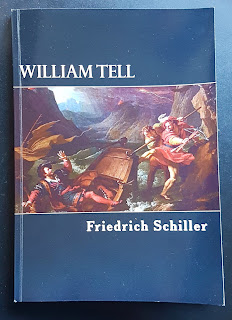 The evening was a fabulous concept, when Tom came over for a chat later I asked him if the whole concept had been his idea. As understated as ever, he confirmed that he was a fan of Schiller and had been approached by The Faction, but that the hard work had really been done by the rest of the actors. Well, whoever was to blame, I told him it was a great idea and a fantastically enjoyable evening. None of the actors fled off straight away; most milled about and then drifted one by one off into the night, allowing those audience members who had stayed a brief opportunity to speak to them. Peter Guinness was particularly chatty, sharing a memory of David which opened up some of the mystery of the theatre. He was doing a play which had a particularly long telephone conversation in it, and Peter was finding it hard to remember his lines. David suggested a large telephone diary by the 'phone with the lines written on it as a prop, so that Peter could flick through the pages if necessary. It worked. Having that comfort blanket meant that he remembered his lines…a good thing too, because David was a bit of a practical joker and had added some choice lines to the book which were not to be read aloud!

It was the most magical evening. The Faction and Tom Burke should be proud that they got together to bring the idea alive. The actors involved need to be thanked for putting on a brilliant performance of William Tell…a play that was never performed in David’s lifetime, and for being so open afterwards when sharing their experiences of their time at Glasgow Citizens’ Theatre. And finally The Bunker needs to be thanked for staging it; a strange but wonderful little venue that I felt very much at home in. If the truth be told, you can give me an intimate gig in a dark and gloomy “carpark” instead of a classically staged west end production any day of the week! Both may hold a place in my heart…but I know where I’d really rather be!

Schillerfest continues at The Bunker until 11th November 2017. If you live near London, go and watch/support some of the events there. Sadly I don’t…so I’m just going to curl up with a cup of tea and my book of Schiller’s Short Stories (and then if the postman ever arrives, I can also catch up on the various Schiller plays that MacDonald translated. See, didn't I say theater educates you!)