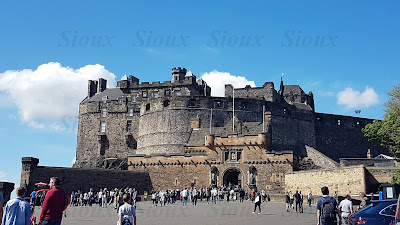 I’m driving from Flintshire to Edinburgh to see a play. It’s a bit of a way to go just for a play, so I figured that I should turn the trip into a long weekend away with a likeminded soul. My friend Nikki is a theatre fan, a great photographer and interested in ornithology, so we got our heads together  and booked tickets for the last night of Creditors by August Strindberg at The Lyceum Theatre. Nine months lay ahead to decide and plan where we were going with our cameras!

The play was scheduled for the 12th May and on the 1st May we realised there was still no timetable set as to what the hell we were doing. Another friend had leapt in to save the day (we could stay at her house) and as I seem to have no time for anything at the moment (hence lack of/late  blog posts) I just relied on Nikki who was more on the ball than I, and had heard about a Red Kite trail in Galloway. We had been toying with the idea of watching Kites in Wales, (and yes I haven’t got around to organising that either) so that idea got a big tick straightaway! An even bigger tick was when she asked if I thought we’d be able to get to Wigtown. “Wigtown is full of books Nikki…of course we can make it!”

“How about lunch at The Witchery on Saturday?” “Oh my God woman, you’re on fire! That sounds amazing – just my kind of place…and I can wear my cat boots. Very witch like!!!” “Have you any ideas what you want to do, I feel like I’m hijacking the holiday?” “Nope, it’s all sounding perfect but I’ll get my thinking cap on.” I didn’t. The only effort I can honestly say I put in was buying lots of gluten free goodies and Prosecco…but every girl needs Prosecco, right?! 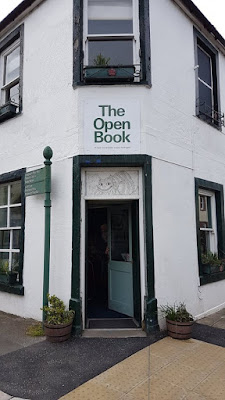 After a long cross country drive we arrived in Wigtown on a grey and gloomy morning. We headed towards our first bookshop and were approached by a chap carrying sound recording equipment. Turns out he was from Radio 4 and needed an audience in the book shop. It didn’t seem an onerous task so we went in. A band (made up of one male and one female) were playing songs about books, they were brilliant and it was easy to get involved with cheering and clapping for the radio listeners…however, what we were not prepared for was to be interviewed afterwards. Harvard University president Charles W. Eliot, had stated that all the elements of an education could be obtained by reading from a collection of books that could fit on a five-foot shelf. The question was set, what books would we put on the bookshelf?

Now, I read quite a bit, but to be asked whether I’d had a favourite textbook at school was a bit of a curveball which left me dumbfounded. I can’t remember textbooks at school, let alone a favourite one. I could only just about remember Longmans Audio Visual but seeing as my French is dire that was hardly something to put forward. As I scratched around the farthest reaches of my brain it occurred to me that I must have been asleep for most of my years as a student; the only textbook I could remember was my Norton Anthology of English Literature…and that’s only because I still dip in and out of it. I finally recorded some arty reply about a book that had a profound effect on me, but don’t hold your breath that I’ll make the radio cut. (I wouldn’t broadcast it if I were in charge.)
As Nikki and I headed off for lunch (Cauliflower Cheese soup – it sounds disgusting and we told the waitress so, only we found out it’s quite a taste sensation and we wanted the recipe) we laughed at how the morning had panned out.

I love nature and the opportunity to shoot raptors on the wing (with a camera!) was just too appealing. I dug out my Cannon EOS 700D and mourned the loss of my my favourite 500mm "wildlife" lens which somehow had grown fungus inside it (don’t ask) so I was reduced to a 300mm lens for trying to get some shots of the kites with. I didn’t think I would get any decent shots at all. I thought if I was lucky I might get the odd blurred shot of a bird, or more probably a load of indistinct tail shots; however, when I was finally brave enough to look at the results on my computer, I was pleased to see that there were a number of shots to be proud of, especially as I'm more familiar with taking still shots. I’m not going to become Chris Packham overnight, but I thought for a first attempt I had something positive to work with and improve upon! 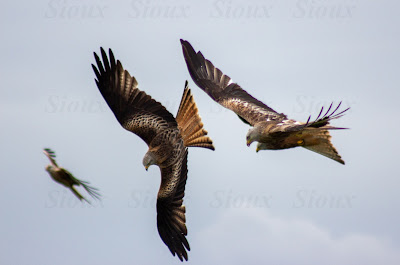 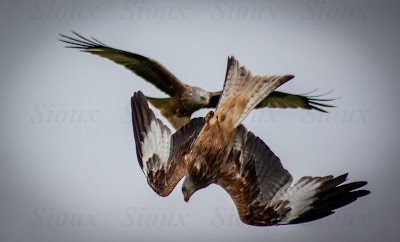 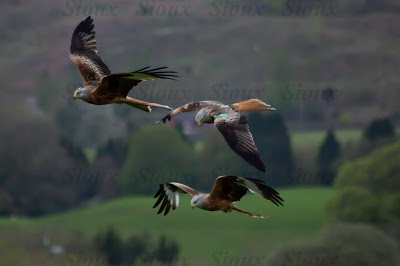 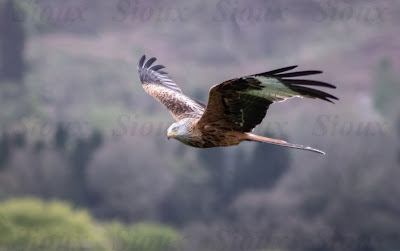 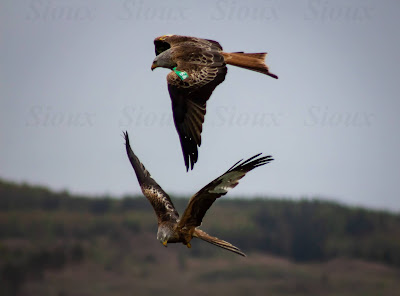 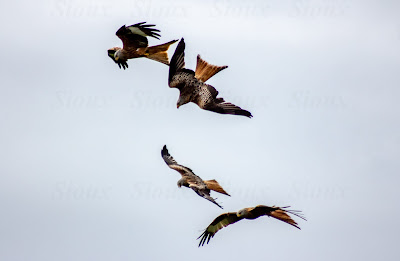 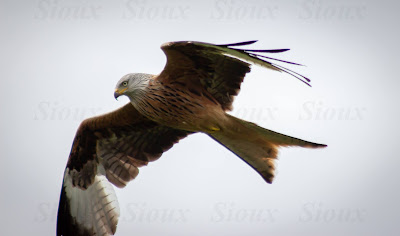 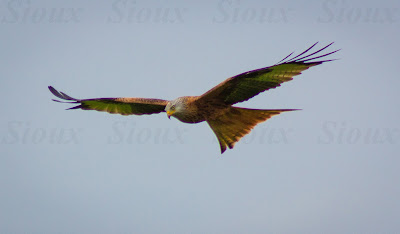 When we arrived at Bellymack Hill Farm, it was feeding time. We’d just missed the start due to our inability to negotiate either road signs or the ubiquitous SatNav that sends you where it wants to go and not where you think you’ve programmed it to go. As we raced to the back of the car to grab our camera’s, the air above was dark with the wingspans of dozens of Kites circling around. We raced to the viewing platform, throwing admission money at a bemused lady behind the counter on the way, and grabbed a spot to watch these majestic creatures in action. Red Kites have faced persecution in the UK, nearly dying out, but they have successfully been re-introduced back into parts of Scotland, England and Wales and they are now thriving. The Kites at Galloway were reintroduced back in 2001, and it was a joy to watch these gregarious birds swoop down, talons outstretched to grab meat from a large platform, and rise on the updrafts for others to take their turn.

Whilst it could be argued that this isn’t really watching the birds in their natural environment, it does give you an opportunity to get up close and see how beautiful these extraordinary creatures are. 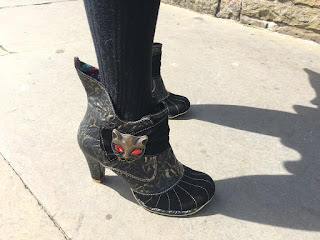 The day we’ve been waiting nine months for! The sun was beating down; I was carrying a leather jacket and starting to wish I’d left it at home, the shops were calling and a castle needed visiting. So of course we headed off for Lunch at The Witchery. Let’s be honest, you can’t do anything on an empty stomach. I wore my Gothic-esque cat boots as I thought they would be rather fitting, and I sat in amazement soaking in the gorgeous dark wooden interior of the restaurant. The waiters were welcoming and made the experience incredibly relaxed and the food was sensational. Nothing was too much trouble, even when there was a Pescatarian and a Gluten Free diet to take care of!  I heartily recommend anyone visiting Edinburgh to book a table there. OK, it’s a little bit pricey, but it’s a Michelin starred restaurant and well worth every penny for the full dining experience. 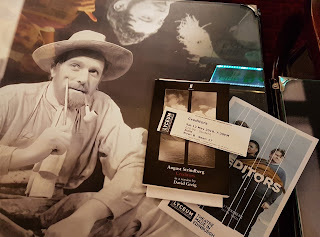 This play was drawn to my attention because in 2009, Tom Burke won the prestigious Ian Charleson award for his performance as Adolf in a production directed by Alan Rickman. Not only did it feature Tom in the cast, but another favourite of mine, Owen Teale and the utterly brilliant Anna Chancellor. It has always been a regret that I didn’t get to see that particular production, so I was thrilled to be able to watch it this time around.

Free-thinking women are a danger to society and it is best to show who is in control from the start. Of course, Gustav’s views are not because he has a vested interest in his ex-wife, but just a reasonable viewpoint that men should consider for the benefit of all society.

Strindberg’s play is a raw and brutal look at the ease in which someone can be manipulated into questioning both themselves and those that surround them. Tekla, and her younger second husband Adolf are on holiday at a seaside resort, when Tekla spends a day away from Adolf he is befriended by a stranger, Gustav. Adolf is both full of youth and optimism, but prone to moments of dark thought and his ease at offloading his worries to this stranger makes it easier for Gustav to manipulate and impress on Adolf that his fears are not unwarranted. It is only as the play unfolds that we see Gustav has more at stake than just giving friendly advice to Adolf. 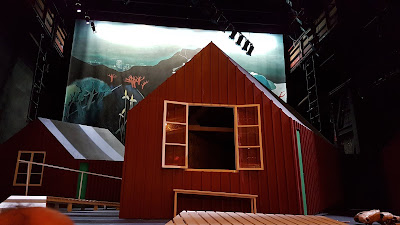 This was a superb production by Stewart Laing. I particularly liked the scene breaks where by a group of silent Girl Guides robotically march on stage making fires, waving flags in semaphore, symbolically communicating with the audience in a strange but almost comforting manner which helps set the finally emotionally charged ending. The eerie music and the use of black and white live recording from inside Tekla’s beach home adds to the dramatic climax, as we bear witness to the relationship of all three parties, but from a distance, as we watch it played out on film. 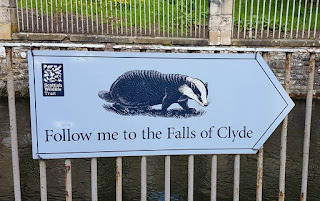 The final full day had us heading not far from our holiday home to the Falls of Clyde. Whilst there were various routes you could take, we decided on simply “following the badger signs” on a short walk along the River Clyde from the World Heritage Site which passes a series of waterfalls through a beautiful woodland setting. We returned the way we came, however, if you have the time and energy, the walk can be extended by returning via the opposite side of the river in a more circuitous ramble. 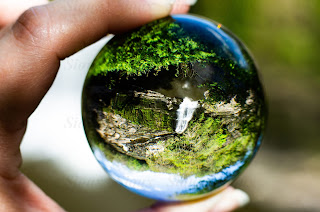 The reserve is home to over 100 species of birds, including kingfishers, yellowhammers, spotted flycatchers and ravens.  In the evenings Daubenton’s bats swoop over the river to catch their supper, whilst otters play along the riverbanks and badgers start foraging in the undergrowth for juicy earthworms and other tasty treats. If the wildlife isn’t playing, there are still the scenic woodland walks, carpeted with bluebells in the spring, and if it’s been raining, spectacular waterfalls to view en route, including the impressive Corra Linn, standing at 80ft high. 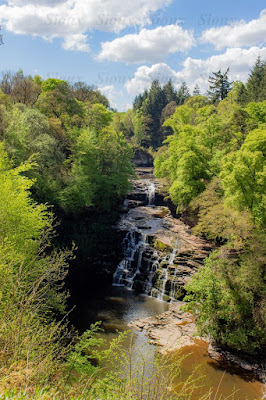 After a day out rambling, ensure you leave enough time to pop into the visitor centre for some locally inspired crafts in the gift shop and a tasty ice-cream. I heartily recommend the Irn-Bru ice-cream as a break from the normal vanilla!