The Turn of The Screw (Theatr Clwyd) - and a Brilliant Bank Holiday!


A Bank Holiday filled with sunshine! Well that’s a first! Despite “Derek The Weatherman” promising a nice break I didn’t believe him, so I was caught somewhat by surprise. I thought I’d enjoy some R and R in the garden before realising that a) the garden didn’t exist – instead a patch of overgrown wasteland had been deposited outside my back door, and b) the garden parasol had been left out all winter, the wooden pole had rotted through, and the remains of spiders, flies and god knows what showered on my head as I tried to open it up. Having lost the cat in foot long grass, which I swear at one time had served as a lawn, the restful weekend turned into locating a machete and making the place look like it’s inhabited.

Radio 4 has turned into my Godsend these last few days, there were several plays I popped on as I set to work in the blistering heat. The ground has been cleared of weeds, not sure the frog was too happy about that, but I found room to leave him and the local hedgehog a large shallow dish of water in a shady spot near the back of the shed, so I suspect I’ll be forgiven.

The patio has been cleared of weeds and jet washed and is now ready for the summer pots to be planted up…although they’re in the greenhouse and that seems to have become a dumping ground for all the rubbish I brought back with me when I vacated my allotment. That’ll be the next Bank Holiday’s job then!

So after all that hard work, I felt I had earned a new patio brolly, so having bought some tropical parrot cushions for the chairs, it seemed a subtle lime green parasol was the way to go! So, just as the Bank Holiday is waving goodbye, and work come beckoning, I’m ready to sit in the garden with a G&T Popsicle and start writing about what I’ve been up to regarding theatre land.

The Turn of the Screw – Henry James (Theatr Clwyd) 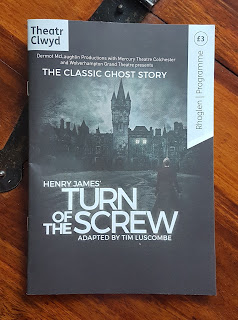 The classic ghost story brought to life by Daniel Buckroyd, tells the tale of a governess in 1840 who agrees to look after two orphaned children. Shortly after arriving at the country house in Bly, the governess sees the image of a man and a woman who she later finds out are former employees at Bly, now deceased. The governess feels compelled to do everything she can to keep the children in her care safe, but at what cost?


Why I am drawn to ghost stories is anyone’s guess, but they are an intrinsic part of our literary heritage. From Hamlet to Jane Eyre; Green Tea to The Woman in White, the UK is richly furnished with tales of ghostly goings on. There is something strangely comforting about sitting in a darkened theatre having the wits scared from you, to breathing a sigh of relief when the lights come on and we are back in the normal world.< The Turn of the Screw is a disturbing tale and ambiguous in that one cannot be sure whether the ghosts are real or not. The tale has inspired many writers including Susan Hill – the image of a woman in black and a chair that rocks on its own – are both elements borrowed for her own famous tale, The Woman in Black. 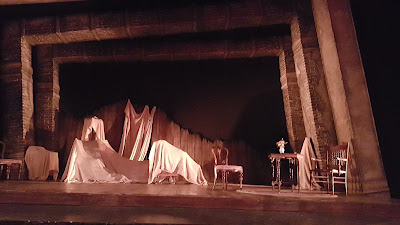 What I really loved about this version was that whilst it stuck pretty close to the original book, I left the theatre pondering what had really happened. Tim Luscombe’s adaptation picks apart all the contradictions in James’ book, giving a layered production which takes the now grown up orphan Flora (played by Annabel Smith as both the adult and child) to question the governess about what had happened to her and her brother during her childhood years.

I had taken the book at face value, just a ghostly tale, had the governess seen the ghosts or were they just a figment of her imagination? Admittedly I had read the book quickly, but I hadn’t really given any thought as to the actual state of mind of the governess. Was this the mind-set of a sexually repressed governess, or a woman suffering from depression, or was some deeper Freudian thinking necessary? Carli Norris’ knock out performance changed my thoughts on the book and gave me some deeper, complex, food for thought. I drove home seriously questioning those ghosts, were they real or not?! I think another, considered, reading of the text is probably in order! 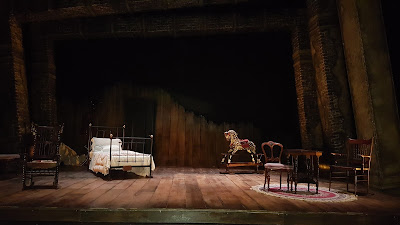