I was chatting to someone recently…they thought I read a lot; this amused me as I don’t think I read much more than most people. They also pointed out that once upon a time, if I read a book I thought people would find interesting, I shared it here on my blog and I should consider doing that again. Apparently, it had helped them pick some books that they would never usually consider, and they had really enjoyed them. So that was a nice thing to say...and so here I am with a bit of a book blurb!

I’ve been eagerly anticipating the fourth instalment of the Cormoran Strike novels; I wanted to know what happened next in Strike and Robin’s journey. I picked the book up on its day of release and started reading. By day two it was finished and I tweeted I had enjoyed it but thought it a bit long-winded. The reaction was mainly surprise that I’d finished it, rather than the “how dare you say anything against JKR” but I think that was possibly more to do with the fact that most people were still reading the book at the time. Now they’d probably turn on me and say it was the perfect length! 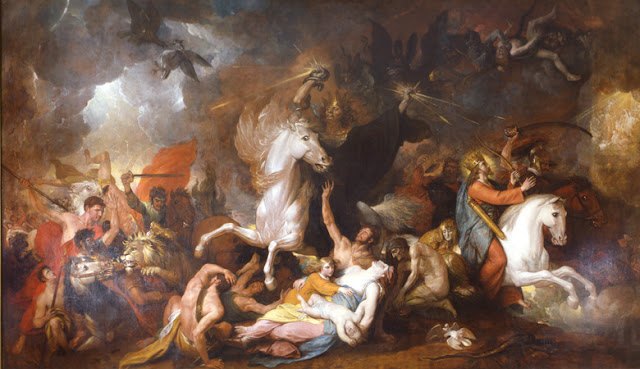 Before the book was released, Robert Galbraith/J K Rowling posted various teasers on Twitter, from headers showing a wooden anatomical horse (which artists use for form and perspective when drawing) Benjamin West’s painting “Death on a Pale Horse” a reference to the biblical passage from Revelation “And I looked, and behold a pale horse: and his name that sat on him was death,” to a picture of a USB stick in the shape of a white horse announcing the book was finished. All of these pictures made me think Lethal White would be set within the confines of the equestrian world. I was rather excited, as a child I had an encyclopaedic knowledge of all things equestrian; if I couldn’t have a horse as a child, I would damned well know all I could about them for when I’d grown up!

Overo lethal white syndrome is a fatal, inherited condition found in horse breeds with white coat patterns. It is probably most renowned in the American Paint Horse, but can also be found in miniature horses, Thoroughbred and part-Arab horses. The affected foals are born with a white (or nearly pure white) coat due to a lack of melanin-producing cells, plus an impaired intestinal tract. At birth they look like any normal white foal (not all whites foals are affected by OLWS by the way) however as the infected foals cannot digest food properly down the intestinal tract, once they start to drink the mare’s milk they start showing signs of severe colic. An affected foal can usually show signs within the first 12 hours of birth and death can occur with 48 hours as the abdomen distends and becomes increasingly painful. There is no cure for OLWS and so the kindest thing is for the foal to be euthanised. 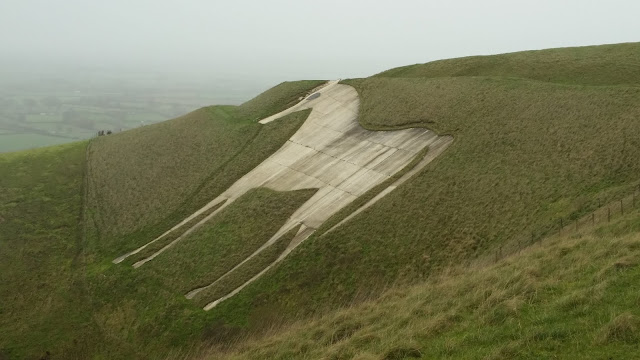 It seemed an odd title for a book, naming it after such a horrendous condition, but then the promotional excerpt about Lethal White came out…”I seen a kid killed…He strangled it, up by the horse.”  Hmmm. Nope. OK, so probably not a story set in the horse world at all…up by the horse could be anything. A pub (let’s face it, there are a lot of pubs called The White Horse) or perhaps a famous British landmark…a chalk horse (there are plenty of them cut into British hillsides…from the Kilburn White Horse in the North York Moors National Park, to the Westbury White Horse of Wiltshire and beyond.) There was only one way to find out…read it!

The first thing I noticed flicking through from cover to cover was that each chapter starts with an excerpt from Henrik Ibsen’s Rosmersholm.  Ibsen's politically biased play covering scandal, corruption and an unhappy marriage (the characters in the play being based on the real life elopement of a fiesty young countess who ran off with the husband of one her relatives, a Swedish poet, who were guests of Ibsen for a short period.) One of the themes in the play is the folklore of the White Horses of Rosmersholm.  The play was originally written under the title White Horses and later changed to Rosmersholm, so it was a tangible use of his work in her book.

Now I don’t intend to spoil the book for those who have not read it by writing spoilers. The book does start where we left off in the last one, at Robin’s wedding. Whilst there is no hard and fast rule as to how long a prologue should be, I think it should be limited to no more than five pages. It opens up a story, giving background details and context, and helps establish the story going forward. Now when I finished Career of Evil, I was desperate to know what happened between Robin, Strike and Matthew but I wasn’t expecting a warts and all start to the book. I read the (very) long prologue thinking, “well this is all very nice…but is this supposed to be romantic fiction or a detective novel…and when are we going to move onto the crime bit?” 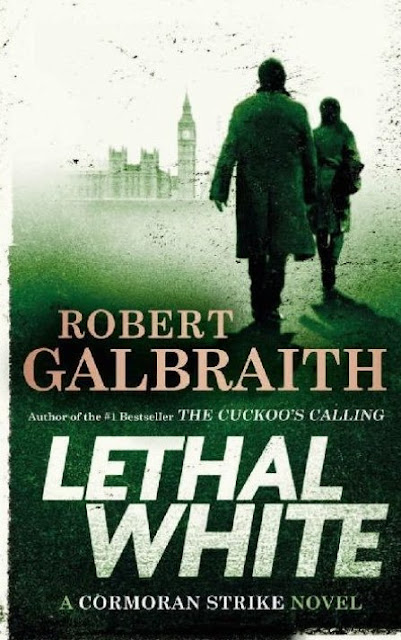 I guess the book relies on both the crime element, and the romantic notion of Strike and Robin’s relationship, but I thought it took too long for the book to really get started…it was a very slow burn and it wasn’t until I’d got to about the 24th or 25th chapter that I actually thought the book took off. Strike’s success in a Career of Evil has meant that his agency has grown and he is now able to employ some contract staff to assist him with investigations. He receives a visit from a young man, Billy Knight, who claims he witnessed a murder and the burial of someone when he was younger. He’s an agitated character with a history of mental illness, and he runs from Strike’s office before identifying himself. Strike however catches up with Billy’s brother Jimmy, an activist opposed to the up and coming 2012 London Olympics, who tells Strike his brother is an unreliable personality and not to be believed.

The meeting of Jimmy and Strike is noticed by Jasper Chiswell – the Minister for Culture – a politician plagued by scandal who, he tells Strike, is being blackmailed by Jimmy. Strike takes up the case and places Robin undercover at Westminster to find out what is going on behind closed doors. Robin, unsurprisingly, is not having the best of times with Matthew, and so is eager to accept her latest assignment. She meets a number of characters including Geraint Winn, the husband of the Minister for Sport (Della Winn) who wishes to destroy Jasper’s career…however, whilst undercover, Robin finds out that there are other things he’s guilty of! The plot weaves back and forth through a myriad of characters which we are introduced to in Rowling’s distinctly verbose style.

As the investigation continues, Strike is drawn to a painting, possibly painted by the Liverpool artist George Stubbs of a horse mourning the death of her foal (which has died of lethal white.) For my A-Level art exam I had to write a thesis, my subject was Equine Metamorphosis…looking at the changing face of the horse from Albrecht Durer to Franz Marc. As someone who had easy access to the Liverpool art galleries, George Stubbs featured a lot in my research, although I can’t ever remember seeing a painting matching the description in the book! But that is neither here nor there, JKR has done her research and embedded as many horse connotations into her book as possible.

By the end of the book I was full of mixed emotions. I enjoyed being reacquainted with Strike and Robin. JKR has created two beguiling characters that you can’t help falling in love with. I enjoy a good crime/detective novel, and in essence these books do have a skilfully weaved storyline but I just wish there was tighter editing. All characters, including incidental characters, are described in so much detail that the flow of the story wanes. I also got the feeling that JKR was distracted when writing the book, there is repetition in some areas and mistakes in others, and I found it unnecessary to keep describing Strike’s missing leg in so much detail so many times. We’re meant to believe that Strike is not defined by his injury, yet at every given opportunity a paragraph will be given to how he lost his leg. For an audience with the intellectual capabilities of processing a passage of Rosmersholm per chapter, the author should trust the same audience to remember (if you tell them once per novel) how Strike sustained his injury. As the story progresses it is perfectly acceptable to say the pain shot down Strike’s leg as an adequate reflection of when he is suffering, rather than the pain shot down Strike’s missing leg which he had sustained…blah blah blah. The constant reminders just irritated and distracted me. 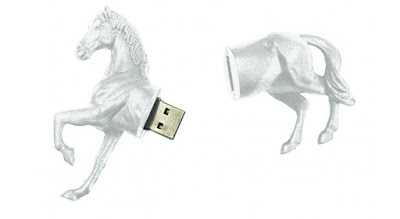 I think JKR is blessed with a vivid imagination and an ability to create a good story. She creates interesting, complex characters and has a great feel for the human psyche; she is also very visual and this translates well to film and TV, however her publisher really needs to be brave and cut the extraneous material. The various flaws (e.g. an item mysteriously changing into something else) should also be ironed out when proofreading because they stand out, particularly if you read the book over two days! (At one point in the book I was reminded of Tom Burke’s character, Norbert, in the short “One Wrong Word.” A novelist is trying to get his book published, but the text just isn’t quite right!)

Despite my grumbles, I did enjoy the book! I’m looking forward to the TV adaptation (Tom back on my telly…of course I’m looking forward to it!) and I have a great desire to find out what happens in the next stage of Robin and Strike’s journey. I just hope that we might get to see some more of Shanker in book 5…I do like him!