Or were we? As the tune rocked out and the audience jigged along in their seats, all the lights went out! As this was an Emma Rice production, you’d be forgiven for thinking that this was a part of the show. But several seconds later and a few quips from the actors, the audience realised that this was an ironic blip to what had been a highly charged and entertaining evening. 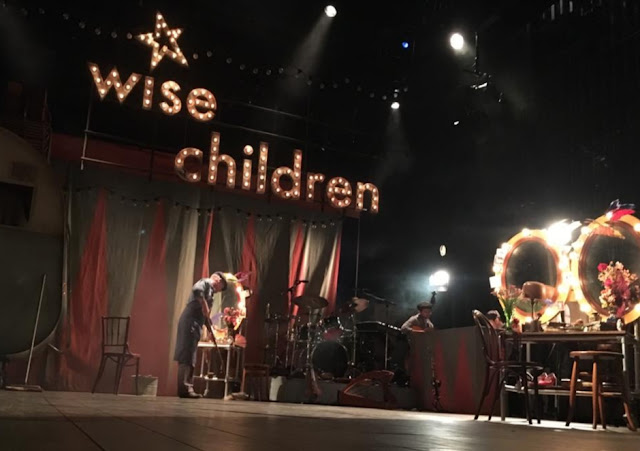 “Oh and we were just getting to the good bit!” quipped Gareth Snook – aka Dora Chance. A few minutes later, someone had obviously shoved 50p in the meter and the lights came back on…actors hurriedly rushed back to their places to carry on as though nothing had happened…and then the runaway caravan developed a mind of its own and nearly pushed poor Lady Atalanta who was sat in her wheelchair off the stage! I don’t know why I was giggling…I was in the front row and nearly had the cast sitting in my lap!

These technical glitches apart, Wise Children was a totally different theatrical experience to what I am used to. I always think that I’m not a fan of musicals…but then I can merrily rattle off a list of the musicals I’ve actually rather enjoyed. Whilst Wise Children is not advertised as a musical, there are a number of songs and routines throughout that keep the production moving at a high tempo. At the interval I said to my friend that it was a shame there wasn’t a soundtrack to buy as the cast sounded exquisite and there were occasions I found myself wanting to sing along (despite not knowing the lyrics!)

Wise Children is a book by the acclaimed novelist Angela Carter, it is also the name of the theatre company Emma Rice created upon her well-publicised departure from The Globe in London. Shakespeare purists lamented her appointment and proclaimed she had destroyed Shakespeare. I can’t possibly comment. I have never seen a play performed at The Globe and I’m most definitely not a purist when it comes to Shakespeare. In fact, the only times I’ve ever truly enjoyed his work have been when actors and directors have stepped outside the box and put a new spin on it (Andrew Scott in Hamlet being a perfect example of this!)
Some might have thought Emma Rice would disappear without trace from this “fall from grace,” but in Wise Children she has shown herself to be innovative, brave, bold and an obvious lover of the late Angela Carter, who herself was not one for sticking with tradition.

“Happy Birthday to us. We used to be song and dance girls.” 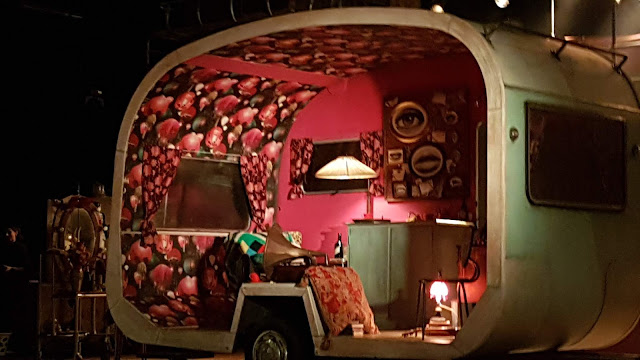 Wise Children could be regarded as a love letter to the theatre. It is April 23rd, Shakespeare’s birthday, and in Brixton twins Nora and Dora Chance (Etta Murfitt and Gareth Snook) and celebrating their 70th birthday. They have been invited to their father’s 100th birthday party; himself the greatest Shakespearean actor of all time and also a twin!
On the stage, acrobats, clowns and performers are limbering up. An old style caravan sits upstage and two young girls arrive, skipping, laughing and dancing. The performers head towards them but are stopped in their tracks as the girls start singing:

“I have sharp teeth within my mouth, inside my dark red lips. And polish bright hides my sharpened claws, in my fingertips…”

These are not girls to be messed with, and the carnivalesque air starts to show a darker side, that there is more to the girls than meets the eye, then the door of the caravan opens and we are transported to 49 Bard Street Brixton, the home of Nora and Dora Chance. This is their life story, through the highs and the heartbreaks of love and mistaken identities, this is a roller coaster of emotions celebrating all that is good about showbusiness, family, hope and the need to forgive.

Nora and Dora know who their father his, but he has never acknowledged the fact – that is, until they receive an invitation to his 100th birthday party. This is their chance to tell their story and although time may have aged them, Murfitt and Snook are playful and sassy as they chronical their lives. 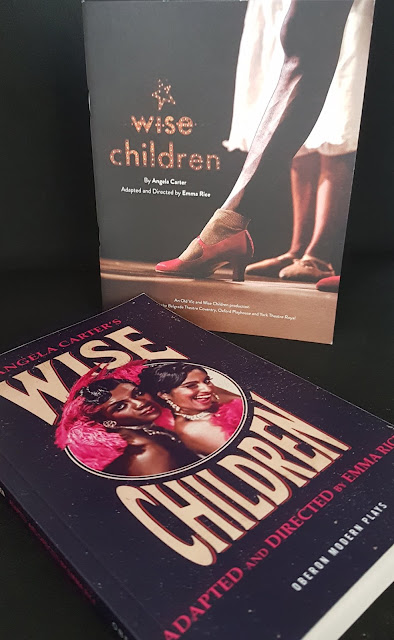 It becomes clear that Dora is the one with the common sense as puppetry and a talented cast take us back in time to pivotal points in Nora and Dora’s tale as share their dreams, their hopes, their ambitions with us. Katy Owen (Grandma Chance) brings the twins up in her own unique style and she is ever much the scene stealer as the over-the-top streetwise gran!  (Think Catherine Tate’s “gran” character and you’ll be both shocked and having hysterics as she teaches you a thing or two!)

There are various musical numbers such “Girls Just Wanna Have Fun” and “Electric Avenue” that make you want to get up and sing. And there are various beautiful touches of genius, when the cast are waving flags to represent flames, or Peregrines “Rupert Bear” trousers fading in colour as he gets older, to butterflies flying around the stage. This was a production full of imagination, storytelling, fun and laughter, and perfect for transporting you away from the drudgery of the day.