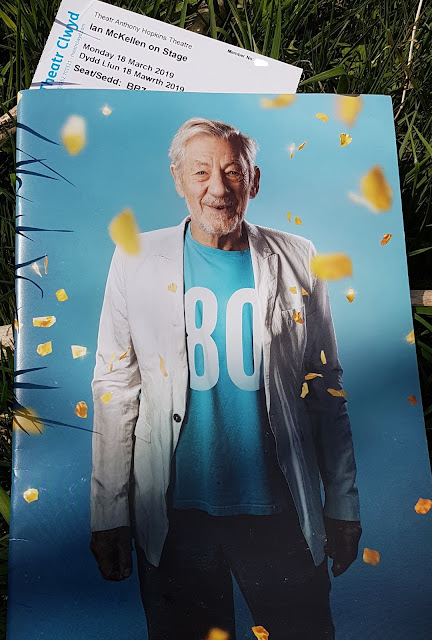 Sir Ian McKellen...with an 'E'...is a legend of stage and screen. I thought I was blessed to be able to see him in London (on my birthday!) playing the titular role of King Lear, but that wouldn't compare to seeing him treading the boards of my local theatre in Mold.

It's Sir Ian's 80th birthday year and he's celebrating in style, visiting 80 theatres up and down the country which have a particular meaning to him. As soon as I received the email that he was coming to Theatr Clwyd I told my hairdresser to get a move on so I could rush home and book a couple of tickets. By the time I got home I'd missed the front row seats, but I managed to purchase two seats on row BB, and the way the seats were arranged, technically you were kind of on the front row view-wise!!

Later that evening I told my other half I was seeing Sir Ian and that my friend Nikki would be joining me. Now everyone on here has probably gathered that my OH isn’t a theatre goer, but I had committed the cardinal sin. "But, but, but, that's Gandolf he exclaimed!" Oh dear God, there would be no end to it if I couldn't get him a ticket, so back online I went. I was stunned, the tickets were not on general sale and within 12 hours were practically sold out on both evenings. I found a seat on row A for him which he was happy with...and so he should have been, it cost nearly three times as much as my ticket (a £10 bargain!)

"You shall not pass.” 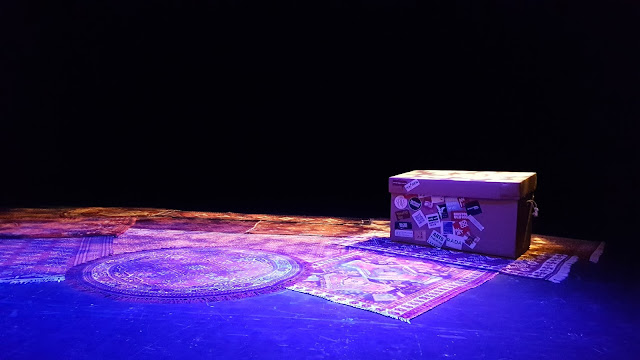 So the evening I'd been waiting ages for arrived. Nikki, OH and I went to the Glasfryn for dinner and Nikki and I got tipsy on a bottle of Prosecco! We excitedly sat down. All we could see on stage was a large box...how funny it would be if he burst out of the box we giggled. Suddenly the lights went off, we were sat in a pitch-black auditorium, and the sound of Sir Ian’s voice boomed through the darkness…”You shall not pass”…Gandolf was suddenly in the room with an enraptured audience. He held the great tome aloft as he quoted its contents. I was stunned…remembering lines for a play was one thing, but remembering great swathes of text? I sat feeling a little ashamed that I have never read the Lord of the Rings, or indeed The Hobbit. It turns out I’m in good company…neither has he!

We were then regaled with tales from filming Lord of the Rings. All the people that have told him they religiously read the text every year; including Christopher Lee, and just how fond he was of Legolas when he saw him. Ahhh Legolas...the only reason I watched the entire franchise!!

"Being an actor was never the plan, I just fell in love with the magic of the theatre. I had to be around it and the rest just followed.”

And so we progressed onto Sir Ian's life. His childhood, his dream of becoming an actor after watching the magic of Peter Pan come to life on stage. His early days of acting up in his hometown of Wigan. How back in the day you had a touring box, hence the box on stage, which would contain all you needed...props, costumes etc to go on stage. And that of course was why he couldn’t jump out of the box...it was too full of what he required for the evening's entertainment. I smirked at how well he knew the minds of his audience.

I thought he had chosen Theatr Clwyd as he must have performed there, but no, that night was the first night he had trod the boards of the Sir Anthony Hopkins Theatr. So why choose Mold...a theatre in the middle of nowhere, in a town no-one has heard of.  Well it turns out that as a child he remembered holidays down the road in Conwy, and his father walking the nearby Snowdonia Range. He had spent the day reminiscing in Conwy...and I think that set him up for an excellent evening of storytelling.

"Has anyone here been to Buckingham Palace?"

A cheeky glisten is in his eyes as he good-naturedly enquires of the achievements of the audience. He’s not showing off; he’s sharing an intimate moment of when he received his knighthood. There is no pretentiousness in his tale, he is still the down to earth person he was growing up in Lancashire, but he is someone who has stories most of us can only dream about, and here he is, in his armchair recounting tales that are very personal to him. 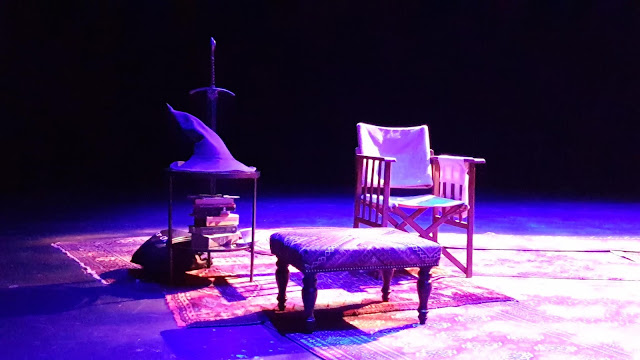 Sir Ian launches into a rendition of Gus the Theatre Cat by T S Eliot while sitting in his foldaway chair. It always chokes me when I read it, ever since I was a child and I got Andrew Lloyd Webbers stage play on Vinyl! Sir Ian is playing the voice of Gus in the new film version of Cats which is set to grace the cinema screens in 2019. His ability to recite poetry is sublime, this is continued with his reading of Sir Edward Manley-Hopkins’ The Leaden Echo and the Golden Echo – the lament for lost beauty and youth which brings the first half of the show to a close. (Whilst it was wonderful to listen to, I must be honest and say I still prefer listening to Richard Burton’s rendition!)

"Go to Flint Castle; there I’ll pine away"

After the interval it was time to bed down with Shakespeare. Sir Ian has had an extraordinary career as a Shakespearean actor. He invited us to shout out the names of all of Shakespeare’s plays, curious to know if we could remember them all, including the obscure ones. He did note there were some members of the audience who having directed Shakespeare and should know them all...and were therefore not supposed to shout out!!! Just to illustrate how many plays Shakespeare wrote, he rummaged in his box and brought out copies of each text! As a title was shouted out, he would pick up the relevant book and give an insight into a story whilst  he had performed the play, or indeed at times he’d put the book down, give a withering look and say “I have nothing to say about that one!”

I was sat wearing my Macbeth t-shirt...hmm should I shout that out? Maybe if I did the theatre would fall down...you know what theatrical folk are like...maybe I'd be better shouting the Scottish play...but then what if he's not superstitious?  By the time I'd finished deliberating someone had beaten me to it (the Scottish play they called out)...and his anecdotal response made me realise that it turns out not all the acting fraternity are particularly superstitious after all!!!! 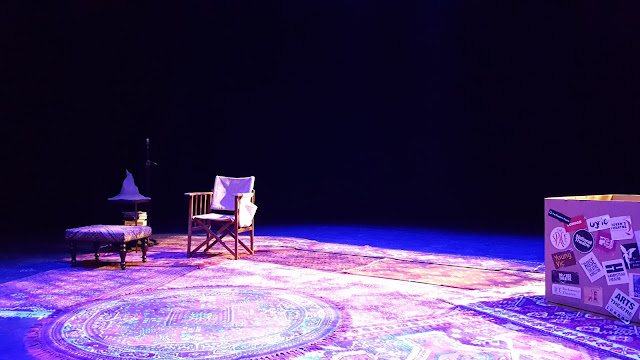 I then started thinking obscure plays... Troilus and Cressida...yes I'll shout that. But then I thought...did Shakespeare write it?? Deep down I knew he did...but what if he didn’t...hmm maybe I shouldn’t have had that Prosecco. So I remained tight-lipped, and as we got further through the plays I couldn’t remember everything that had already been shouted out...I didn’t want to duplicate an answer...so I left it to the folk sitting near the director to continue shouting out! Self-doubt...a terrible affliction, but then I don’t pretend to be a master of Shakespeare, or indeed any playwright.  I also know that I have a terrible memory for names...so best to shut up, enjoy the evening and indulge in watching others have fun. (You don’t always have to be the gobshite to be part of an evening’s entertainment!)

I thought that Sir Ian would restrict his local anecdotes to the earlier part of the show, but as he picked up a copy of The Tragedy of King Richard II, he said, “you know this has particular relevance to this theatre?”

He then started to recite from the end Act III, Scene II.

By heaven I’ll hate him everlastingly
That bids me be of comfort anymore.
Go to Flint Castle: there I’ll pine away;
A king, woe’s slave, shall kingly woe obey.
That power I have, discharge; and let them go…

Flint Castle is just down the road from the theatre in Mold.  This was a master at work. A man with a long life in the theatre, but with no heirs and graces, just a great memory, and the ability to share the most pertinent pieces of literature with his audience. 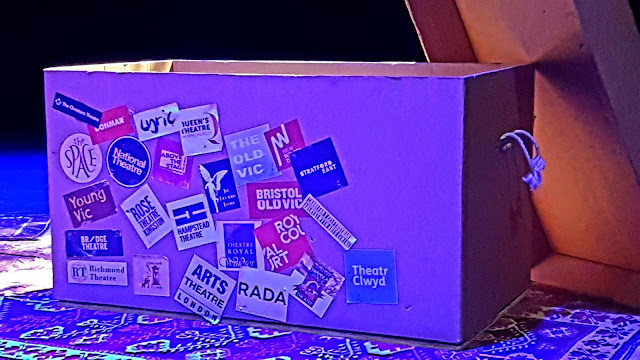 And then the evening drew to a close...Sir Ian stood on stage with his big yellow collecting bucket. “The money you have paid for your programme will go to this theatre, and the money you put in this bucket will go to the theatre too.” How amazing of him...each performance would benefit the theatre he was playing at. An extraordinary gentleman was standing in front of us. He had entertained us with tales of his youth, his career, his sexuality for two and a half hours. It was hard to believe that this man standing in front of us was in his 80th year.

As I walked towards the bar I could see a great crowd surrounding him. I could have barged through all those camera phones to have a word with him, but was it really necessary? People were wanting selfies… (I'm not a huge selfie queen as you all know) and his hands were full with a collecting bucket so making him put it down to sign a programme would be rude. If I introduced myself would it really matter? He won’t remember me, he can already see the delight in everyone’s faces so he knows he’s entertained everyone. If I gushed at him “Oh I loved your rendition of Gus, it made me shed a tear” it would be more for my benefit than his…a sense of entitlement almost. So instead I sat at the bar with Nikki and my OH and we watched the crowd, and we watched Sir Ian, and we were content. There is a time and a place for chatting to an actor, and for me, this wasn’t it.

"An Invitation to Dinner"

I don’t know if you have ever played the game "who would you invite to dinner?" I have, and unsurprisingly most of the people I would like around my table are actors! Sir Ian is on my list, obviously Tom Burke (and his parents as I imagine they have some great tales to tell), David Suchet, and the late, great, Alan Rickman (who Sir Ian paid homage to in tonight’ show.) I think they get a seat around my table because they lead extraordinarily fascinating lives, (although I suspect most of them think their lives very dull and normal.) Couple this with the fact that they know how to deliver a tale so that is highly entertaining, it makes sense to invite them round your table…no-one wants a dull dinner party! Whilst the spirit of the game is just a bit of fun, I have been blessed to listen to Tom telling hilarious anecdotes and after an evening of Sir Ian McKellen on stage, I felt that I had spent an intimate evening amongst friends, and Sir Ian was at the head of the table!