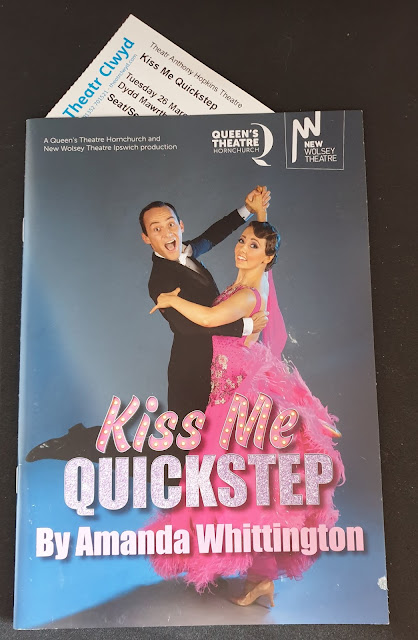 I love Strictly Come Dancing. I’m not one of those mega fans who can recite who appeared in each series, nor can I tell you who won each year, but as a piece of easy watching entertainment as the winter nights draw in, it ticks many boxes for me. Fabulous costumes, dancing, great music (although some memorable tunes have been reduced to screeched pastiches by the in-house singers) and a host of people (many of whom I have never heard of) trying to learn a new skill.

When I was at school, I made costumes for the dance troop in my spare time. I think my teacher hoped I’d have a career in fashion or costume design, but sadly my school didn’t offer A-Level Textiles, plus my confidence in my artistic abilities plummeted during my 6th form at school. There were people out there far more talented than me and I had no-one telling me to believe in myself or pointing me in the right direction, so sewing became a pastime for pleasure.

When I saw a play called Kiss Me Quickstep at Theatr Clwyd, I felt I would be spending a night blown away by fabulous costumes, music and dancing. I arrived to take my seat and was told I would have to wait until the safety curtain was raised. I was a little bemused. I thought the stage was going to be traverse style…which to be fair it was…I just thought I’d be sat below stage level…not actually on it! Once I got over the initial shock that I would be sat on the stage, on the front row with the rest of the audience able to see me I settled down to take stock of my unusual viewpoint. I felt as though I was one of the judges, ready to hold up my score card each time a couple danced! I tweeted a photo of where I was sat and someone responded by sending me one from the stalls...here's looking back atcha!

Kiss Me Quickstep takes you into the world of ballroom and Latin dance competitions. We are transported to the Blackpool Winter Gardens and the National Amateur Championships and the private battles three couples have in their quest to raise the winning trophy. There are the reining champions, Lee and Samantha; the new partnership of Luka and Nancy; and the ever-hopeful Justin and Jodie who up until now have danced in the shadow of Lee and Samantha. Just like at real competitions, the actors sat on the stage changing from their track suits into their sparkling dresses. But it seemed they also brought some excess baggage with them too.

Samantha is still mourning the loss of her mother and is unable to compete without slyly drinking vodka from her water bottle. Justin and Jodie arrive at the competition despite their car falling apart and breaking down enroute, and it seems that they are so deep in debt the chances of them being able to fix the car or buy a more reliable mode of transport is as much a pipe-dream to them as winning the competition. Poor Nancy is trying to have success in the shadow of her bullying father who has recently paid for Luka to come over from Russia to become her new dance partner as the last one wasn’t good enough!

All of this makes for the premise of a great story, but despite sitting in the thick of the action I found the play a bit dull. The characters were rather wooden and one dimensional. It seemed that their trials and tribulations were a bit boring and there was no underdog to root for. Everyone seemed to be on an equal footing, each with their own revelation that you’d already worked out for yourself. There wasn’t enough chemistry for the audience to believe that Samantha and Jodie had been best friends at school, or that Luka and Lee are clearly gay. This was skirted around, and bearing in mind the furore that has beset Strictly Come Dancing about same sex couples, this would have been the ideal ground to explore this narrative.

When we get to the quarter finals a couple is eliminated and Nancy’s dad continues to interfere in her routines on the basis that he is trying to ensure she doesn’t win the competition. It all seemed rather confused and dreary which is a shame as there were some really good dance routines, but they were too short and crammed into the second half. The chorography extended beyond the Jive, Foxtrot, Paso Doble etc as crew members wheeled dress racks in a routine across the stage to create dressing rooms for the contestants, and it was nice to see local community dancers take to the stage to give the impression that there were more dancers in the competition, but this didn’t salvage the play.

I enjoyed the dancing and the costumes, and it has to be said the cast gave superb performances from this lacklustre text, but I found the story rather insipid and not full of the glitz and glamour I was expecting. In the words of former Strictly judge Len Goodman, I would give this production a kindly “Severrrrn!”