The Girl Who Fell Beneath the Sea by Axie Oh 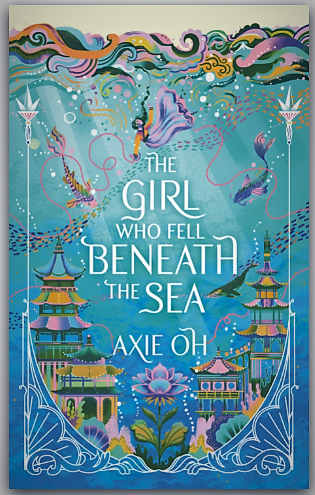 It’s not that often that I opt to read teenage fiction, but when this gorgeous book cover dropped in my inbox, I couldn’t resist giving this short but engaging book a chance.

The Girl Who Fell Beneath the Sea (Due for publication 22nd February 2022 by Feiwel & Friends) is a magical feminist retelling of the classic Korean legend of Shim Cheong, the Devoted Daughter:

The myth states that Shim Cheong’s mother died when she was born, and her father was blind and unable to work. One day her father was crossing a bridge when he fell into a river, a passing monk saw the man drowning and jumped into the river and saved him. The monk told the blind man that if he offered Buddha three hundred seoks of rice, he would regain his eyesight.

The blind man could not afford to buy so much rice, but when he told his daughter, she knew what she had to do. She had heard that some sailors would pay good money for a girl as an offering to the Sea-God. Rather than tell her father the truth, she told him a family had agreed to adopt her and she left with the sailors. Shim Cheong jumped into the roaring sea as a sacrifice. When she awoke, she was unaware where she was, but a voice told her she was in the Sea King’s palace, and he was so moved by her tale that he had ordered she be returned to the land of her birth.

Shim Cheong was returned to the sea in a lotus blossom where she was found by the sailors. They presented the lotus blossom to their king and when he touched it Shin Cheong walked out. The King fell in love with Shin Cheong and they were married, but he couldn’t help notice her sadness. She told the king her story and so he threw a party for all the blind people in the country in the hope of finding her father. Her father was still blind, despite his offering to Buddha, so he arrived at the party and was reunited with his daughter and they all lived happily ever after.

Deadly storms. An ancient curse. Will her sacrifice save them all?

Axie Oh has taken the basis of Korea’s famous legend and given the tale a new protagonist, Mina. For generations, deadly storms have ravaged Mina’s homeland. Her people believe the Sea God, once their protector, now curses them with death and despair. To appease him, each year they choose a young woman to be thrown into the sea, in the hopes that one day the ‘true bride’ of the Sea King will be chosen and his love and affection for his new bride will bring an end to the suffering.

The people have chosen Shim Cheong to be the legendary true bride, but she and Mina’s beloved elder brother Joon are already in love. On the night Cheong is to be sacrificed to the Sea God, Joon follows her out to sea, despite knowing that to interfere with the sacrifice carries a death sentence. Mina loves her brother a great deal and cannot bear to witness how sad her brother is, so she follows her brother, and when the times comes for Shin Cheong to be sacrificed, Mina throws herself into the waves instead.

Mina is swept away to the Spirit Realm, a magical city of lesser gods and mythical beasts. Here she finds the Sea God, trapped in an enchanted sleep. With the help of a mysterious young man and a motley crew of demons, gods and spirits, Mina, who remains in human form, sets out to wake him and bring an end to the storms once and for all. The clock is ticking…a human cannot live long in the land of the spirits and there are many in the Spirit Realm who would do anything to keep the Sea God from waking…

“The myths of my people say only a true bride of the Sea God can bring an end to his insatiable wrath. When the otherworldly storms rise from the East Sea, lightning breaking the sky and waters ripping up the shore, a bride is chosen and given to the Sea God.

Or sacrificed, depending on the measure of your faith.

Every year the storms begin and every year a girl is brought to the sea. I can’t help wondering if Shim Cheong believes in the myth of the Sea God’s Bride. If she’ll find comfort in it before the end.

Or perhaps she sees it as a beginning. There are many pathways destiny can take.

For instance, there’s my own path—the literal path before me, stretching narrowly through the waterlogged rice fields. If I follow this path, it’ll eventually lead me to the beach. If I turn around, the path will take me back to the village.

Even if it were up to choice, it wouldn’t really be mine to make. For though a large part of me longs for the safety of home, the pull of my heart is infinitely stronger. It tugs me toward the open sea and to the one person I love beyond destiny.

I’m surprised by how much I enjoyed I this book. The plot was engaging, as were the characters, and the book was never overly sentimental. Mina was a compassionate character who cared a lot about her family and her people. Entering the realm of the Sea God allowed Mina to face some harsh truths and secrets, but with the help of the friends she made on the way she was able to come to terms with the realities of life.

Shin, who she first meets in the palace of the Sea King is equally compassionate, and as their lives begin to intertwine, he offers his own wisdom of the world to Mina. Shin’s arc is an interesting one. You never know whether Mina would be safer with or without him, and this relationship is intrinsic to the storyline, so it’s important that the author has balanced the storyline so well between them.

He lifts his gaze and his eyes are like the deepest part of the sea, cold and unknowable. I realize, his eyes do more to hide his thoughts than his mask does to hide his face.

“But I can explain it to you,” he continues. “Your people suffer not because of any great will of the gods, but because of their own violent acts. They wage the wars that burn the forests and fields. They spill the blood that pollutes the rivers and streams. To blame the gods is to blame the land itself. Look upon your reflection to find your enemy.”

Whilst the story is set in a fictional fantasy land, the morals held within the tale are an honest reflection on the world in which we live, and it gives food for thought.

My elder brother, Sung, says trust is earned, that to give someone your trust is to give them the knife to wound you. But Joon would counter that trust is faith, that to trust someone is to believe in the goodness of people and in the world that shapes them

I gave great reflection to the above passage. As I’ve grown older I’ve met many people. Some have gone onto be trusted friends, others have shown their true colours and no longer form part of my life. That is to be human. People have asked if I have any regrets, do I miss those people and I say no. People entered my life, I trusted them, I had some good times, they betrayed that faith and now they are gone from my social sphere. If I hadn’t allowed myself to trust them into my life, then I wouldn’t have some amazing happy memories to look back upon. But people change, groups do inevitably splinter; perhaps nowadays more quickly than ever, but that isn’t a good enough reason to not put your faith in a person. The world doesn’t revolve around people, they are just a tiny part of it, and this books allows us to question ourselves, our morality, and how we can change for the better.

“But it’s supposed to be a circle, isn’t it? The gods protect the humans and the humans pray and honor the gods.”

“That’s just like a human to think the world revolves around you, to think the rivers are for you, the sky, the sea is for you. You are just one of many parts of the world, and in my opinion, the one that blights them all.”

This is a book which surpassed my expectations, which is always a delight. Had it not been for the beautifully illustrated cover, I doubt I would have given this short novel a second glance. It is a book which magically weaves poetry and proverbs into a tale which isn’t stuck in the past but is relevant for today’s society. In fact, it probably comes at just the right time as the themes of kindness and looking out for one another are needed now more than ever. As daily news briefings show societies rebelling against Covid rules, this book serves as a reminder that we should look out for others not always ourselves, and that by doing what is right, gives you more strength and ultimately benefits you in the end. Whilst the book is aimed at young adults, that shouldn’t scare anyone getting lot in the adventures of Mina, Shin, Namgi, Kirin, Mask, Dai and Miki.

Thank you to Hatchett UK for the ARC in exchange for an honest review.