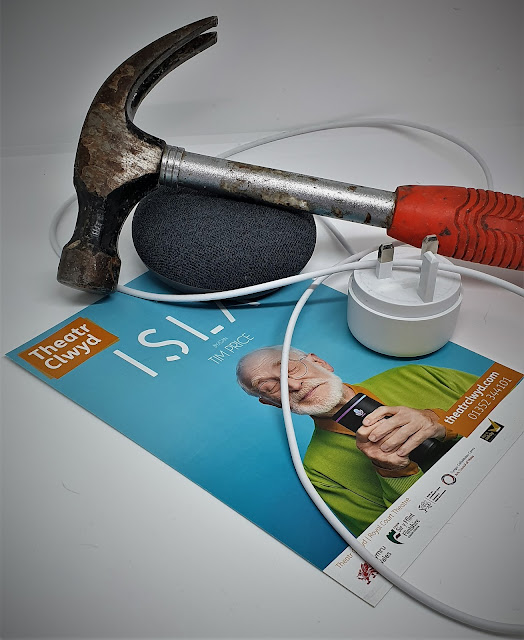 I have a love hate relationship with technology. When I was at university in the 90’s, those around me worked on computers whilst I had an electronic typewriter that seemed to have a mind of its own. I think I was nearly 30 before I finally succumbed to enter the modern age and buy myself a laptop.

When I was driving somewhere new, I would study my map book – I would work out which route I was to take and write down the major junctions I needed on post-it notes which I’d stick to my dashboard…discarding each one as I travelled along my hosen route. Now of course it’s much easier, I never bought a Satnav but I have become reliant on Google Maps on my phone…or as I call it Satnav Woman.

Satnav Woman is brilliant...until she isn’t. She can tell you which route to take and then reroute if there’s an accident or heavy traffic ahead, but she can also be a bit slow telling you where to go, or perhaps a little unclear in her meanings. And then there are the times when she just won’t listen. It’s times like these that Satnav Woman and I will get into a little spat.

ME: “I can’t – there are cones down the centre of the road.”

Me: “I can’t, it clearly states no U-turn on the signs ahead.”

ME: clearly very agitated “Which part of I CAN’T don’t you understand you stupid Bi**h?”

Now I’ve always thought of my interactions with Satnav Woman mildly entertaining. I mean why would you lose your temper with an inanimate object? It makes no sense, and in a rational world you wouldn’t. But perhaps we don’t live in a rational world anymore. Perhaps it’s normal to start shouting “what do you mean” when she’s telling you to “keep left to go right at the fork.” Perhaps I’ve been looking at my interactions with Satnav Woman all wrong.

Isla, a new play by Tim Price, is a co-production between Theatr Clwyd and the Royal Court and directed by Theatr Clwyd’s Tamara Harvey. It explores the relationship between a man and a voice activated digital assistant during the period of lockdown.

Roger’s daughter, Erin, is concerned that her father will be alone during the pandemic and that he’ll forget to take his daily medication. She buys him Isla (think Alexa or Siri) and she will help Roger with his shopping orders, relay telephone calls to him when he has mislaid his ‘phone, remind him to take his tablets each morning – she can even play music when he’s feeling a bit lonesome. Roger is not convinced and explains to Erin (Lisa Zahra) that he takes his statins every morning as soon as the morning newspaper is delivered. He has his own routine; he doesn’t need her interfering in his life.

Erin is clearly worried about her father and concerned that during the pandemic she won’t be able to pop in as freely as she used to. They must keep their distance, so Isla will be a great help. Despite her persuasive attitude, Roger (Mark Lambert) is not convinced, he doesn’t want this technology infiltrating his life, he’s not ready to embrace this new world, and we witness the hilarity and hatred of the digital age as he tries to interact with this machine, literally pulling the plug on it as it continues to frustrate him. But soon stubbornness becomes inquisitiveness and Isla is plugged back in. Roger is in lockdown, he can’t interact with people anymore and as loneliness takes hold, he begins to have conversations with Isla. First of all he asks simple questions and he is taken aback by Isla’s breadth of knowledge, and soon quiz questions turn into shared memories with her, he voices his concerns, his anxieties, his frustrations at not being able to interact with living human souls.

There is a particularly poignant moment when Roger asks Isla to phone his daughter as he desperately wants to talk to her, but he knows she is busy at work, so he tells Isla to stop the call. He then asks her to make the call…then stop the call. This struggle between wanting to speak to his daughter but equally not wanting to be a burden is heart wrenching and shows that technology can never replace the importance of human interaction. We suddenly have such empathy for Roger that we are shocked by what happens next.

Lambert is superb as Roger; we spend each passing day in his company, witnessing the daily monotony of the newspaper delivery, boiling the kettle for a morning cuppa, taking medication; a never-ending cycle of the humdrum of life. A life spent yearning for normality to return…for a father to be able to hug his daughter. We’re called to think about the loneliness of the elderly, how the young are slaves to the workplace if they want to achieve anything, and how today’s modern living can mean relinquishing your privacy.

Kind, sweet, lonely Roger starts to throw a curve ball, he’s become so used to Isla he now throws the same casual abuse at it as I have often done to my Satnav. Casual abuse turns into sexist phrases. But this is a machine, you can’t demean a machine, there’s no harm in a light bit of banter is there? Maybe not for Isla, but Erin used her account to set up the digital assistant for her father – his words become her words, and words have dire consequences. A new layer of complexity is added to the play, a darker more thought-provoking piece of writing. As Catrin Aaron, the voice of Isla, appears on stage in police uniform, you realise that words do have consequences when they are misapplied. Roger is quizzed by PC Jones about the language he has been using, the meaning of the words he has chosen to direct at Isla, the intention that they imply. All too soon we must consider the harsh reality of the links between hate speech and domestic violence. It seems a far reach, but then consider that until very recently, digital assistants have been female. Female names, female voices…servants by any other name and therefore to be treated as dirt.

It's an interesting question why digital assistants have always been female. Some companies have advised it is because the human brain is developed to like female voices; but we know women receive criticism for being “screechy” so this excuse doesn’t really work. Microsoft said it found a female voice to best embody the qualities expected of the digital assistant—helpful, supportive, and trustworthy. Perhaps the real truth of the matter is that companies don’t want to admit to gender bias. A digital assistant is there to be bossed about, Alexa do this, Cortana do that…and up until recently, society expected women to fulfil these roles. And if you lose your temper to a female device, why can’t that spill over into a real domestic setting?

Whilst we don’t see Lambert and Zahra on stage together for much of the play, we still get a sense of their deep connection as father and daughter, and it makes the final scenes even more important, showing that a machine can’t give the love and support that a person needs. Digital assistants...anyone got a hammer?!