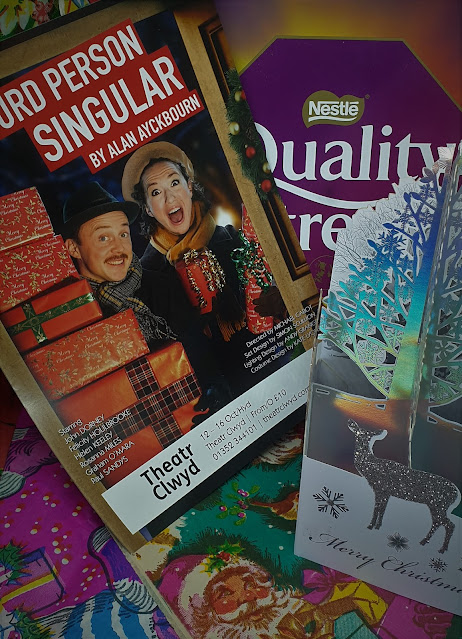 Yes, I know it’s October and I’ve mentioned the “C” word, but forgive me, this was another of those long-awaited productions delayed by covid that I’ve been itching to see and believe me it could have been worse; when the tour started in Derby they were having Christmas in June!

Sidney Hopcroft doesn’t have much going for him, he’s uneducated, charmless, a local tradesman, but he has a will and a desire to succeed. His wife Jane is the typical suburban 1970’s housewife, lacking ambition and maintaining a spotless home. And I do mean spotless. The play opens in the Hopcroft’s kitchen and Jane is cleaning. Cleaning, cleaning, cleaning. Everything must be perfect tonight; somehow, Sidney has persuaded her to throw a Christmas Eve party to impress his bank manager and a local architect.

As the celebrations begin, unsurprisingly, these three odd couples all end up in the kitchen – I mean this is a party and all the best parties I’ve ever frequented have ended up in the kitchen. You can tell a lot about someone from their kitchen or at least that’s what banker Ronald and his wife Marion think. This tiny, bright orange Formica kitchen might not be to everyone’s taste, certainly not Marion’s, but it is spotlessly clean, and it has simple mod cons like an automatic washing machine which Jane is so excited to tell her guests about. Chaos reigns supreme and the atmosphere changes from quiet anticipation to hilarity as the audience witness the comic capers of the Hopcroft’s as they desperately try to win over the Jacksons and Brewster-Wrights.

How many people does it take to change a lightbulb? Six according to Alan Ayckbourn - one to try committing an act of suicide and five to be so self-absorbed that they don’t notice. It’s a year later, and it’s the turn of architect Geoffrey Jackson and his wife Eva to host the Christmas festivities. Eva is sat in a more upmarket traditional pine kitchen, it feels more spacious than the Hopcroft’s kitchen, but void of any personality. There’s no automatic washing machine here, instead laundry is dumped in a basket in the corner; the oven is filthy and crumpled bits of paper adorn the floor. Sat at a cluttered kitchen table, Eva is penning a suicide note, but her husband is too wrapped up rummaging through the cupboards trying to find some drinks for the evening’s party which he’d forgotten about. Enter Jane, wearing slightly better clothes than last year, but still obsessively cleaning. As Geoffrey and Eva’s world is falling apart, she fills a bowl with water and merrily chats and sings to herself as she scrubs their oven clean, blissfully unaware of the dark torment raging in Eva’s head. Helen Keeley deserves a special mention for the way she managed to convey so much emotion as the catatonically depressed Eva, despite remaining mute for most of Act Two.

The third and final Christmas and more cracks are beginning to show as the tables have turned on the fortunes of our three couples. A quick transformation of the stage and we’re sitting in the freezing dining room, just off the kitchen, of the Brewster-Wrights. Eva has transformed from the suicidal blond to the supportive friend to the alcoholic Marion who no longer cares about her appearance and is oblivious to the cold as she flounces around in her nightdress.

Ronald’s bank now depends on the deposits from Sidney whose business has slowly and steadily grown. After the literal collapse of one of Geoffrey’s architectural designs, he is now dependent on working on Sidney’s housing projects – something that he poured scorn on only a few years earlier. But needs must if you want to keep the roof over your head. The comic twists and poignant moments take another turn as the Jacksons and Brewster-Wrights pretend to not be at home when the Hopcroft’s arrive.

There’s an element of Chekhov despair drifting throughout the play; Sidney and his little wife were a joke, their role was to flatter the egos of their betters; but now, they are the ones calling the shots. During the last act Sidney, once nervous and desperate to find favour, has a newfound confidence and has everyone dancing to his own tune as he demands that everyone plays his party games. He has brought gifts, knowing full well the compliment can no longer be reciprocated. He did what he had to do in the 1970’s get rich culture to make something of himself, whilst the lazy banker and architect let the grass grow under their feet and their wives found solace at the bottom of a bottle of gin or a packet of anti-depressants. Let’s hope Sidney remembers what rises to the top can quickly sink to the bottom if he’s not careful.

Just like Dickens’ ghosts of Christmas Past, Present and Future, Absurd Person Singular takes you on a journey of self-awareness; but rather than a selfish man trying to redeem himself, this play takes you on an emotional roller coaster through the nuances of the different classes, how they look at themselves and each other, and it gives a comic nod to the dangers of holding social gatherings. This is not a play stuck in the 1970’s, sadly it remains prescient today. We don’t need to throw parties anymore to try to impress, we’re now a society obsessed with social media, wanting to achieve the unattainable…whatever the cost.

The 2021 tour concluded at Theatr Clwyd.