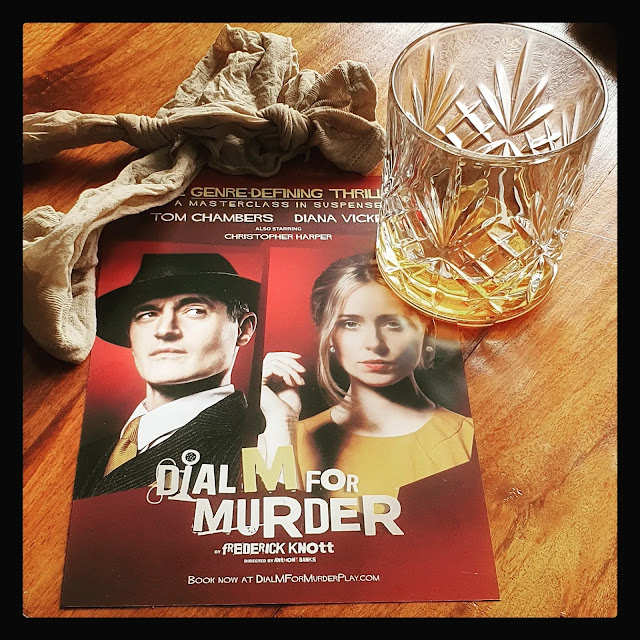 Retired champion tennis player Tony Wendice (played by Strictly Come Dancing winner Tom Chambers) wants to murder his socialite wife Margot (X-factor finalist Diana Vickers.) Not only has Margot been unfaithful to her husband by having an affair with crime writer Max Halliday, but she’s also sitting on a small fortune which her husband needs to get his hands on the because he’s broke. Whilst he may have several trophy’s lining his front room shelves, he was playing tennis in an era where tennis players weren’t paid.

Many people will be aware of Alfred Hitchcock’s 1954 film version of Dial M for Murder starring Ray Milland and Grace Kelly, however, it was BBC television that first aired a production in 1952; the same year that a theatrical version was also performed.

As I loved Hitchcock’s version, I was rather excited to finally watch this play; I’d bought tickets pre-covid when the tour was first announced, but unfortunately the production had to be postponed several times until it was deemed safe to reopen our theatres and touring could commence.

Is there such a thing as the perfect crime?

Tony has spent months perfecting the perfect murder, however, he’s a coward who won’t get his hands too dirty, so he enlists the help of an old acquaintance from his Cambridge University days, Charles Swann. Tony is aware that Charles became a small-time criminal and because this is the perfect crime, he can use his knowledge of Charles’ history to his advantage. He arranges a meeting with Swann, claiming he wishes to purchase the car Swann is selling, but over a few drinks, he confides in Swann about Margot’s infidelity. Six months earlier, Tony had stolen Margot’s handbag which contained a love letter from Mark, and he sent her an anonymous blackmail letter about it. Whilst confiding in Swann, Tony hands him the love letter to read, now that the letter has Swann’s fingerprints all over it, Tony tells Swann he can either accept £1000.00 to murder Margot, or he can be unveiled as the mystery man who blackmailed her. Swann grudgingly agrees to become Tony’s accomplice, and Tony explains his perfect plan for murder…

Oh what a tangled web we weave,

When first we practice to deceive'…

Mark Halliday is back on UK soil and visiting Margot. Tony tells Mark he should accompany him to a stag party the following evening thus leaving Margot home alone. Tony will hide Margot’s door key under the mat so that Charles can let himself into the property and hide. Tony would then telephone Margot from the party and whilst answering the phone, Charles would strangle her and then leave signs of a burglary before leaving the flat and replacing the door key back where he’d found it. Now the only problem with Tony’s plan is that it is reliant on everyone playing their part perfectly, and the only fly in the ointment is that Margot doesn’t know what her role in his devious scheme entails. So, just like Marmion, we’re about to witness a domino effect of complications which begin to spiral out of control.

Set in the front room of a ground floor flat in Maida Vale, this production is set a decade later than the original, a transformation that doesn’t add anything to this clunky new production of the classic thriller. The soundtrack opening the show is the 1959 classic The Flamingos - I Only Have Eyes For You, which immediately transported me back to The Deep Blue Sea at The National with Tom Burke and Helen McCrory. I say the production was clunky, because whilst I enjoyed the play, it wasn’t the edge of the seat spine-chilling thriller I was expecting. Instead, director Anthony Banks has injected a light-heartedness into the staging, which suits Tom Chambers’ acting style, but means that parts of the play which should be extremely dramatic, elicit raucous laughter from audience.

Tom Chambers appears to be having great fun playing the role of psychopath Tony Wendice, but he is too maniacal, and it undermines the cold calculated mind of a wife killer; I also found the smug self-esteem overbearing and the references to his past tennis career in his dancelike movements across the stage unnecessary.

Whilst all the actors were good, I felt there was a distinct lack of chemistry between the central trio, which made the whole plot unbelievable, and I didn’t really care who was sent to the gallows in the end.  And then there was the murder itself.

The joy of this storyline is that the audience has had it spelt out to them from the start what is supposed to happen. The tension in the air should become palpable as we move through Tony’s plan and see it start to fracture, but the comedic edge dilutes the tension. There isn’t that sense of shock from Margot, surprise yes, but not a deep dark horror that someone has just tried to kill her. The murder scene needed more conviction to keep me on the edge of my seat.

It was an enjoyable evening out, but it was less thriller and more comedic caper for my liking; but maybe a bit of tactical light relief is what people need in the current climate, and if that’s what the audience want – this production delivers on that front.