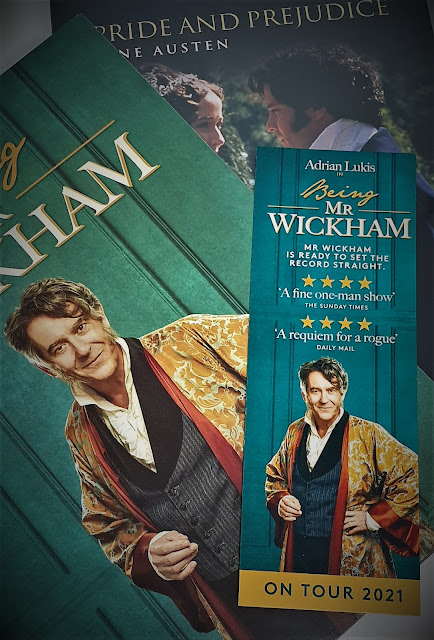 Back in 1995, the BBC made what I would consider the quintessential adaptation of Jane Austin’s 1813 novel Pride and Prejudice. The six-part series elevated actor Colin Firth to fame when he set hearts a flutter whilst striding out of the lake at Pemberley as the dashing Mr Darcy, wet white shirt dripping and clinging to his torso. The foil to Mr Darcy was George Wickham, played by Adrian Lukis, a man who shared his history with Darcy.

Wickham was a charming militia officer who manged to attract the sympathy of the heroine Elizabeth Bennett. She believed Darcy to have mistreated Wickham in the past and it took the interaction of her aunt to forewarn her that the path to happiness was most certainly not to be found in George Wickham. As the story continues, the aunt’s warning plays out and it is revealed that Wickham is a manipulative cad. He is a wastrel, a compulsive liar, a seducer and live the life of a rake…in fact Jane Austin doesn’t really have anything nice to say about the man.

Now whilst I could never envisage dear Lizzie Bennet ending up with the dastardly Mr Wickham, I must confess to having a bit of a soft spot for him; I mean think of Dolokhov in Tolstoy’s War and Peace, you’re not really supposed to like him, but there’s just something utterly compelling about these characters. I think Dolokhov was rather misunderstood, the question is, was George Wickham?

‘Am I to be the villain of my own story?’

You may recall that our last image of Wickham is when Darcy forces him to make an honest woman of Lydia Bennett after he has eloped with her. So, what happens to Wickham after Pride and Prejudice has ended? Adrian Lukis is back as Mr Wickham and this play he has written and stars in attempts to provide an answer. It’s time to push Mr Darcy to one-side and give George Wickham a chance to put the story straight, after all, he isn’t going to tell the same tale that Jane Austin would.

It is Wickham’s 60th birthday, following a flirtation at his party, his wife Lydia has stormed off to bed leaving him all alone with a bottle of claret and a whole host of memories for company. Just as we can’t forget Mr Darcy, neither can he, his takes us back to his earliest encounter with Darcy when they were children, through the period we bore witness to in Pride and Prejudice, to what happened after they were both married. There are often two sides to a story, and the storyteller will always tell you the rose-tinted spectacle version.

Adrian Lukis is a charismatic actor, making you hang onto his every word as he draws you back into being complicit with Wickham’s bad boy behaviour of the past. Wickham’s currently worried by his diminishing looks and his aging knees, "I'm told I'd pass for 40" … "on a good day." That pause, that sigh, the raised eyebrow…how can you not be transfixed by this scoundrel?

Being Mr Wickham is a fervent defence of a man the audience knows cheated and lied to gain every advantage he could. He was willing to accept his life as a vicar. He genuinely loved Georgiana. He had a perfectly acceptable defence of his elopement with Lydia. He has told these stories to himself so many times that he now truly believes in them. His trip down memory line is so far apart from Jane Austin’s you’d be forgiven for thinking that two different people were being explored. But this is what makes the play so engaging – to hear a different perspective. Austin would be horrified that Wickham could potentially have a softer, kinder side, but we know from his past he manipulated those around him…and a leopard doesn’t change his spots. Just as Elizabeth Bennett fell for his charms, he now has a whole audience eating out of his hand, hanging onto his every word as he charms his way through this hour-long production making the audience laugh along the way.

It’s a well-balanced play; whilst there’s a melancholy to some of his reminiscences, there are elements of light to the shade, although often these lighter moments point to a life that’s not as happy as it may seem, ‘When Lydia is happy, I am happy; When Lydia is asleep, I am delighted.’ As he wanders over to the window to watch the comings and goings of his neighbours, his excitement is palpable about the possibility of his next-door neighbour’s daughter eloping.

The writing is particularly vivid as Wickham recalls the Battle of Waterloo; the walls of the set turn dark, and a military uniform appears from what were frosted windows, and he recalls the demise of his dear friend Denny, shot next to him on the battlefield. He Byronesque persona shone through as he recalled the losses of various courtesans he knew and loved, and other people who had passed through his life who were no longer there to share in his current trials and tribulations.

We journeyed through all his life…his childhood and his mother abandoning him and how young Darcy took the wrap for young Wickham stealing a bottle of Brandy. We learnt how unhappy he was at school, how Darcy paid him off instead of him having a career within the church and how he spent that money chasing wine, women and song. How he remained with Lydia because they made each other laugh, but despite everything this was not a man to feel sorry for. He has had his ups and downs like anyone else.

Just as Colin Firth is Mr Darcy, Adrian Lukis is Mr Wickham and it was a delight to see the character brought back to life as the layers of his life were peeled away like an onion. There was a reason he could charm the Bennett sisters, and throughout the evening he charmed the audience just as easily. It was a joy to watch this thoughtful “sequel” to Pride and Prejudice which fans of the novel could delight in and an even bigger joy and surprise when Adrian returned to the stage as himself to take part in a short Q&A session which was just as entertaining as the play.

If you ever get the chance to see this delightful one-man show – take the opportunity as it’s worth it. 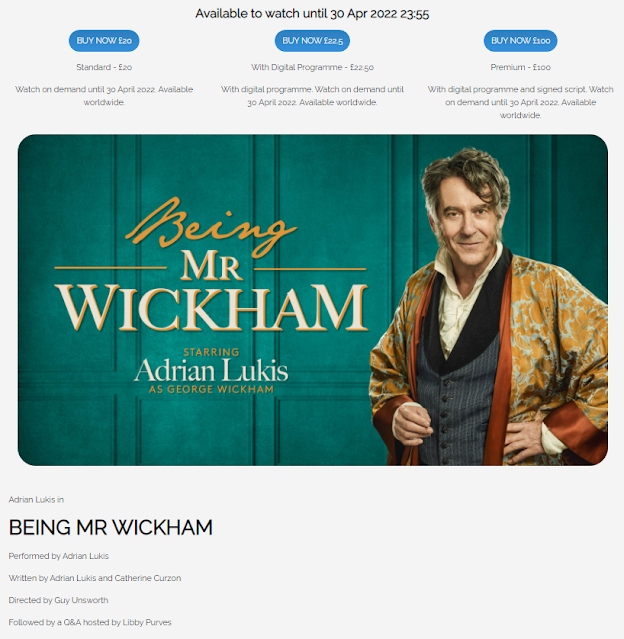