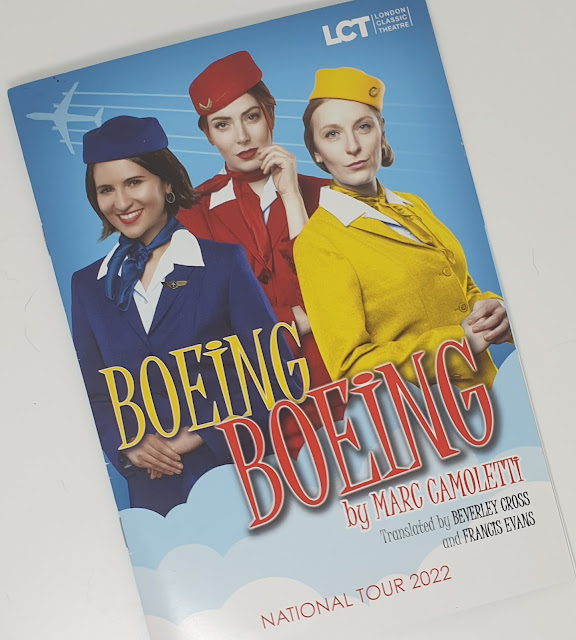 Set in Paris in 1962, Marc Camoletti’s play Boeing Boeing is a magnificently funny tale about how Bernard, (John Dorney), a successful architect, juggles his complicated love-life, whilst not really caring that he is dragging both his maid and old friend into the chaos against their will.

Bernard has three fiancées, Gloria, Gabriella and Gretchen. All three work as flight-attendants for different airlines, and with the help of his long-suffering housekeeper Bertha, he has so far managed to keep each woman unaware of the other’s existence due his carefully scheduled routine.

Bachelor Bernard thinks settling down with one person would be too much of a challenge, therefore why not have the best that life can throw at you? Two partners would be a bit boring, four partners too much juggling required, but three? Three is perfect…or so it seems. As careful as Bernard’s calculations are, he can’t stop technology and the launch of a new super-speed jet is about to throw all his high-precision plans into disarray; that and the odd storm and a bit of bad luck. This is one day in Bernard’s life he is never going to forget.

John Dorney is fantastic as Bernard, especially when a bit of turbulence sends him from the careful man in control, to the stressed clumsy man panicking about what to do next. His physicality on stage is hypnotic as his body starts to contort in every direction when his character starts to unravel; very much in the style of John Cleese in Fawlty Towers! The descent from calm to panic and near-hysteria as Bernard tries to keep all three women apart in flat is joyfully crafted, with some great comic timing and some beautifully delivered one-liners. Poor Bernard, it’s hard not to laugh as we watch him suffer.

Robert (Paul Sandy) is a nice contrast to this exuberance. He hasn’t seen his friend for a long time, so when he arrives and hears what his friend is up to, he’s initially stunned. He approaches everything with a sense of calm innocence, starting and ending the play with the same considered composure.

Jo Castleton shines as the cynical housekeeper charged with preparing food to suit the different nationalities of the three women; she saunters across the stage with a world-weary look about her as she takes on the demanding roles of chief cook, brothel-keeper and traffic-control!

The ladies add a glorious splash of colour in their contrasting dress. The first fiancée we meet wearing a vibrant red uniform is the kooky American Gloria (Isabel Della-Porta), she is finishing breakfast and heading out to the airport to start her shift. As she leaves, the fiercely patriotic German Gretchen (Jessica Dennis) wearing a bright yellow has finished work and is ready to have lunch with Bernard. Finally, the fiery Italian Gabriella (Nathalie Barclay) appears, ready to spend the night at Bernard’s. All three actors appeared to relish their roles, they seemed at ease with their accents and looked to enjoy themselves immensely as comedic chaos reigned supreme.

A huge round of applause should go to Bek Palmer’s design, not only of the bright vintage costumes, but also the 1960’s set, which at the time would have looked futuristic and space-age but now looks really retro! The bright lights and colours on the stage look akin to a TV studio, and the semi-circular design of doors has you wondering who will pop out of each one and when.

This play does justice to the classic French farce, and whilst in parts you sit waiting for the inevitable to happen, the play does have a few twists to keep you on your toes, and as Bernard says, you can ‘never tell a woman what to do.’ It's another wonderful production from London Classic Theatre.