It was an amazing experience queuing up waiting for the doors to open to the event. People were dressed in the most fabulous costumes. For the die hard Comic Con fan it must be such a highlight to dress up and meet your favourite stars. People were stopping them to have photo's taken with them, they were possibly more popular than the actual stars!

Once in the actual convention centre I headed straight off to get my photo done with Tom. Sadly I was so excited I couldn't do anything other than squeal! I think I almost leapt on the poor fellow, throwing my arms round him and beaming brightly. This from a woman who HATES having here photo taken! Seriously, there are hardly any photo's of me in existence and I don't even know if or what he said to me. I was so oblivious and happy to be within his presence I just entered this strange alternate universe where I wasn't aware of anything around me. I was gloating. Is this what it felt like being a twelve year old when Take That formed?!!!!

Anyway, after the initial squealing of photo shoot, the Burketeers headed upstairs to the signing area... and pretty much camped out there for the rest of the day! Poor Tom, every time he looked up there we were grinning like Cheshire Cats and taking photo's. Forget the paparazzi, Burketeers will keep that camera clicking all day, but we will do it in full view, we don't hide away!

Soon it became our turn to get autographs and I had a drawing I had done for him to sign. Ohh a chance to chat and I blew it! Well I say I blew it, I just blathered on and on at him about random stuff. Never let the poor bloke say anything, or if I did I was so excitable I just waffled on over him.

At the end of the day we asked if he would do a photo with all of us, he said yes and got Luke and Maimie in on the photo too, but he made it clear this photo was only for his Burketeers :-)

Such a fantastic genuine man, and a great day that will live on in many people's lives!  All I can say is thank you Tom for being such a brilliant and patient human being! 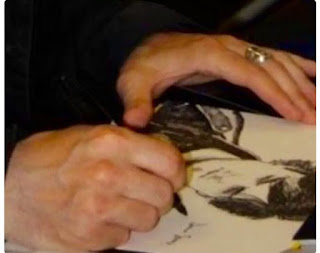 Tom signing my drawing of him as the character Davy from the film Third Star (If you've never seen it, it is a much watch film. Tom and Benedict Cumberbatch are amazing in this film). 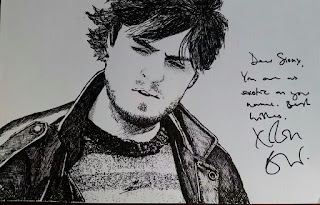