January 18, 2016
Things might seem quiet around here but I have spent the week surrounded by papier mache and watercolours. The papier mache can be ignored for now...it's a long term project (each layer takes a while to dry) so I won't be showing what I've been up to for a while!

The watercolours however I can show you! I haven't dabbled in paint for a number of years and for some reason I thought it would be a good idea to paint the three troublemakers in last night's episode of War and Peace. I think for a beginner they are OK, but hopefully with some practice I might get better! 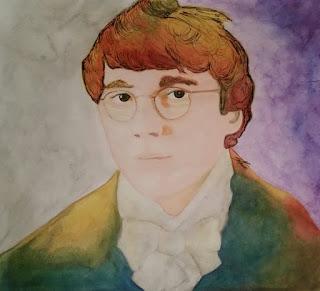 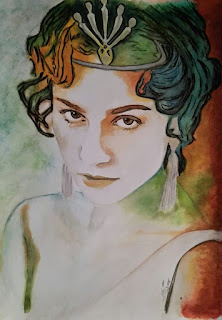 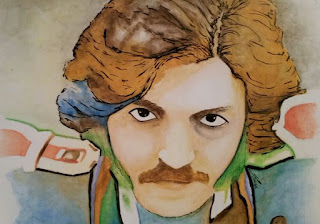 So seeing as I've started on the War and Peace theme, I may as well give my opinion on the third episode!

Well I did as I suggested last time, I (figuratively) threw the book away! Within minutes I'd picked it back up again, because this time I was squealing with delight and needed to double check a couple of things which were said! The dueling scene came very close to what was in the book, however I didn't expect for one minute that they would keep the part in where Dolokov greedily bit at the snow before he raised himself to take a shot at Pierre. The way this part of the scene was carried out showed that Tom Burke has obviously acquainted himself with the book, or at least he's certainly read the parts that Dolokov features in!

Whilst we are not treated to the full extent of Dolokov's relationship with his mother during his convalescence, it is hinted that Dolokov the brawler and and bully is indeed an affectionate character, or at least when it comes to his mother and sister. In the book there is a wonderful passage which describes the way his mind works and helps us to understand his behaviour a little later in the episode after he has proposed to Sonya. "I know people consider me a bad man!" he said. "Let them! I don't care a straw about anyone but those I love; but those I love, I love so that I would give my life for them, and the others I'd throttle if they stood in my way. I have an adored, a priceless mother, and two or three friends- you among them- and as for the rest I only care about them in so far as they are harmful or useful. And most of them are harmful, especially the women. Yes, dear boy," he continued, "I have met loving, noble, high-minded men, but I have not yet met any women- countesses or cooks- who were not venal. I have not yet met that divine purity and devotion I look for in women. If I found such a one I'd give my life for her! But those!... and he made a gesture of contempt. "And believe me, if I still value my life it is only because I still hope to meet such a divine creature, who will regenerate, purify, and elevate me. But you don't understand it."

The book details how Dolokov has fallen in love with Sonya and makes every excuse possible to come to the house in order that he may see her. Over this period Dolokov is at the house more and Nikolai less and less. By the time Christmas arrives and Dolokov proposes it is obvious that he has lost his heart to her, so to be refused in such a pointed and definite manner was obviously going to have an effect and this was played out brilliantly on screen. Back to the rogue, the devil, the villain of the piece! It's a shame that the two sides to Dolokov's character were not looked at in more depth, but I think most people watching the show would gather from the subtle nuances that Dolokov had indeed fallen in love with Sonya, it wasn't just to be another one of his conquests! I believe that Dolokov actually craves some love and attention. We know how much he ensures that his mother and sister are looked after, but does this mean he has always been the caregiver whilst growing up, and not been given the care, love and affection that he required? Perhaps he hoped if he could find a woman who was pure and loyal, and Sonya certainly ticks both of those boxes, she would ensure that he didn't need to be the bad boy that we are see, and the softer side of Dolokov would surface properly.

I have to say that this is the episode that Paul Dano began to shine as Pierre. In the first two episodes I thought him a rather feeble and drippy version of the Pierre I had known in the book, but this episode showed the different facets of his character. He is an honest character, pure of heart and simple and direct. The scene with Helene was eye opening as he grabbed the marble table top and smashed it to the ground; I honestly didn't think he had it in him to shout at her like that! (Speaking of Helene, I would just to to say at this point I am jealous of Tuppence Middleton. I have serious dress envy going on! I thought the white dress she wore in the first episode was gorgeous, but as the series has gone on, more and more gorgeous frocks come to light. It's not just War and Peace either, she's got some lovely costumes in Dickensian too! I fear I my have to get the sewing machine out and make some modern clothes inspired by the ones in War and Peace!)

I'm glad that we were only treated to a small portion of the Freemasons, it becomes a little overdone in the book, whilst it appears to be a somewhat random piece in the show, it is one that helped show Pierre's growth as a man. So far he has done nothing with the fortune he has inherited, now he is about to do good by visiting his tenant farmers and various estates and having a good old heart to heart with his best friend Prince Andrei! This heart to heart doesn't delve very deeply though, and at the Tsar's ball we can foresee that hearts are going to break whilst others flourish.

The meeting of Natasha and Andrei was set in spectacular scenery, and it was beautifully shot but I am still having issues identifying Natasha as this person who inspires desire from people. Desire for women to be like her, desire from men to love her. She is portrayed as a sickly sweet teenager and I can't say I'm set alight by Andrei either. He is emotional honest, somewhat detached from life and is generally unable to forge lasting meaningful relationships with people, so I find him a difficult character to read. As two of the main characters of the story, I can't help but feel that they are completely out-shined by the likes of Helene, Dolokov, Nikolai and Denisov, even when they have a whole opulent scene to themselves! It seemed rather bizarre that in such a short space of time, a man who is so void of emotion can suddenly fall head over heels in love with a giggly school girl he's just waltzed around a ballroom with. I felt so sorry for Pierre in the closing scenes as those slight flickers in his eyes betrayed him as he spoke with Andrei. As Andrei declared his undying love for Natasha, we realised how much Pierre, who has grown up with Natasha, has undeclared feelings for her too!

Roll on next week! I have to say I am now loving the series, episode three has definitely brought me around, and I'm sure episode four will bring with it some fantastic surprises.
drawing Home Tolstoy Tom Burke War & Peace