What secrets lie in Venice? (The Venetian Contract by Marina Fiorato)

January 09, 2016
I saw The Venetian Contract in a second hand bookshop and only bought it because it was about Venice, my second favourite city in the world!

My first trip to Venice was in 2007, it was a couple of days after my dad had died, and my brothers refused to allow me to sit and wallow in self-pity. I went in February, the time of the Carnevale and I was swept up in a world of mystery, costume and masked beauty. Obviously my mind kept wandering elsewhere, so a year later I went back, once again to take in the sights of the Carnevale, a must see wonder for anyone who loves costume and history. I have subsequently returned to Venice, not at Carnevale time, and the place still holds a special magic and place in my heart.

This book is set in 1576 and tells the story of a Turkish stowaway who arrives in Venice. With her arrival, the Turkish ship also sets down an unpleasant gift to the city, the bubonic plague. In order to treat the city, the Doge of Venice commissions the architect Andrea Palladio to build a great church so that God will save the city. (Palladio gave his name to the ubiquitous archetectural style in the world, Palladianism). 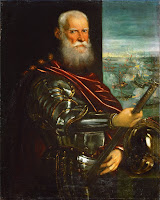 Prologue. "Sebastiano Venier, Doge of Venice." Oh you have to be kidding me! Those first five words already inform me that he was the Doge during the time of the Battle of Lepanto as shown in this painting by Tintoretto.

Where else have I heard about the Battle of Lepanto?  Scenes From An Execution by Howard Barker, a play Tom Burke starred in! I remember years ago playing the game "Six Degrees of Kevin Bacon", these days the game seems to be "One Degree of Tom Burke!"


A couple of pages later, the six plague doctors of the six sestieri's (areas of Venice) arrive at the Doge's palace with remarkable medical advice such as putting a live pigeon in a patients groin. The Doge found the physicians to be charlatans, buffoons, each one thinking that they were more important than the next one! "These doctors could not help Venice. They would dispense their potions and remedies , make gold along the way, and some citizens would live and some would die." These doctors sound like those in the Dr's Dilemma (George Bernard Shaw) and yes, I do believe Tom was in that too!

Anyway, back to the book, the Venetians had beaten the Ottoman's at the Battle of Lepanto, and this book is set a few years later and the Ottomans wish to wreak revenge on Venice. This is a beautifully written book which transports you back to the calles of Venice. You can sense the confusion of the Turkish heroine as she tries to make her way around the city, getting lost down dead end passageways and walking around in circles! It also gives you a taste of the historical Venice, at Carnevale people walk around wearing the Dottore's Mask (doctor's mask shaped like that of a birdman) the beak of which was stuffed with herbs to ward away the miasma of the plague, but more likely the smell of putrefaction. There are many islands surrounding Venice, some well known, Murano the glass island and Burano the lace-making island, but this book also tells us of the lesser known island of Lazzaretto Novo, or the quarantine island. In the 1570's, known as the Plague years, the Venetians were terrified of the disease being brought to their shores. Crews from boats would disembark at the island, walk through a lime pit, and the items on board would be removed and smoked to kill any chance of the Plague. The crew would live in almshouse for forty days (hence the origin of the word quarantine) and once they were declared healthy, they and their goods were allowed to continue into the city of Venice.

As Plague takes hold of the city, the Doge commissions the architect Palladio to build a church on the island of Guidecca. One that would be so magnificent God would save Venice! In order to keep Palladio alive, the Doge also commissions the greatest doctor in Venice to keep Palladio alive. Whilst he has a greater knowledge of medicine than his fellow doctors, he finds that the Turkish stowaway who crosses his path can teach him that the medicines of east and west work better when both sets of knowledge are combined!

Whilst this is a piece of fiction, it does take in historical elements, and it has made me want to return to Venice so that I can visit Palladio's church on Guidecca, and perhaps to swish around St Marks Square at Carnevale in a costumed dress and mask! 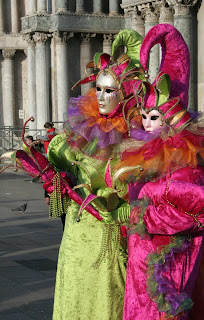 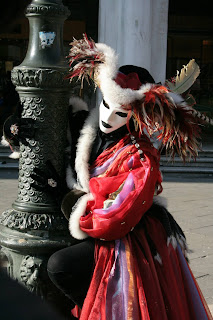 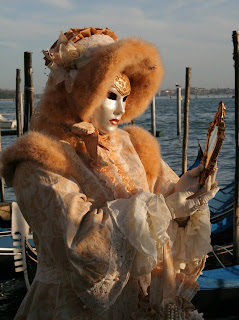