January 24, 2016
I've read a few articles recently whereby people are supposed to feel guilty because they haven't read a book which is considered a classic. As far as I'm concerned, so long as you're reading something and using your mind and imagination, I don't think it matters whether the book is a classic or not. Whilst on that note, what makes a classic a classic? Who defines what a classic is, and are they correct when they put a book on "the list?" There are far too many books out there for us to read them all. So my advice is not to worry about whether you have read all the books on the "books you should have read list", read the ones that a friend has read and recommended to you if you think it sounds good, or one that appeals to you for whatever reason, even if it's only because you like the cover...you could surprise yourself!

Many of the books that appeal to me are often considered classics, so with this in mind I'm taking part in this years #2016ClassicsChallenge ( https://theprettybooks.wordpress.com/2015/12/27/2016-classics-challenge)   I am also raising funds for charity whilst completing this challenge and I have set up a JustGiving page to raise funds for Box Clever Theatre Company, details on my JG page!
https://www.justgiving.com/Susan-rogers3  I need to read one classic book a month and blog about it... let the challenge begin! 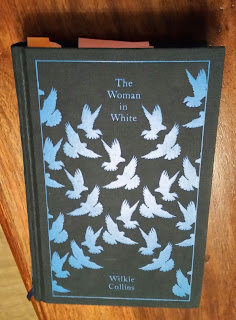 I had heard about this book years ago. The Woman in White was considered groundbreaking when it was first published. It was a piece of Victorian fiction which fused together the apprehension felt in a Gothic horror novel with psychological reality. It is helpful if you can submerge yourself into the mind of the Victorian reader when taking on this book. In November 1859, readers of Charles Dickens' periodical All The Year Round were finishing the serialisation of A Tale of Two Cities, and being introduced to a new piece of serialised fiction which would have them enthralled until August 1860. Despite its unsavoury themes, The Woman in White was due to be a huge sensation.

As a fan of all things Gothic why had I not read this novel? Well as I say at the start of this piece, there are hundreds of books out there and you can't read them all. So why choose to read it now? I was passing through Homesense and saw that they had a cloth bound Penguin Classic sitting on a shelf imploring me to buy it! It was as simple as that!


"This is the story of what a Woman's patience can endure, and what a Man's resolution can achieve".

Now that I have read the book, I think if you haven't read this novel you should feel a little guilty! Not because it is considered a classic, but because it is a beautifully crafted novel. It takes you on a journey of discovery, bringing the terror previously read about in far reaching fictitious castles, to a terror on your doorstep. It has a dark plot centered on murder, insanity, incarceration, treachery. It showed the dark underworld of Victorian society and the possibility that it was possible for the well admired and respected nobility to be responsible for the poisoning of a husband, for instance, in order to claim his estate and take on a younger lover! We don't know what goes on behind closed doors, but the possibilities are endless and Victorian society fed on this manner of criminality. The Victorian era showed a rise in consumerism. More books were being published and the Great Exhibition of 1851 at the Crystal Palace in Hyde Park fed peoples desires for manufactured products and it was influential in educating people about the arts. Public shows were bigger due to advertising in the national press. Today the public seek their thrills by going on bigger and faster rides at theme parks, in the Victorian era thrill seekers would watch death-defying tightrope walkers or scare themselves at freak shows; children would read Penny Dreadfuls, badly written stories about pirates and dastardly highwayman! The Woman in White was consumed eagerly by the public and is still reknowned for creating a thirst for sensensational novels.

The Woman in White was initially written as a periodical and was more than likely inspired by the works of the French writer Maurice Mejan. Wilkie Collins was a close friend of Charles Dickens, another author we know who used to write his stories on a weekly basis rather than the novels we see today. These periodicals were the soap opera's of the day. Instead of sitting around the table asking who shot JR, Victorians were betting on the outcome of the stories, who did what to whom. The novel actually led to merchandising, ladies could spray themselves with Woman in White perfume, buy Woman in White cloaks, even music was specifically written for Woman in White Waltzes. Even Dickens himself had not had this amount of random publicity!

A series of witness statements.
What is clever about the novel, and unusual, is that we don't have one narrator telling the whole story, we have a series of witnesses to a crime. Just as a judge hears a persons piece of evidence and draws a conclusion, so does the novel take on the story from one narrator to another. Because we have to rely on each persons statement, how can we be sure that all parties are telling the truth? We have to draw our own conclusions as we read the story. Which witnesses do we trust? Who can we rely on and who is trying to salvage their reputation? This experimental use of all of the characters in the book telling their side of the story ensures that the novel moves on at a pace. We want to know how all of these characters interact, and whether we can trust their accounts. We need to be aware that not everything is always as it seems!

You will note that this is a strange type of review, in that I haven't told the premise of the story, or detailed the characters involved. There is a reason for this. Wilkie Collins in his preface to the book requests that reviewers do not tell the story second-hand. I can understand why he asks this. He has written the novel carefully so we meet the correct characters in the correct order suppressing important linkages until they need to be unearthed. If I started informing you how the novel runs and who does what to whom, the integrity of the novel is lost. The reason why you want to read the novel is because you are curious about who the Woman in White is, and you want the excitement and surprises to be revealed just as the author wished them to be.

The writing of the novel might be of a bygone age, but it is detailed and poetic. The descriptions are so complex that you can envisage what was going on in Collins' mind; you are figuratively standing in front of the characters, viewing them as though you are standing in the room with them. "The lady's complexion was almost swarthy, and the dark down on her upper lip was almost a moustache. She had a large, firm, masculine mouth and jaw; prominent, piercing, resolute brown eyes; and thick, coal black hair, growing unusually low down on her forehead. Her expression - bright, frank, and intelligent - appeared, whilst she was silent, to be altogether wanting in those feminine attractions of gentleness and pliability, without which the beauty of the handsomest woman alive is beauty incomplete. To see such a face as this set on shoulders that a sculpture would have longed to model..." Great attention is paid to the sound of the novel, this is what gives it the creepy edge when reading it. If you don't know what I mean, try reading the passages out aloud, rather than quietly in your head!

When it was written, the novel had the ability to make the hairs on your arms stand on end and the heart to beat a little faster. Modern society has been desensitised so we don't feel fear in the way Victorians would, however, that is not to say that the novel doesn't still have its place today and it is a novel which would be great adapted for the winter TV schedule. A theatrical adaptation was made in 1871, so it should be something a good dramatist could put on for a modern TV audience!

I would recommend this to anyone who enjoys historical novels, who likes a bit of mystery and wants to be captivated to the very end of the book. It is more of a psychological book than a terrifying horror story.  The book caused excitement when it was first written, and despite being over 150 years old, it echoes themes that are still current. The possibilities of trust and mistrust are just as prevalent today as they were back then, and people today will be party to a crime if they believe they can benefit from it.