July 27, 2016
OK I lied. My break from Rattigan didn't last long. I heard that two of the actors from Musketeers were performing in While The Sun Shines. I scoured bookshops for the play text to see if it would be worth making the long trek to Bath to see it, and whilst it's not in print at the moment, I did manage to track down an old copy of the play. I'm like a dog with a bone, it doesn't matter how long my search takes me, I WILL find that book I've been looking for!

I howled with laughter when I read the play, but I was still put off organising a trip to Bath. Why? It's a 460 mile round trip for a start. Hotels in Bath are very expensive, and the train journey is both long and expensive and there are no through trains. I talked myself out of going. Plus the play was only on for three weeks, I couldn't go on the first or last week soooo.....no point in trying to sort out a trip down there. I was a bit doleful about this, but it was only a play I was missing.

This is entirely reckless of me I know, but I couldn't let it go, I really wanted to see this play. I'd enjoyed reading it so much and had fallen in love with Rattigan; I just had to see it.  I checked the theatre website on Friday and there was a ticket shouting out my name for the Saturday night, so I bought it and decided "boll***s" to it, I was going to drive down. I convinced myself it wasn't that far, I'd be there in 4 hours no problem. Next thing to do was to find a hotel...I was not paying hundreds of pounds for one night so I found out that you could stay B&B at Bath university for about £35 in an en-suite room. En-suite? Student accommodation? Things had certainly changed since my day as a student.

(Mood lighting by my bed...seriously this is university in the 21st century)

I filled the car up, grabbed my travel mug of tea, popped on some groovy tunes and hoped the time would fly by. It took 6 hours to get to Bath, the M5 was just a glorified carpark and I hadn't packed enough CD's! Fortunately, I had left early enough in the morning that I had plenty of time to calmly find my digs. It was really nice, very comfortable, with a TV, USB ports and coloured "mood" lighting, plus my own bathroom, and a shared kitchen with tea making facilities and fridge/freezer. Total luxury, almost made me think about going back to university!!! I headed onto Twitter to see what was going on in the world and someone mentioned that they knew a couple of my friends were going to the play, so I got in touch to see if we could all go together. It was great to have someone to share the antics of the night with, but even better, they were staying at the uni, so we could also head out together around Bath on the Sunday too.

Blinded by such beauty...

The Theatre Royal in Bath is the most exquisite theatre I have been to in a long time. It is stunning. I was craning my neck looking round at the architecture, my eyes on stalks as I tried to capture all of the ornate details. It was just like going back in time, a proper oldey worldy theatre. The only thing that let the theatre down was that they didn't have any programmes, just a black and white flyer. It was a good job I had taken my "antique" copy of the play with me...just in case I saw any of the actors after the show. 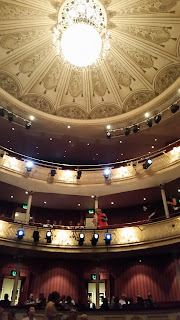 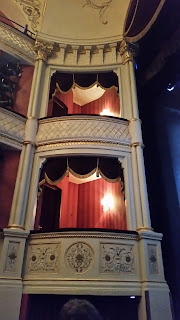 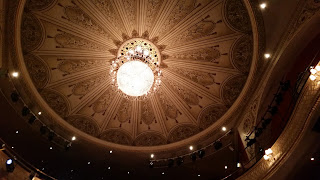 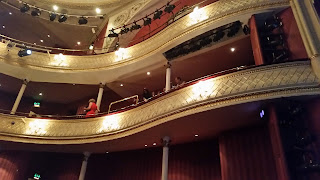 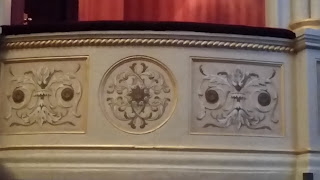 From the moment the curtain rose it was a laugh a minute, and by the time the show had ended my ribs and my cheeks were hurting. I just couldn't stop smiling. It was a slick production with the actors seamlessly rolling from one misunderstanding to another. It was pure farce and a great way to spend the evening, especially in these troubled times. It is somewhat ironic that the play was originally performed around the backdrop of a world war when people were pulling together through difficult times, and now we were enjoying it during a period where there isn't a day going by when there isn't another tragedy reported on the news.

The play takes place during one day in the apartment of the young Earl of Harpenden (Bobby) a rather hapless fellow who is never going to be distinguished in his naval career and still needs his butler to tie his shoelaces. He is due to marry Lady Elizabeth, a beautiful but rather dim young lady; another member of the landed gentry, who lost her stripes in the WAAF by leaving some important papers in the ladies loo.

A little bit "cheeky" in more ways than one!

The cheeky tone of the play is heralded from the beginning when the butler wakes his master, and a naked American soldier appears from the master's bedroom! Bobby felt sorry for Joe who had got rather drunk and had nowhere to stay and so he let him sleep at his apartment, but Anglo American relations were about to become strained when after Bobby arranges for a flirty friend to be a companion for Joe, Joe mistakes Bobby's fiancee for Mabel, the flirty friend.

I didn't quite envisage Bobby being such a nincompoop, however, I found that Rob Heap's portrayal was both endearing and enjoyable. He was like an excitable, exuberant child and showed a marked contrast to Rupert Young's Lt Mulvaney (Joe). Ali Dowling positively shone as the beautiful yet calamitous Elizabeth. It was easy to see why she ended up with three men vying for her attention. One of the most hysterical parts of the play was the young men throwing craps to see who would win the chance to propose to her first! The Duke, her father and played by Michael Cochrane (who Musketeer fans might remember played the judge who sentenced Porthos to death in The Homecoming) was bombastically hilarious. At first he was outraged that the men were gambling for his daughters hand, but then he is succumbed like all gamblers by the lure of the dice and joins in with them, taking the game to a whole new level!

The fall of the aristocracy, and the makings of the common people...

Christopher Luscombe directed a bright and breezy romp through the doomed aristocracy. You can see the decline of this social populace in favour of the brighter younger generation. The down to earth Mabel Crum, played spiritedly by Tamla Kari, gives us an insight into how those of a lower social standing can take advantage of the buffoons with money. Rattigan, in the midst of the madness of the play, cleverly intertwined the demise of the elite following the war, and how the forward thinking working classes were about to take the upper hand. Mabel might not have money, but she is astute, and you can't help but want to give her a cheer when she gets what she wants! 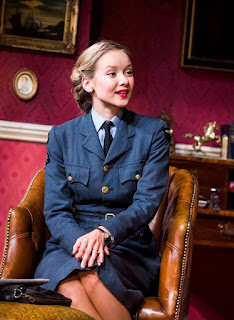 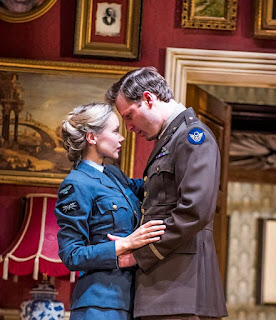 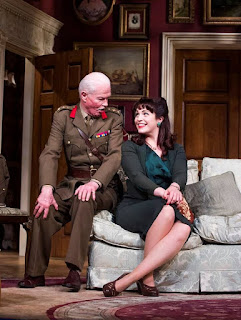 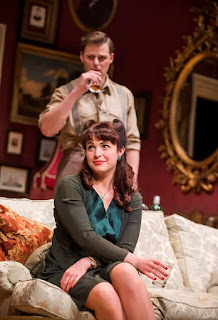 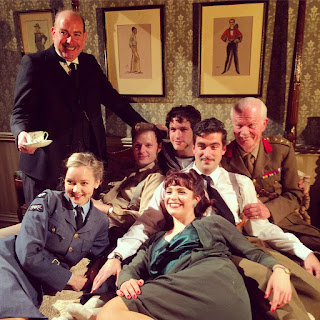 As per all of his plays, Rattigan had a deeper message to tell, and whilst this wasn't a deep and heavy drama like Flarepath and The Deep Blue Sea, it was Rattigan's most commercially successful play when it was first staged, and I can see why. I can not believe that this adaptation hasn't been given a longer run, or that it's not going to tour so that other people can experience the same sense of enjoyment that I was lucky enough to observe.

Thank you for such a wonderful night of entertainment

After the show we headed round to the stage door, where we found another Burketeer loitering! It's such a nice fandom to be part of, you can almost guarantee you'll meet someone or other who if not a specific fan of Tom's is a fan of The Musketeers in general. I bet when Adrian Hodges came up with the idea, he never would have thought it could create such enduring friendships...anyway, I'm digressing.

The first person to appear was Jonathan Dryden Taylor who played the butler Horton with such aplomb. I'm not sure if we actually popped his autograph cherry or not, but he seemed genuinely pleased that we were vying for his attention and wanted to speak to him. Next to appear was Rupert Young who played the American Joe. He was rather taken aback that I'd given him a copy of the 1943 script to sign, apparently it was the first time the cast had seen a proper copy of the play, they had only been given some photocopies of the version of the play they were performing. 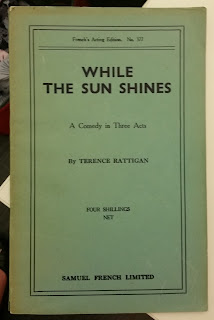 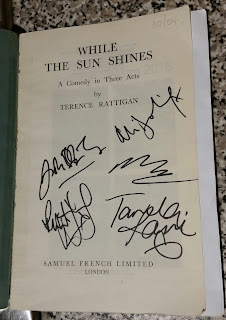 Next to appear was Earl "Bobby" Harpenden himself. Rob Heaps tried to sneak past us, but his bike was a bit too cumbersome so we noticed him and shouted for him to come and talk to us. Finally Tamla and Ali appeared. We had a chance to chat to them and take photo's, although I preferred to take the pictures rather than to appear in them. They were both so amiable and chatty, it was a real pleasure to meet them. Ali commented on the play book and I said, "oh you won't remember me, but at the Newcastle Comic Con in November I was the one who had located an antique book called Tom Burke." I do remember you she said. I was positively glowing inside; then later I thought I hoped she remembered me for nice reasons!!!

Sadly I didn't catch up with either Nicholas Bishop or Michael Cochrane which is a shame because it would have been nice to tell them how much I enjoyed their performances too. It was such a wonderful night, with magnificent performances that all the cast and crew should be justifiably proud of their achievements.