January 12, 2017
It had to be didn't it? Well how can you do a Classic reading challenge and not have any Dickens on the list?

Christmas, a time to bring in the holly and ivy, put decorations on a tree, fill up on turkey and mince pies, and watch terrible TV whilst ripping garish coloured paper off numerous presents! Surely there's more to Christmas than that!

In today's overly commercial society, it does us good to curl up with a copy of A Christmas Carol, and journey with the lead character, Ebenezer Scrooge as he is visited nightly by ghosts and shown his Christmases past, present and future.

Dickens' novel contains a plethora of characters who exhibit many different qualities, some good, and some bad. The book is essentially Scrooges journey from being a self-centred miser to his awakening, where he becomes a warm-hearted, caring human being who thinks of those less fortunate than himself. It's a book that shows that there is more to Christmas (and life) than seeing who can spend the most money on each other, but that we should try and spend what precious time we have with friends and family and to think of others, not just ourselves.

A Christmas Carol is probably one of the most popular stories in the English Language. It has been reincarnated on screen over and over again, ensuring new generations get to know  about the tale of Scrooge. I can remember being about 10 years old when my dad took me to the old ABC Regal cinema in Chester (now a Costa Coffee and Primark!) to watch Disney's version, Mickey's Christmas Carol. Other generations will favour The Muppets Christmas Carol, or newer generations will be familiar with Jim Carey's incarnation, but despite watching the films, or theatre productions, how many people still sit down and read the actual words of Charles Dickens?

The tale commences on a bitterly cold Christmas Eve, Ebenezer Scrooge is in his counting house, counting out his money. His clerk Bob Cratchit is shivering in the cold office because Scrooge refuses to pay for coal for the fire. Scrooges nephew pops in to invite his uncle to his Christmas party, and two men ask Scrooge for a charitable donation, but Scrooge responds to both with a hostile retort.

As the night draws in and Scrooge heads for bed, he is visited by an apparition of his dead work partner Jacob Marley. Marley informs Scrooge that due his greedy and self-absorbed lifestyle, he is condemned to roam the earth for eternity. He tells Scrooge he has come to help save him from the same fate. He warns Scrooge that three ghosts will visit him over the next three nights, and no sooner has Scrooge fallen asleep, than he is woken by the fist of his visitors.

The Ghost of Christmas Past descends and makes Scrooge revisit his past, to a time of childlike happiness, his school days, his apprenticeship and his engagement. The next evening Scrooge is visited by The Ghost of Christmas Present takes Scrooge on a trip through London, to Bob Cratchit's house where the family is gathered together making the most of what little they have. He is then whisked to his nephews house where fun and frivolity abounds. The Ghost of Christmas Yet to Come is Scrooge's final visitor, and Scrooge is witness to a dead, unnamed man. He watches a poor couple in celebratory mood that the man is dead. He sees personal effects being traded for cash with no thought for any sentimental value. He then finds himself in a graveyard, and the tombstone reads "Scrooge".

Shocked at the way his life has played out, Scrooge desires redemption. He pleads with the spirit to change the course of his life. Scrooge then wakes up and decides he must turn over a new leaf. He sends a turkey to the Cratchit's so that they have a proper Christmas dinner, and extends the hand of friendship to his nephew, turning up at the Christmas party to the surprise of family and guests. As the years go by, Scrooge is a reformed character, sharing his wealth with those less fortunate, and sparing a kind word and thought for those around him.

>Dickens may have written the novel in 1843, yet over 170 years later, the novel is still seen as what the true meaning of Christmas is all about, and it can still make you stop and think about the less fortunate. The people who for whatever reason end up sleeping on the freezing cold streets, women's refuges, children's homes, the list is seemingly endless.

They think it's all over...it is now!

And so here ends my 2016 Classic Reading Challenge in aid of Box Clever Theatre Company.

I hope you've enjoyed reading my take on the novels I've chosen. As an avid reader, I actually thought this would be an easy challenge, but it's been far from it. To pick up a book and read it for enjoyment is one thing, to pick up a book knowing that you have to read it with the intention of writing about it is something different.

Books are often more complex when you start delving into what has been written. Why has the author said this? Why have they focused on that? Picking up on the subtle nuances on what is written is an artform in itself; it is very easy to miss an important passage because you're trying to speed read the book, or you're just tired when you've picked the book up at bedtime to get through a couple more chapters. These missing passages can totally transform your interpretation of the book.

We all have different life experiences which can cloud our judgement. One person's background will lead them to one viewpoint, someone else will see something entirely different. Does this make one person right and the other wrong? I don't think so. I have tried to pick a variety of books for this challenge, some I would normally choose, and some I wouldn't. This challenge has certainly been an education for me and made me want to read more by the various authors I have chosen.

My "twelve" entries in this blog are my reasons for reading these books. I have enjoyed them, but I haven't studied any of the books in depth. If I had the time and inclination I would read the books several times, and pull apart in minute detail some of the more pertinent passages. The blog entry would go on forever, and the original enjoyment of the book would be lost by writing and rewriting my arguments and points of view, (obviously backed up by relevant passages and quotations!!!) So I have just skimmed the surface of each of these books.  I hope what I've written makes you want to pick the books up and read them for yourselves. Some books you will like, some you may hate, but that is the joy of reading, challenging yourself to try something different, and to come to your own conclusions.

January The Woman in White by Wilkie Collins
February Barchester Towers by Anthony Trollope
March Jailbird by Kurt Vonnegut
April 1Q84 by Haruki Murakami
May The Brothers Karamazov by Fydor Dostoyevsky
June Flarepath, While the Sun Shines, The Deep Blue Sea, The Winslow Boy, The Browning Version, Harlequinade, Separate Tables, In Praise of Love and Before Dawn by Terence Rattigan.
July Three Plays ( Blood Wedding, Yerma and The House of Bernarda Alba) by Frederico Garcia Lorca
August Alice in Wonderland by Lewis Carroll
September The Cuckoo's Calling, The Silkworm & Career of Evil by Robert Galbraith
October Tarka the Otter by Henry Williamson
November The Hound of the Baskervilles by Sir Arthur Conan Doyle
December A Christmas Carol by Charles Dickens

It's not too late to still donate! 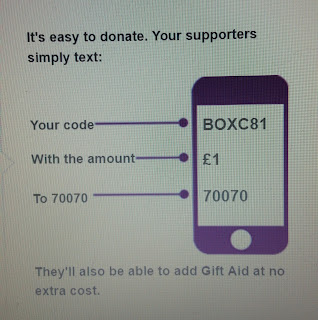