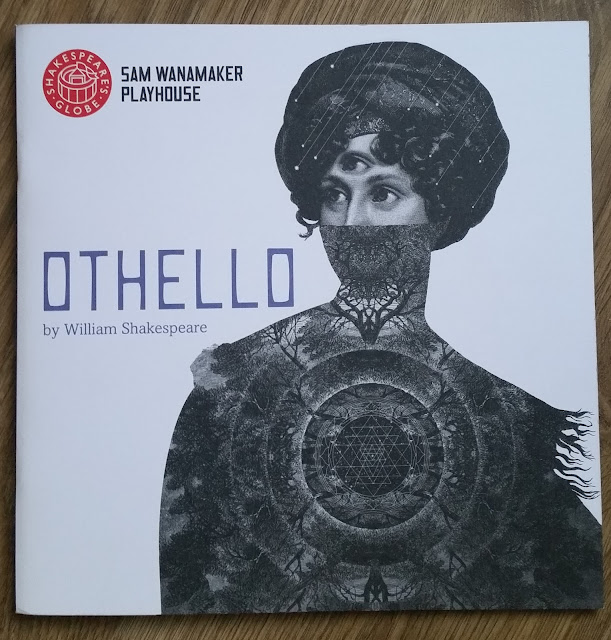 I’m sure I’ve said this before, but I LOVE the Sam Wanamaker theatre. Love, love, LOVE it. The theatre is a wooden intimate box, filled by candle light. When all of the candles are ablaze, a soft but bright light fills the room, as each candle is extinguished, the room takes on a darker, sinister feel. Unless you experience it, it is hard to imagine just how bright and powerful a candle can be.

Othello is the perfect play for this space; a tragic, darkly woven tale of manipulation and deception. It is set on the streets of Venice, and for anyone who has been lucky enough to wander those streets alone at night, you’ll know just how dark and scary those narrow streets can be to the overworked, imaginative mind.

The play commences with Iago and Roderigo discussing Othello. They despise him. Not only has Iago been overlooked as Othello’s lieutenant, but the love of Roderigo’s life (Desdemona) has secretly married Othello. From these first minutes of the play, you know things are not going to turn out well for poor Othello!

Iago, played excellently by Sam Spruell, is the archetypal villain. He pretends to be loyal to Othello, a man to be trusted, whilst behind Othello’s back he continues to scheme and plot his downfall. This starts by Roderigo telling Desdemona’s father that his daughter has secretly married. Her father, obviously furious at this news, believes that it must have been witchcraft, not love that ensnared her. Iago “loyal” to Othello, makes a scene, threatening Roderigo for causing such destruction between a father and daughter, but when left alone the truth wills out…Iago confesses to the audience his utter hatred of Othello. 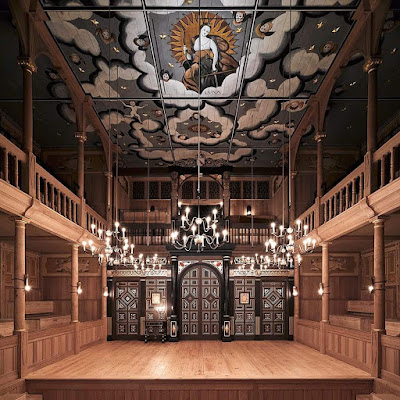 Othello is sent to Cyprus to fight against the Turks, Desdemona is allowed to travel too, but she arrives separately. Iago notices the close friendship between Desdemona and Cassio, and believes he can use this to his advantage to break up Othello’s marriage. As an aside, Iago comments that he believes that Othello has had an affair with his wife, Emilia, who also happens to be Desdemona’s maid. Emilia, played by Musketeer actor Thalissa Teixeira, notices that Desdemona has dropped her handkerchief, a present from Othello, she secretes it about her person and later hands it to Iago who has asked her to steal it.

Iago manages to convince Othello that he has seen Desdemona and Cassio together, and that Cassio now has the handkerchief, the token of his affection. When asked to produce the handkerchief, Desdemona finds that it is missing and Othello is outraged. Cassio finds the handkerchief planted in her room, and asks her mistress Bianco to embroider one like it. (Cassio in this production is played by a woman, Joanna Horton.) Bianca tries to return the handkerchief to Othello, but he sees this as further proof of Desdemona’s infidelity calling her a whore and striking her, furious of her adultery.

Emilia begins to suspect that things may not be as they seem; that someone is deliberately trying to outrage Othello. Back on the dark streets, Roderigo attacks Cassio, Roderigo is wounded, but before Cassio can escape, Iago catches and wounds her. He sends word to Emilia that Roderigo is dead and Cassio hurt, and she is to deliver the news to Othello and Desdemona. Still proclaiming her innocence, Desdemona is suffocated by Othello. Emilia finally finds her voice to explain about the handkerchief, and realises that her husband is a villain and not to be trusted. Iago silences his wife and tries to flee. The enormity of what he has done and the turn of events devastates Othello who stabs himself in despair.

I have never seen a production of Othello before, so I cannot compare it against anything else. I wanted to watch this production because I had watched Thalissa in The Musketeers and thought her a compelling actor to watch. She did not disappoint, but then, no-one in the cast did. I am a conflicted Shakespeare fan. I don’t believe The Bard should be messed with. His work has lasted about 400 years so he must have done something right, but then I will see tweaks here and there and think, well actually that worked rather well. 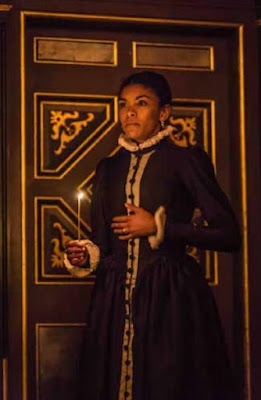 Andrew Scott’s Hamlet which I watched a couple of days earlier worked in a modern stylistic setting, and the use of some up to date touches in Othello also had me nodding in appreciation. The play starts with some annoyingly familiar music that I could not place. The tune has a resonance, the words sound well known, but it is being sung with a slow tempo in a medieval style. It’s annoying that I can't place it, but it's not detracting from the play. What was distracting however, was the celebrations that were held for beating the Turks and Othello’s marriage. A karaoke machine was produced, and as all the actors danced the night away, Emilia headed over to where I was sitting; she sat in front of me, looked down at me and said “I hate this music.” I’m not entirely sure what else she said; I was suddenly in a vacuum. I couldn’t hear anything. I couldn’t register anything. Thalissa, the person I had come to see was sat RIGHT NEXT TO ME – TALKING AT ME. I was dumbfounded!

After the interval I had pulled myself together enough to bear witness to the destruction of so many people’s lives because of jealousy and selfishness. This production weaves between the jealousies of the old world, and a more modern interpretation. Not only is Iago jealous of Cassio being promoted ahead of him…in this production he has also been usurped by a woman. Othello, likewise, is angered by his wife’s supposed infidelity, but she is having an affair with a woman. (I guess after watching ‘Who is Sylvia?’ the night before he should have been pleased it wasn’t with a goat! – On that moot point, there was a line in the play which said “Is he a goat or a monkey?” I did well to stifle the laughter – reader, you would have been proud of me!) 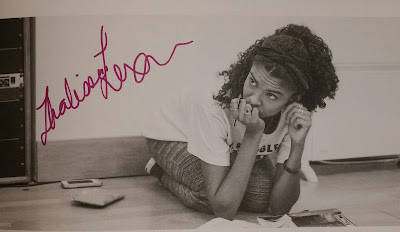 This was no insipid production. Desdemona had a fire about her, she was not the one in the wrong and by hell she wasn’t going to go down without a fight, she would kick and struggle until her last breath. The same is to be said of Emilia. Once she finds her voice, realises her husband is deceitful and the cause of so much heartache, he voice rings out rich and true. In the hushed candlelit glow of the stage, a sickening noise rings out, as Iago ensures her voice is silenced for good.

This was a superb introduction to Othello for me. The atmosphere of the Sam Wanamaker Playhouse was perfect for this darkly disturbing play where physical and mental destruction was at the fore.


Finally it hit me on the train home…Lana Del Rey – Video Games. That’s the song that was haunting me. Video games and a karaoke machine in Shakespeare’s world…wonder what he would have done with them!
Home London Theatre Shakespeare Theatre Reviews