All My Sons – Arthur Miller (The Old Vic, London) 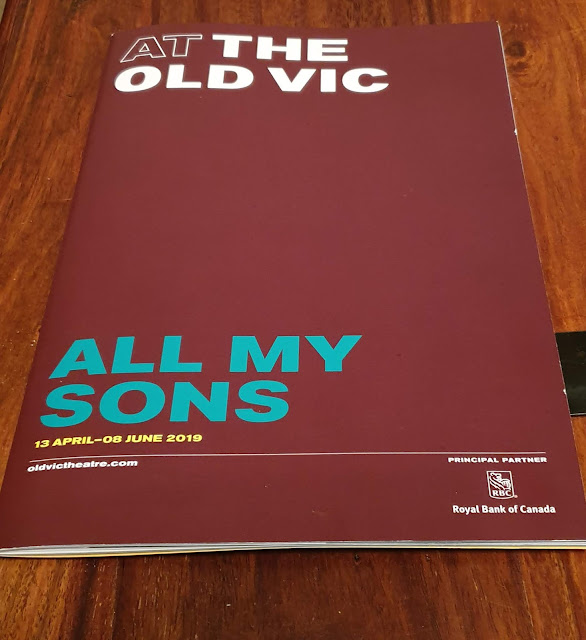 If you’ve read The Crucible blog, you’ll know I was really excited to see All My Sons. As I’ve said previously, I’m not very familiar with Arthur Miller’s work, so in preparation I made the mistake of watching a previous version of the play (available online) starring David Suchet and Zoe Wanamaker. It was fabulous!

Based upon a true story that Miller’s mother-in-law had seen in an Ohio newspaper, Miller wrote All My Sons in a vain bid to write a commercially successful play. All My Sons appears to be heavily influenced by Henrik Ibsen’s The Wild Duck, a play whereby a family has various skeletons in the closet which have to come out! In Miller’s story, two American business men conspired with army inspection officers to approve defective aircraft engines built for military use.

Money talks in this play… Joe Keller (Bill Pullman) has been exonerated of knowingly shipping damaged cylinder heads to the American air force, which have contributed to the deaths of 21 pilots during World War II. Instead, he blames his partner
and former neighbour Steve Deever of being solely to blame for the tragic events. His wife, Kate, played by Sally Field, lives in denial. She knows that in reality Joe is to blame, but she can’t admit it, neither can she admit that one of her sons, Larry, who has been missing in action for three years, is dead.

Their other son, Chris, returned home from the war a couple of years before the play begins, has asked his former neighbour Ann Deever to visit him with a view to proposing marriage. This is made difficult by his mother’s interfering and insistence that Larry is not dead, and that Ann was, and always will be Larry’s girl. The “pretty, beautiful Annie” does arrive. She has washed her hands of her imprisoned father, and whilst she arrives to marry Chris, she also comes with the added baggage of knowing the truth about how complicit Joe was in the shipping of the cylinder heads.

In a time when we are all bombarded with lies masquerading as truth, whether it be social media, news, governments etc, it seems like a timely reminder that our moral codes have slipped and that maybe we should take a step back and take a good look at ourselves. The play should therefore be a gripping yarn, and after taking one look at the set you think you’re in for a real ride. The set is a natural suburban house and garden which proceeds onto the set as the story starts and recedes into the background as it ends. In the set you see the hopes and dreams wax and wane of a family that have stuck together, when if the truth had been told, they would have fallen apart years ago. 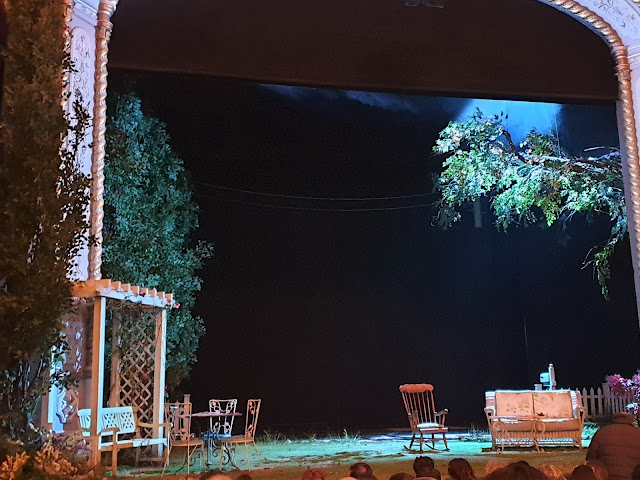 When I watched the online version I was hooked, but I have to be honest, I found myself yearning for the interval in this rather slow-paced production. I found Bill Pullman rather one dimensional and lacking in any conviviality. He should be the guy who you want to spend a night with having a beer and chatting the night away, the guy who you would be shocked to find hiding such a sordid secret, but he’s not. His story comes as no surprise, and frankly I didn’t really care about him or his “ethics” at all, all I could see was a man who didn’t think he’d done anything wrong, and more importantly he didn’t seem to care either. He was a businessman; business comes first before anything else, including friendship, who cares what is right and what is wrong?

I found Sally Field as Kate much more rounded in character and I empathised with her struggle to accept the truth. She knew in her gut what had happened, both with her son and her husband, but facing the reality was too much of a struggle for her. She managed to keep up this nervous anxiety by constantly finding things to fiddle with, and whilst you knew she should put moral principles ahead of anything else, you could understand why she wanted to put her family first instead.

Following the interval, the play did thankfully pick up some pace but the principal males still mumbled their lines and adopted a casual laid-back attitude, in fact at times I just wanted them to quit their whining and just get on with things.

I thought Jenna Coleman put in a solid performance as Ann, but I couldn’t really see any chemistry between her and Chris (Colin Morgan) and I found it hard to believe she’d wait three years before either telling the family the news she had kept back, or indeed that she would want to marry into the family given what she knew!

The play was enjoyable, but considering the headline names, it didn’t have the big, strong performances you would expect, it just loitered along for my taste. It was an ambivalent production, a bit like the suburban society it portrayed.