May 04, 2019
“Nothing is forever in the theatre. Love or hate, success or failure…whatever it is, it flares up and burns hot and then it is gone.” 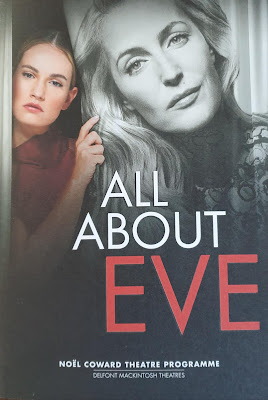 It’s true that people are often more interested in what goes on behind the scenes in the movies and the theatre, than what they see on screen or stage. Actors are a strange breed if you’re not living in their world…when you speak to them at the stage door are you really speaking to them, or are you speaking to another version of them? When they hug you and say, “it’s wonderful to see you again” do they really mean it, or internally is every fibre of their being screaming “oh dear God no, no, not you again!!!!”

There are those of us who think they must be fed up of us if they were honest, that they are just being polite, it’s just part of their job when they leave the stage door to smile and pose for pictures. Then there are those who genuinely believe the actor is as thrilled and excited to see them after the show, as they are to see the actor. And then there’s the Eve Harrington’s of this world, so honest, so sincere, but behind the laughter and the smiles they want something more than a hug and a selfie, and by God they’ll make sure they get it, even if it means riding roughshod over everybody.

Based on the 1946 short story The Wisdom of Eve by Mary Orr, All About Eve tells the story of how one obsessed fan manipulated her way into the life of the Broadway star Margo (Crane) Channing. Eve’s behaviour is rather desperate, her desire to become friends with Margo is all consuming,
but once she has overcome that hurdle and gained Margo’s trust, we realise that this devious minx has even greater aspirations than just becoming friends.

“Mrs Roberts, I’ve paid to see this play – from a balcony seat – over fifty times. Fifty-seven to be exact. Don’t you think that deserves one little minute of Miss Crane’s time?”The Wisdom of Eve

Well really, alarm bells should have been going off in both Miss Crane’s and Mrs Robert’s heads at that remark. If someone is stupid enough to go and see the same play 57 times that’s up to them and it shouldn’t give them anymore privileges than the person who could only afford to go once. Quite frankly I think they should have been calling the police and getting a restraining order served, but then you wouldn’t have had much of a play to watch, would you?! 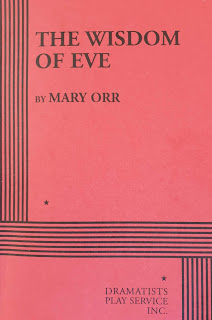 Many people will remember the 1950 classic film All About Eve starring Bette Davis as the aging, but highly acclaimed star, Margo Channing (renamed from the original book) and Anne Baxter who played Eve Harrington, the ambitious young fan who cleverly manoeuvres herself into Channing’s life. The film received a record 14 Academy Award nominations, winning six awards in total which included Best Picture and caused a stir at the Oscars when all four female stars were nominated as either Best Actress or Best Supporting Actress. It is considered to be one of the best films of all time, and when you see the remarkable performance from Bette Davis, it is easy to see why.

The problem with turning such an acclaimed film into a theatre production carries baggage with it. A stage production can never be the same as the film, and so it is a brave director who takes on the challenge. Ivo Van Hove is no stranger to the themes of this text however, he directed a film called Opening Night, which looks behind the scenes of a theatre company in the run up to opening night. It also shows the principal actress, Myrtle, having difficulty coming to terms with her role of an older woman desperately trying to hang onto her youth. Her feelings are confounded when she witnesses a young fan’s death shortly after giving her an autograph…as the film progresses, Myrtle spirals towards insanity confusing real life with the theatre. It therefore stands to reason that Ivo Van Hove would be excited to bring All About Eve to the West End.

“Fasten your seat belts, it’s gonna be a bumpy night.”

And I was excited too. Got my tickets pretty much as soon as they went on sale…my friend bought me The Wisdom of Eve for Christmas, and I watched Bette Davis on my TV growl “Fasten your seat belts, it’s gonna be a bumpy night.” But it wasn’t. Don’t get me wrong, I enjoyed the evening and I’m glad I saw the play, but I didn’t leave the theatre that evening feeling energised…I was more excited about trying to find a chippy.

On the one hand, All About Eve works because in general the cast are great and it is an interesting script based partly in the world of theatre and partly the greenhouse prison of life, where nothing is private anymore. Ivo Van Hove has carefully weaved this crossover into his play by utilising film on stage, however, I think the reliance on the filming becomes distracting. 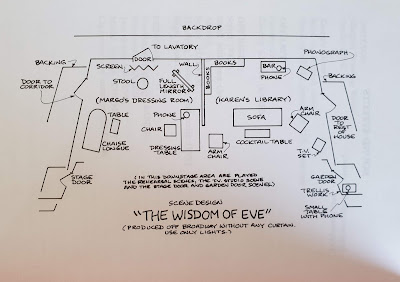 In the book, the stage is split down the centre…two rooms, Margo’s dressing room and Karen’s Library. As the action moves between theatre and home the lights fade on one side and go up on the other. In this version we have one room used as Margo’s dressing room and her flat. In the wings an area is set up as Margo’s kitchen, and a camera crew is following the action. Margo has no privacy, the camera follows her to her bathroom, we watch her sitting in her flat whilst we watch on screen the real action taking place in the kitchen. I felt a bit short-changed if I’m honest. I come to the theatre to watch theatre, and whilst I appreciate the use of film has enhanced some of the plays I’ve seen, here I felt it was an excuse to make the different settings a bit easier to put together. This was Van Hove showing off…his vision became more important than the actors on stage…and there’s an irony there when you think that back in the day, the director was always second fiddle to the star of the show!

There is no denying that Gillian Anderson is a great actress, but she lacked the gumption of Bette Davis in this role. It might seem unfair to compare the two, but when you have watched such an iconic performance it is hard not to. 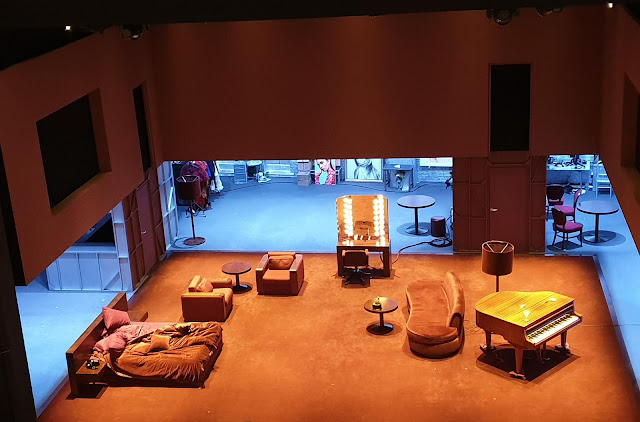 It is hard to imagine Gillian Anderson as the fading beauty, worried about her future career, she looked so stunning on stage. There were times you could see her strength and power as Margo when she raised an eyebrow or curled her lip in disgust to some remark, but this needed to be portrayed in the dialogue. There was a spark missing, somehow the relationship between Margo and Eve didn’t work. Margo Channing is a termagant, but in this production she was more the broken woman, taking solace in copious quantities of alcohol until her body had had enough and we watched it vomited back up in the toilet. This was completely unnecessary and underlined a theme throughout the whole play that both Eve and Margo owed everything they had to the strength of a man giving them the right opportunities.

Gillian Anderson carried with her the baggage of when she played Blanche Dubois in A Streetcar Named Desire. Margo had become insecure about the aging process, how was she supposed to play younger women when she was beginning to show the signs of ageing, why weren’t people writing plays about women of her age?!  Why was her writer only able to produce young women in meaty roles? She lacked any of the strength or anger found in the book or when Bette Davis played the role, instead she became this sorrowful, pitiable figure surrounded by an entourage who didn’t know what to do with her.

Lily James seemed to struggle with the role of the cleverly calculating Eve, hellbent on ensuring she will succeed in her ambition of usurping Margo Channing by becoming her best friend. The tale is, as the title suggest, All About Eve, but this production wasn’t. If anything it was all about Margo, Karen and Eve was somewhere in the background. She should have been the forefront of the role, cleverly mixing a “butter wouldn’t melt” persona with one of a steely determination to get what she wanted. 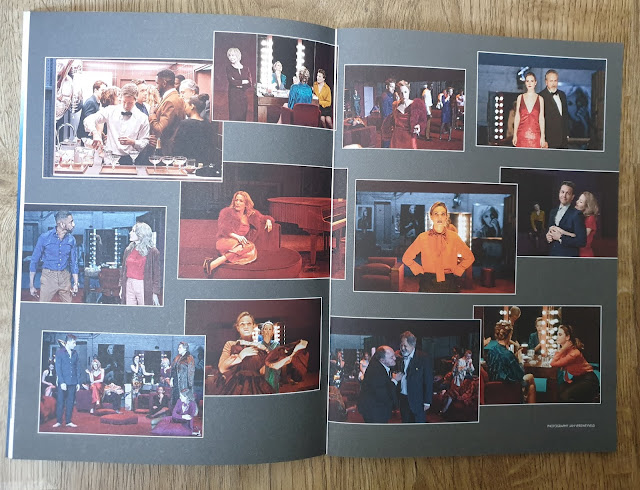 I know the play was based in America, but the story could just as easily have been set in the UK, and I wondered if instead of concentrating so hard on trying to perfect the accent, Lily would have been better off concentrating on the character.  I saw her vulnerability, her desperation to be famous but I couldn’t believe she had the tenacity to worm her way into a famous person’s life, let alone make it in the harsh world of the theatre. She had to have some guts about her to manipulate her way into a Broadway stars life, to make people believe she was a poor little girl who had suffered some terrible knocks in life, and to make the audience believe she was capable of such duplicities. To do that requires an incredible amount of self-belief and I felt Eve lacked that steely, calculated determination of the wolf wrapped up in sheep’s clothing.

Monica Dolan was without doubt the greatest strength of the play. She played Karen Richards, the best friend of Margo Channing, who unwittingly got herself caught up in a web of deceit. As the game rolled on around her it became harder and harder to stand up and tell the truth, to admit she was the reason Margo missed getting to the theatre on time, that she was responsible for giving Eve her big break, that she was blackmailed into ensuring Eve’s further success. When she was on stage, there were echoes of the cynicism, humour, and backstage bitchiness of showbusiness!

I did enjoy the cleverly crafted ending to the play. Eve had become the shining Broadway star she always wanted to be, but rather than partying with the rest of the crowd she returns home where she finds a young fan asleep in her bed. As the youth gushes her love for Eve, she offers to pack Eve’s bags for Hollywood. When Eve leaves her alone, we watch the young lady confidently take a seat at Eve’s mirror, and put on her make-up….the cycle has begun again, and leaves you with a spine-tingling chill of satisfaction!

All in all it was an enjoyable evening, the acting was good, but it competed too much with a multi-media approach of sound and vision which would be best left to the film set.

All About Eve ran at the Noel Coward Theatre, London from 2nd February to 11th May 2019.