I don’t think I was the little girl my mother had longed for. Ideas of wearing pretty dresses and playing with dolls were thrown out of the window very early on. I would proudly push my pram down the road with her, but it didn’t contain a doll; that had been defaced and beheaded long ago…no, my pram was full of cuddly toy animals. If I wasn’t playing with them, I would be playing with my train set. Yes, a train set, a clockwork locomotive designed to keep me away from my older brothers’ electric train set. My train was really boring….it just went around in a little circle. Now my brothers’, well they had a huge trestle table with a hole in the middle, and lots of tracks with points and signals…countryside painted on the walls surrounding it, endless amounts of Modroc used to create hills and valleys, freight trains, steam trains that puffed little clouds of vapour, diesel trains…it was great fun, even when I was shouted at to keep my little sticky fingers at bay!!

Neither of my parents drove so the train was the preferred mode of transport. British Rail weren’t too good at being on time so connections were always missed, and so to pass the time, me dad and I would go train spotting. I’d scribble numbers in my notebook whilst dad shouted them out to me, and then at the end of the day we would cross them off in a special book we’d buy from John Menzies (yes I am that old) at Chester railway station. At the end of the year you would see how many numbers you had crossed off in the book before starting again the next year!

I don’t train spot anymore, but the sight of a steam train always brings great joy and when a diesel locomotive roars past me if I’m sat at a station, I test myself to see if I can still remember what class of engine it is. Suffice to say, a heady mix of trains, theatre and crime novels was too good to miss; I figured this would be a fun-filled way to spend a Sunday afternoon.

LipService Theatre (Maggie Fox and Sue Ryding) have been described as the Laurel & Hardy of literary deconstruction. Having watched Mr Darcy Loses the Plot a couple of years ago, I can see why. Their knowledge and ability to turn the mundane into something hilarious is one to be appreciated; part stand-up, part live acting and part film projection, it is a perfect heady mix of virtuosity and jubilation. 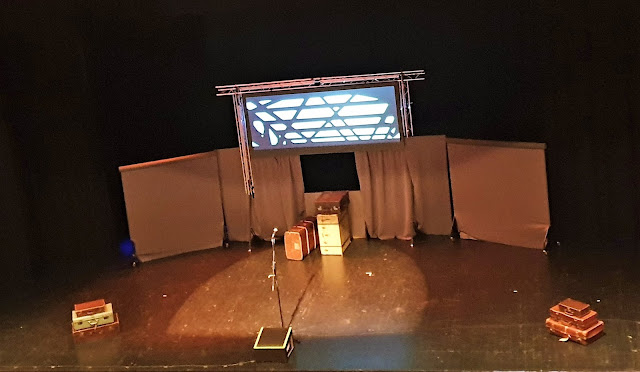 Strangers On A Train Set pulled into The Lowry, Salford Friday 17th May 2019 and departed on the 19th May 2019 to resume its tour around the country. For those of you who have never seen LipService, then be warned, it has developed a bit of a cult following around various venues, so grab your tickets quickly when you see them heading your way or you’ll miss out on a treat.

Derek and Geoff (Fox and Ryding) are two model train enthusiasts who have been invited to Salford to showcase their 00 gauge model railway, and recreate some classic railway journeys via steam locomotive or Geoff’s favourite, his modern Virgin Pendolino.

When it comes to their trains, no detail goes unnoticed. For authenticity, Geoff has lovingly scuffed his Pendolino with cat litter, to
give it that authentic worn look, as though it really has clattered mile upon mile along the West Coast route from Manchester to London Euston. Although they have paid great detail to their trains, the tiny figurines that adorn their railway set have been paid less attention, which is why we end up with the unlikely scenario of a 21st century youth being shouted at by a 1930’s amateur sleuth on the said Pendolino! We meet equally bizarre characters along the railway journey through various train-based books and films, some of which are easy to spot, whilst others morph into generalisations of many classic scenes we’ve read or watched!

LipService might only consist of two actors, but they use ingenious touches to move between the real world of Derek and Geoff and the fictional world of what is happening within the train set. Video projections show Derek and Geoff playing with the train set, whilst on stage, the little plastic characters become real, moving, talking humans! The actors know that despite this clever use of flipping between stage and screen to give time for costume changes etc, there are still some limitations as to what they can do, so they incorporate jokes about the fact you can’t have three people in a particular scene, or the need for using a doll to stand in for a third of the Railway Children, as there are only two actors!

I am not a fan or player of computer games, and the first parody left me a bit dazed and confused, although a number of people around me obviously understood what was going on as they were heartily laughing around me, but fortunately, unlike the old British Rail Timetable, that sketch departed and a new sketch that had me on more familiar ground pulled onto the stage. Their pastiche of Brief Encounter (Briefs on the Counter) had me holding my sides with laughter. It is one of my favourite films, so to see Maggie Fox’s hilarious take on the terribly, terribly well clipped tones of Celia Johnson was truly brilliant. All my favourite moments from the film were there…the innocence of returning a library book, the “oh, I appear to have something in my eye” all the way to the repression that only a “fresh this morning” bath bun could convey, was squashed into a few hysterical minutes that could run and run….and run and run!

You couldn’t have a play about crime novels and trains without playing homage to Agatha Christie. From super sleuth Miss Sparrow, sitting knitting and taken immediate dislike to the youth with the loud music emanating from his mobile phone, to the locally renamed 4:50 from Piccadilly (Expected arrival time 4:57…58…59??!!!) this production sped along just like the Murder on the Trans Pennine Express! 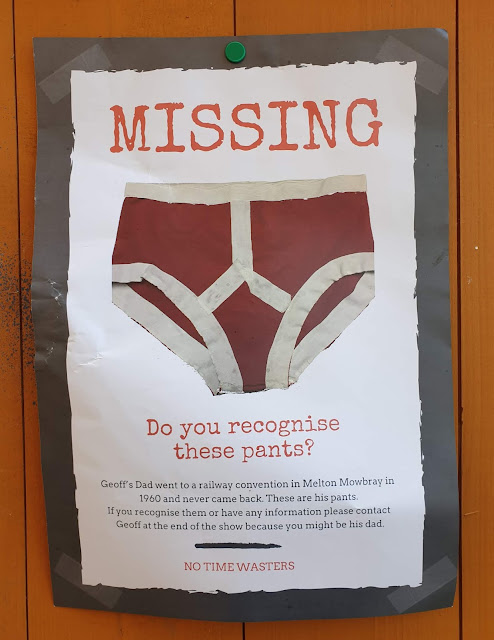 At times the production shunts back and forth, so just as you think you are in the middle of a Miss Marple sketch, it suddenly switches tracks to The Railway Children which leads to some elements of confusion, but that doesn’t matter, as the name of the game here is to depart your theatre destination far happier than when you arrived. What is truly enjoyable is watching how well Fox and Ryding work together. If one makes a slight slip the other is there to quickly transform it into a gag, as though it is just another part of the show. This is the genius of great comedy partnerships, and just like the legends of Tommy Cooper and Eric Morecambe before them, Fox can stand on stage saying nothing, but just one look and you can’t stop laughing.

Whether you are a train enthusiast or not, this clever and hugely enjoyable show is just the ticket to letting off steam in today’s all too serious world! If you see it running near you, flag it down and go see it! I’m off to the refreshment car in Coach C to see if Denise still has that egg & cress butty she announced half an hour ago…I bet her card machine won’t be working…