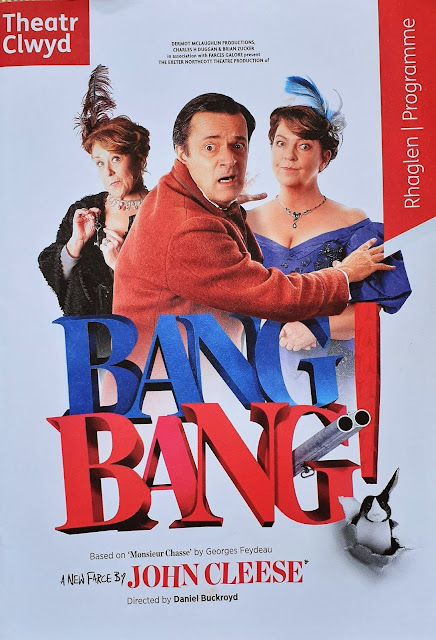 John Cleese, best known for Monty Python and Fawlty Towers has decided to tackle a little-known play by George Feydeau as his stage writing debut. This vaudeville styled French farce is the perfect antidote to the long working week; based on a series of comic situations which get more and more ludicrous as the play continues, it is a feel good fun fest that will have you laughing down the aisles and putting all your stresses and worries behind you – or at least for the duration of the play.

George Feydeau was born 1862 in Paris. He was the son of a novelist and at the age of 20 wrote his first comedy, but it wasn’t until later, whilst in the army, that he wrote his first play The Dressmaker. It was a success, but it had George thinking about the farces that he had watched whilst growing up. He felt that the characters were mere puppets of themselves and that if you stood back and looked at the tedium of reality, it was often highly preposterous. He therefore started to look to real-life for inspiration, keeping the interesting personalities of those around him and then throwing them into burlesque situations.

Feydeau wrote some 60 plays, and they were often noted for their complex plots, full of wit and great vivacity, together with coincidences and misunderstandings. It is the type of entertainment that stands the test of time, and perhaps why more modern-day incarnations of the farce, such as Fawlty Towers, is fondly thought of by the masses. At the time, Feydeau’s work was just seen as light entertainment, however, he is now seen of one of France’s greatest playwrights. His works are perfect for revival and very popular with new audiences and he is the perfect choice for John Cleese to adapt for the British stage.

Léontine is a respectable member of Parisienne society and the wife of Duchotel. Duchotel is a keen huntsman and will often disappear, packing his shotgun on the pretext of a hunting trip, and instead heads off for a long weekend with his mistress. The abandoned Léontine is left to be entertained by Duchotel’s friend Dr. Moricet. On one particular occasion, Léontine announced to Moricet her undying love for him. He tried to take advantage of the situation, but Léontine vowed that as long as her husband was faithful to her, she would remain faithful to him.

Eventually Léontine realises that her husband has hoodwinked her…he might be spending his weekends away hunting…but it’s not the type that requires a shotgun. She does what any rational woman would do – she vows to take her revenge! Poor Duchotel, the more he tries to hide his secret, the more his world unravels around him, and thus the comic capers begin to spiral out of control.

The play has been written as the perfect comic caper, allowing the actors to have fun with their characters and play up to the audience which is an integral part of the play. The more the audience reacts, the better the play flows and I’m pleased to say the audience around me were screaming with laughter as they dropped their inhibitions and sat back and enjoyed the madness surrounding them. It retained all the hallmarks of the traditional French farce: adultery, slamming doors, an operatic outburst, a dim-witted country bumpkin, the know it all French maid complete with the disapproving countenance and of course, the husband/wife/lover following one another onto the stage but without seeing one another.

Whilst the play is not a morality play (just comic capers) it does beg the question, that if your husband is cheating on you, then is it ok for you to cheat on him? What a predicament Léontine finds herself in! But then, the original title Monsieur Chasse (Mister Hunting) gives the game away – this is man hunting like you’ve never seen before. By the time Léontine has finished with him, you wonder whether he is the hunter or the prey.

Feydeau/Cleese have provided us with an entertaining evening full of glorious misunderstandings by those on stage. It was a very talented cast, who took to their roles like a well-oiled machine, which is essential to make this type of production work. The slicker they are, the funnier the comic capers are. Tessa Peake-Jones (Raquel from Only Fools and Horses) was terrific as the quietly vengeful Léontine.

Tony Gardner (John in Last Tango in Halifax) had the essence of John Cleese about him as he played the philandering Duchotel. There was the sharp Cleese energetic comic exuberance as the plot began to pick up pace, and you could see a hint of Basil Fawlty as things went from the sublime to the ridiculous. He left you squirming in your seat as you watched him try to cover up his sojourns to the country by bringing back a hamper full of a mixture of rabbits and hares which would never normally be found together (unless bought from a butcher!)

Wendi Peters (Coronation street’s Cilla) may only have had a small role as Duchotel’s mistress Madame Latour but she packed a punch as the Countess fallen from grace and operating as a concierge. She held the audience’s attention whilst the set was being changed and she belted out a rousing music-hall style piece about her downfall with a lion tamer with such gusto that she nearly brought the house down.

This was a production full of theatrical happiness and mayhem, something we can all do with from time to time. With hindsight, it was almost like watching an unrecorded episode of Fawtly Towers which had been transported from 1970’s Torquay to 1890’s Paris. Léontine had elements of Sybil about her, Duchotel was reminiscent of Basil, Dr Moricet could have been mistaken for the Major, and of course, the acerbic tongued French maid could have been Polly. No wonder it was such an enjoyable evening.