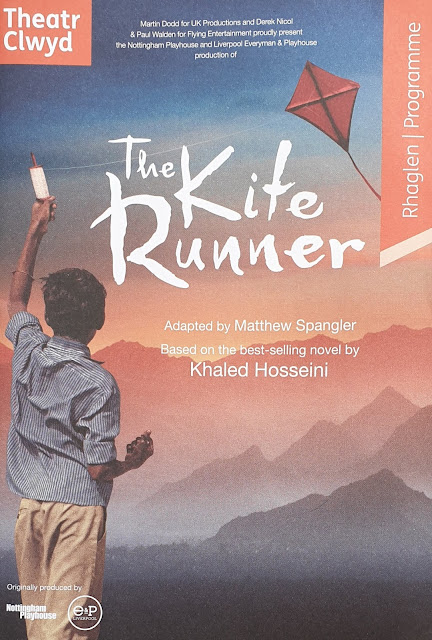 I’ve not read Khaled Hosseini’s novel, I’ve not watched the film and I missed the stage production when it arrived at Theatr Clwyd last year. I had heard rave reviews and so I was thankful that this time round I would be blessed enough to see the stage production…and I wasn’t to be disappointed. The reviews from friends and strangers were spot on. The production was spellbinding and a superior history lesson than either the media or the classroom could give you.

The Kite Runner commenced life as a novel by Khaled Hosseini and it tells the story of Amir and his best friend Hassan (who is also his servant). Kabul was a tranquil place, people lived in harmony experiencing a conventional way of life. Privileged families would attend lavish weddings, full of colour and splendour and take family picnics in the foothills of the Hindu Kush to escape the heat of the city.

Kite flying, which probably originated in China about 3000 years ago, was turned it into an art form in Afghanistan, by taking on a different competitive twist. Enjoyed by both men and boys, this was a competition that was less bloody than dog fighting and very cheap, so anyone had the opportunity to join in. A person would just need some bamboo to make a frame and some brightly coloured tissue paper to stretch across it. For those with money, they could visit the Kabul bazaar where professional kite makers would hand down their skills from father to son. Tiny pieces of crushed glass would be painstakingly glued to the kite string for competitors to slash their opponent’s kite string, bringing their kites crashing to the ground. The poorest boys, such as Hassan, would rush to collect the losing kite for their friend or master – these were the kite runners.

Matthew Spangler’s stage adaptation of the novel is told in the first-person narrative through the eyes of Amir (David Ahmad.)  His tale which starts in Afghanistan as a child, transitions through to adulthood where he is living in America and it transports us through a harrowing journey of life and intimate relationships: father/son, best friends, husband and wife.

Before the play commences, Hanif Khan takes to the front corner of the stage and starts playing complex rhythms on the tabla, two barrel-shaped small drums, which set the scene and provide an underscore to the play. He starts and stops on certain words throughout the play, pausing for key moments and providing another element of intense drama throughout.

The storytelling in the first act is very engaging. David Ahmad’s transition from playful child to adult narrator, is seamless and the early scenes between him and Hassan (Andrei Costin) are beautifully choreographed and full of such warmth that you can’t help but have a sense of foreboding as to what is to come. Hassan would be lost without his close friend Amir and would do anything for him. There is a sweet, naive quality to him, which makes the betrayal of Amir even harder to swallow.

Afghanistan is a country that has been under invasion since the time of Alexander the Great. The country may only be about the size of Texas, but the landlocked country was the gateway to Asia from the Middle East. When the play commences, Afghanistan was a country at peace. It had been since 1919 when the British finally recognised Afghanistan’s independence and moved their forces back inside the border of the Indian Empire. The country was run by Zahir Shah who was more content to read poetry than try to exert any political power over the country. In the 1950’s when the Cold War started, he didn’t take sides and kept his country out of the conflict by diplomatically taking aid from both the Americans and the Russians!

Of course, there were political divisions within the country, but they were not causing violence at this time. The Pashtun were Afghanistan’s largest ethnicity and lived in the South and East of the country, they were the people who supplied the Kings of Kabul. To the North and west of the country, the second largest group was the Tajiks. Their language Farsi became the language of the country’s court, art and literature. The Hazaras accounted for about 10% of the population and were part of the Islamic Shia sect. however their distinct Central Asian look always had them suffer discrimination.

For the traveller, Afghanistan was a country full of colour and vigour, with stunning scenery. Its mix of narrow gauges, mountains and deserts enticed adventurer to make their way across the country on their journey through Europe towards India. Travellers could move to a slower pace, relaxing for days in tea houses strewn with beautiful carpets and cushions and sampling the exotic fruit and nuts of the country. Family was at the heart of everything, and this carefully woven story shows the importance and strength of the relationship between father and son.

It’s hard to think that it was the year I was born when the peace and tranquillity of Afghanistan began to diminish. The King was overthrown by his cousin and two new developments occurred in the hope of ending the high illiteracy rates in Afghanistan. A group of Islamists wanted to halt the rise of Western customs and return the country back to its religious values.  It was also the rise of the People’s Democratic Party of Afghanistan (PDPA), who were a pro-Soviet group who wanted land reform and mass education. In 1978, the PDPA were victorious – gaining power via an army coup.

The Soviet Union invaded the country in 1979 in order to assist the PDPA in their hopes of modernising their country, however, this caused more harm than good. A vicious war ensued and well-off families such as Amir’s were targeted as counter-revolutionaries. Just like Amir and his father, the wealthy fled to Pakistan where they thought they would be safe.

The play commences in the 1970’s. Amir’s father Baba (Dean Rahman) is a wealthy man with tradional values. David Ahmad’s narration recalls the events, the twists and turns that occur over a short timeframe in history, that lead them to fleeing to California as a refugee and what him and his father found when they arrived upon American shores. Baba and Amir are Pashtun Sunni Muslims, Hassan is Hazara Shia, but despite both the difference in social backgrounds, there is a unity and warmth between the two. This unusual friendship comes to the attention of the local bully Assef (Bhavin Bhatt) and the violence that ensues is stomach churning.

Amir is desperate to impress his father and he believes he can do this by winning the kite competition which is due to take place. Hassan is an exceptional kite runner and the two friends are convinced that between them they will win the competition and earn the respect of Baba. History will play a huge part in what lies in store for these best friends and the inevitable different paths they will be forced to take. No-one could foresee the repercussions that would take place following the competition nor the terrible incident which would shatter their lives forever.

Following the war, the mujahedin (Islamists) held the fate of the country in their hands. At the time, the US was seen as the West’s enemy. As the Islamists were fighting the West’s foe, Britain armed and financed them; this included a name now familiar to most people – Osama Bin Laden.

Reports by Westerners walking around Kabul at this time advised that it was still safe to walk the streets. There were arrests, but the city wasn’t being destroyed by car bombs or suicide attacks. Even the women were still given the freedom to work in public posts such as offices, banks and shops without the need to cover their heads. In university campuses, the female students attended lectures alongside their male counterparts and were still allowed to wear western style dress (short skirts) as they had done during King Zahir Shah.

In 1985, Mikhail Gorbachev became the new leader of the Soviet Union. He could see that in the Afghan countryside, the traditional role of women still applied. They were largely confined to their homes and western influences could not pervade these homesteads. He saw it was a futile war that he could not win and he withdrew his army. Following the withdrawal Kabul was still under the control of Najibullah Ahmadzai (President of Afghanistan from 1987 until 1992) however in 1992 the mujahideen took over Kabul and turned their guns on one another.

When the Talban, a group of younger jihadis who threw out their elder warlords, took over the country in 1996, kite flying was outlawed. They enforced a strict policy on women and any un-Islamic conduct. Under Taliban rule it was the women who suffered the most, they could no longer work outside of the home or attend school after the age of eight. The burqa became mandatory, and they had to be chaperoned by a close male relative if they were required to leave the house. Music, TV and other forms of entertainment were banned, even weather forecasting was outlawed, but it was kite flying that was despised by the regime.

Anyone who was noncompliant to the regime would be met with harsh punishments from beatings to having fingers or hands cut off or even public executions. A country that had one enjoyed the freedoms of the Western world had been transported back to the old ways of the Pashtun countryside. The freedom that we saw at the beginning of the play was well and truly over for Amir, Hassan and Baba. 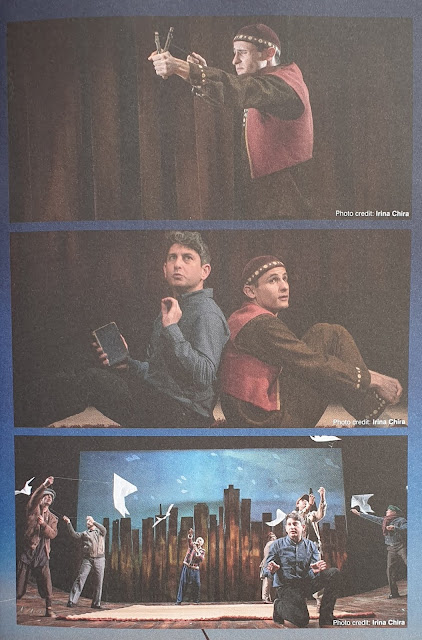 For you, a thousand times over.

The production relies heavily on David Ahmad and he features on stage throughout much of the performance. We watch his metamorphosis between the adult and child Amir and it is through this, despite his cowardice and betrayal towards his best friend, that you can empathise with him. You can see the dilemma he finds himself in and why it is not as easy for him to tell the truth as one would have hoped he would have done.

The reverse of this is true with Andrei Costin playing Hassan and then later his son Sohrab. His loyalty and devotion is both inspirational as you watch him try to understand and tackle the bullying and racism that he encounters at the hands of Assef, who starts off as a violent bully before emerging later as a Taliban terrorist.

Dean Rehman’s portrayal of Baba is an interesting one. He starts the play as a rich man, powerful, a name in society. He is kind and benevolent to his servants, taking an interest in Hassan, never forgetting his birthday, but despite all his wealth he can do nothing once his country is invaded. He is like all the other refugees fleeing the country with only a suitcase to show for his past life. His despair at being forced to leave the country of his birth is distressing to watch, as is witnessing his further battles once he moves to America.

I think it is easy for people to forget the reasons why people become refugees. Individuals see stories in the tabloids and focus on the attention-grabbing headlines, but the human stories are often bypassed or forgotten about in these political point scoring articles from the gutter press. That is why I started this account by saying “The production was spellbinding and a superior history lesson than either the media or the classroom could give you.” That is the joy of the theatre. It is a magical place of emotional engagement which opens its doors to educate, entertain and allows for a discussion over a cold glass of wine afterwards.