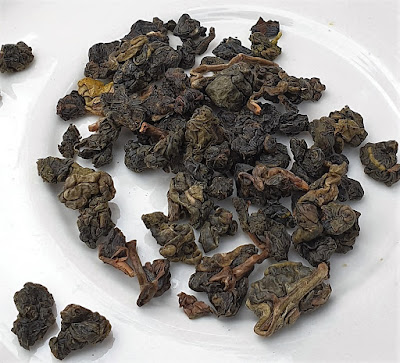 I know – it’s been a while since I’ve written about tea. To be fair, I’ve never stopped drinking the stuff, or indeed making notes about it, however, getting those notes and relevant photo’s onto a blog page seems to be my permanent downfall. (Actually, having started organising the files on my laptop during lockdown, I also realise there are a number of outstanding theatre posts I’ve semi-written which have never seen the light of day either.) So… whilst the sun is trying to shine [???!!!!???? - well it’s not raining for a change] I shall endeavour to catch up….and then we can start afresh on all the glorious productions I’m catching up with via Ye Olde Gogglebox.

Today, I am sitting in the garden editing my post about the play Bang Bang! I nearly made a pot of gunpowder tea to assist me, instead, this golden box of joy was shouting out for my attention.
T2 is an Australian tea company (Melbourne to be precise, the first store opened in 1996 in Fitzroy, Melbourne) and whilst I’ve seen their shops dotted about on various UK high streets, I confess I haven’t set foot inside one. Instead, the boxes of T2 tea that I own are both gifts. 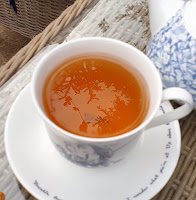 Surprisingly, Oolong tea only accounts for about 2% of the world’s tea, but whilst many people may be unfamiliar with it, it is certainly something a tea lover should try consuming. Oolong tea contains various vitamins, minerals, polyphenol antioxidants and amino acids which are supposed to have many health benefits. It is a traditional form of Chinese tea made from the partially oxidized leaves of the Camellia Sinensis plant. Green tea has leaves which have not been oxidized a great deal, black tea leaves have been oxidised a lot. Oolong tea is somewhere in the middle of this oxidising process, and therefore depending upon the retailer, the tea you buy can vary from green to brown in colour.

Studies have shown that Oolong tea may reduce diabetes, help with heart health, improve brain functions, protect against various forms of cancer, and my favourite since being incarcerated at home…weight loss. [TV film + Oolong tea = not turning into Homer Simpson!] Well one can always dream.

Once hot water is added to the grey/green/brown pellets, the leaves unfurl to produce a tea which is a light golden green in colour. It has a light and subtle flavour which increases on the second and third brews. (I normally make a pot of tea which fills a cup, then I fill a flask with hot water and can make several brews from the one pot of tea leaves.) 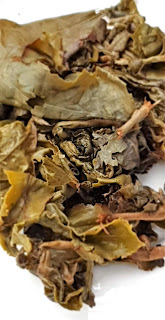 Formosa Oolong is a darker type of Oolong tea from the Taiwan (formerly Formosa) province, giving the tea a slightly sweet dried fruit flavour. This particular product reminds me of an autumnal day, as it has a pleasant earthy/grassy/leafy scent which transfers onto the taste buds when drinking. It is a refreshing brew with a slight astringency to it, but it is moreish and makes for a nice dependable but not overwhelming brew.

Upon checking T2’s website – the Oolong Formosa no longer appears to be available – however, they have a similar style standard Oolong https://www.t2tea.com/en/uk/tea/oolong-loose-leaf-gift-cube-T105AE003.html which has similar tasting notes.