Looking for the Third Star in Pembrokeshire

September 06, 2015
So excited. My travel buddy got herself a new job this year, less money, less holidays, but less stress so we've not been able to have a week abroad exploring this year :-( This weekend however, we're going on a little road trip!!!

I had introduced her to the most wonderful film ever, Third Star. You may not have heard of it, but I suggest you check it out. The premise of the story doesn't sound like a barrel of laughs, James (Benedict Cumberbatch) has terminal cancer and he's not going to see his 30th birthday. Rather than being a sentimental walk in the park, this is a great story about a group of four male friends, coming to terms with the news, and having one last trip together. Their trip was to Barafundle Bay in Pembrokeshire, Wales. It is a beautiful place, I holidayed there way before the film was ever made, and the film portrayed the beautiful land and seascapes of that part of the world.

I should also comment on the beautiful moving script, it was fantastically written, and interestingly you can buy a copy of one of the drafts of the script, together with a commentary of the making of the film. It is a really interesting read, especially if you watch the film directly afterwards so that you can see the changes that have been made and what bits did not make it to film. It is noted in the book that the character of Davy (Tom Burke) had quit his job to look after James. In the film this is never mentioned. In some respects it would have been nice to know that Davy had made this sacrifice, but upon reflection, Davy had a lot of humility, and I doubt it was in his nature; he does things because they are right, not because he wants veneration.

There are great performances by the other two main characters Bill (Adam Robertson) and Miles (J J Field). The cameo's by Hugh Bonneville and Karl Johnson are also superb and will have you chuckling! Hmm can you tell I rate this film rather highly?!

Anyway, my friend agreed, the place was beautiful, we should go there. She wanted a trip away to see the sea, I wanted to go location spotting! So I have been doing some homework, she arrives tonight, and first thing in the morning we are making the four hour cross country drive to Pembroke!

I'm not really one for long distance driving, I hate motorways, but there are no motorways to Pembroke, it's all small winding roads, and I really enjoyed the drive. A dry sunny day, and the views were spectacular as we drove through stunning scenery of the welsh hills and valleys.

Headed into Pembroke just in time for lunch. The hotel we will be staying in is the Old Kings Head. http://www.oldkingsarmshotel.co.uk The hotel is apparently one of the oldest in Pembroke, if not the oldest. It has deeds going back to the 1500's! It was a great quirky building with friendly staff. We had lunch, and then as it was a nice day wandered up the road and spent the afternoon looking round Pembroke Castle.

It was great. All the children were back at school so we had the castle almost to ourselves! A great find was Wogan's Cavern, a natural limestone cave underneath the castle. There were 55 slippy steps to descend to view it, but all good Burketeers know how to handle slippy steps!

As we had had lunch at the hotel, we thought we'd try a local pub (The Waterman's Arms) for dinner, and we sat outside on a terrace overlooking the Mill Pond. A relaxing evening, eating great food, and supping a few well earned pints of Guinness! 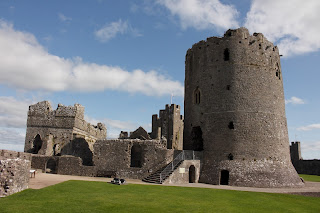 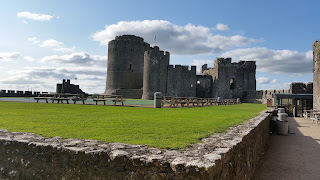 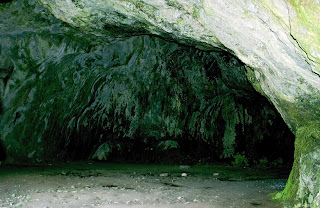 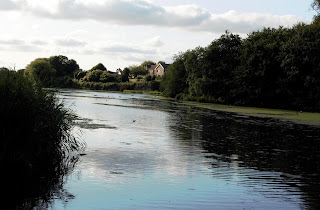